Even food staples grown in Russia are soaring in cost, providing a glimpse of the hardship that awaits consumers after waves of sanctions over the invasion of Ukraine set off supply shocks and a steep currency devaluation.

Most of the hearty ingredients needed to make borscht, considered comfort food in Russia and much of eastern Europe, saw double-digit price increases in a single week, with onions soaring more than 18% and cabbage nearly 16%. Residents of some regions had to fork out over 40% more for some of the basic foodstuffs needed to cook a savory pot, which also features beets alongside potatoes and carrots. 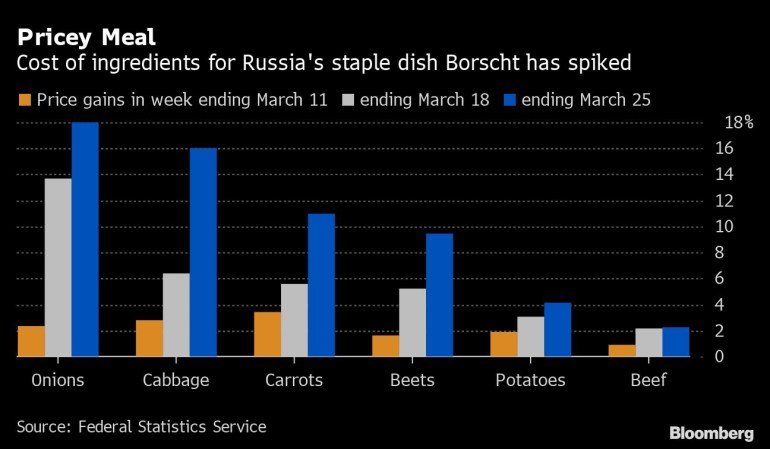 The dire economic costs of President Vladimir Putin’s war in Ukraine are becoming clear after it spurred a multitude of sanctions and prompted foreign companies to pull out of the country. The stark increases in what Citigroup Inc. once called the “Borscht Collection” of staples disproportionately affect worse-off Russians and can translate into even higher inflation expectation.

A Bloomberg survey of analysts this month showed inflation may average 20% this year, which would be the fastest in about two decades. Russia’s economy is on course to contract in two consecutive years for the first time since the collapse that followed the Soviet breakup three decades ago. 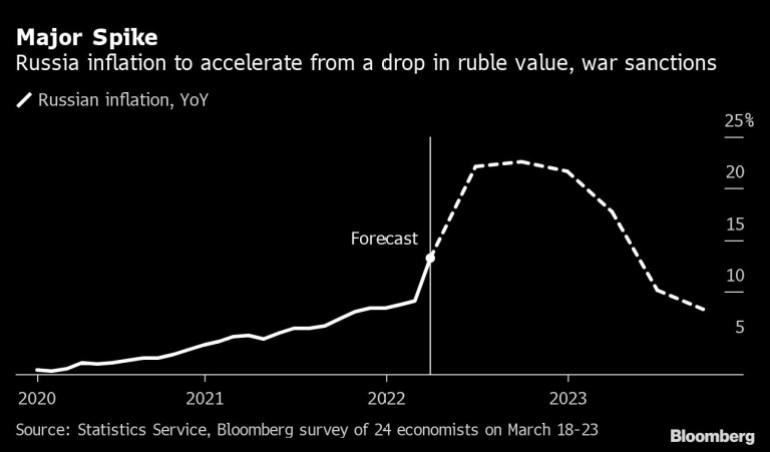 A wave of panic buying that took hold in Russia after its attack on Ukraine in late February initially led to a dramatic runup in the cost of durables like cars and televisions sets. But it’s the cost of basic goods that’s now coming under pressure as consumers try to stock up for the future.