Trading volume on the $51 million Central and Eastern Europe Fund (ticker CEE) managed by DWS Group spiked in recent weeks after major Russia-focused exchange-traded funds were halted. Nearly 1.4 million shares were exchanged during the week ending March 18 amid news of peace talks between Russia and Ukraine, the highest weekly trading volume since 2006, according to data compiled by Bloomberg.

Piling into CEE doesn’t come without risk, and it’s not all geopolitical. Closed-end funds — unlike ETFs — issue a fixed number of shares, so their trading price can quickly diverge from its underlying assets as demand for the shares shifts. CEE traded at a nearly 24% premium on Thursday, the highest on record for a fund that typically trades below the value of its underlying assets, making it difficult to use the fund as a tool to closely track Russian stocks. And most of the fund’s Russia-linked securities are depository receipts, which are still halted on exchanges and therefore difficult to value.

“There was nowhere to trade, no one could make bets on Russia, no one could hedge their exposure, so a lot of people came here,” said James Seyffart, ETF analyst at Bloomberg Intelligence. But, he warned, “anyone trading these things is playing with fire right now.” 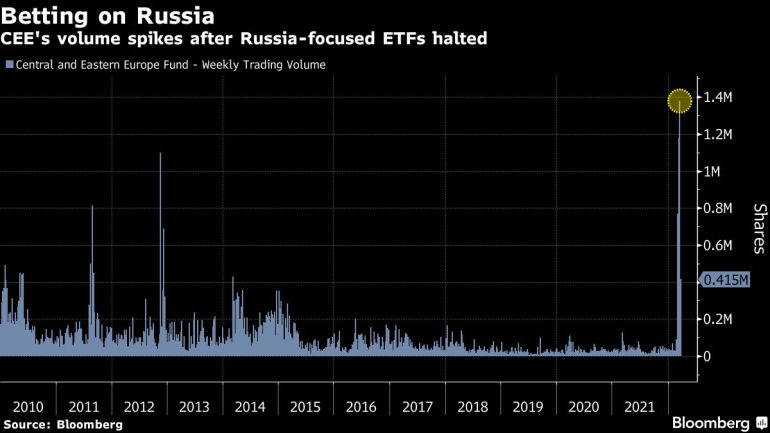 Since closed-end funds aren’t required to report holdings daily, investors don’t know what they’re holding in real time and may not understand how they value their assets.

Roughly 60% of CEE’s holdings were in Russia-linked securities, as of Feb. 24, disclosures show. By March 14, they’d marked virtually the entire allotment down to zero. While Alrosa PJSC, the only local Russian stock that the fund holds, resumed trading this week in Moscow, the remaining Russia-linked securities were depositary receipts.

Securities are given a “fair value” if their market prices are not readily available, which for CEE is the amount that it “might reasonably expect to receive for the security upon its current sale,” DWS said in a statement. But any valuations assigned to CEE’s Russian securities are “subject to change and may be reduced to potentially as little as zero,” according to the firm. Such securities could actually be worth nothing if Russia is completely shut off to foreign investors, Seyffart said. CEE doesn’t plan to make new investments in Russian securities, the firm said.

Meanwhile, CEE is trading at a premium as demand for the fund has likely exceeded the amount of available shares, Seyffart added. Investors may be wanting to play the Russian market or hedge against trades they have on other Russia-linked securities that are frozen, he said. But these moves are risky, since “there’s no guarantee that it’s going to correlate to the price of the underlying assets.” 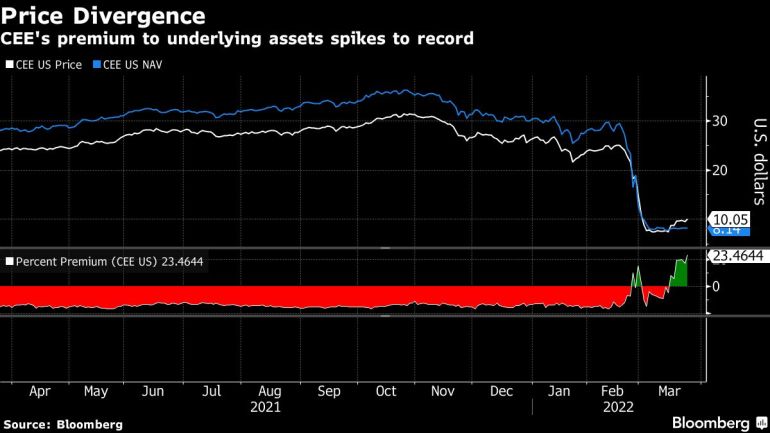 Russia-focused ETFs could also lure investors away from CEE, if and when they begin trading again, said Todd Rosenbluth, head of research at ETF Trends. This could lead to lower liquidity for the fund and make it difficult for investors to exit their positions, he added.

Before Russia-focused ETFs were halted, they suspended share creations, making them behave similar to a closed-end fund. But such ETFs made purer bets on the country and offer more transparency than CEE, Rosenbluth said.

“Investors’ comfort with ETFs has surpassed their comfort in using closed-end funds, so I do think the ETFs are more likely to win out.”

–With assistance from Emily Graffeo.