Fifteen years ago, Vladimir Putin had a problem. AvtoVaz, maker of the favored car brand of the communist era, was the butt of jokes (How do you double the value of a Lada? Fill the tank.) The state-owned company was struggling to cope with competition from foreign automakers that ventured into Russia after the collapse of the Soviet Union.

Despite AvtoVaz’s troubles, when the Kremlin put a stake in AvtoVaz up for sale in 2007, Western manufacturers lined up. Renault prevailed over the likes of General Motors and Fiat, with Putin betting superstar executive Carlos Ghosn would respect the Russian identity of the company much like he had managed the proudly French and Japanese members of the word’s biggest auto alliance.

Landing Lada turned out to be a pyrrhic victory. Renault announced Wednesday it will write off the value of its €2.2 billion ($2.4 billion) worth of assets in Russia, an amount equivalent to roughly a third of its market capitalization. It’s also assessing options for its more than two-thirds stake in AvtoVaz, an operation with a whopping 45,000 employees.

For weeks, Renault was reluctant to join the mass exodus of companies from Russia. Shutting down plants and cutting off trade was going to be far costlier for the carmaker than its rivals. Renault sold more than 480,000 vehicles in the country last year, second only to France and more than double its deliveries in any other nation. 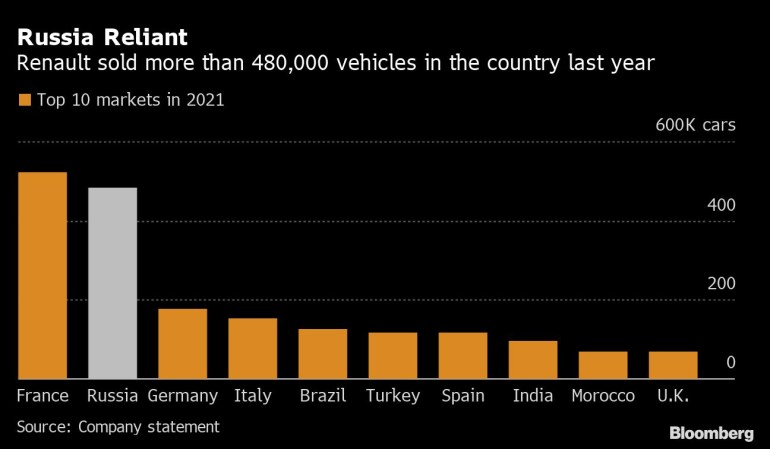 With no good options to choose from, Renault tried maintaining some semblance of status quo. Days after Russia invaded Ukraine, the company temporarily halted its assembly plant near Moscow due to supply and logistics issues. AvtoVaz succumbed to the same strains, but both set dates for when they planned to resume operations.

When Renault reopened the Moscow facility this week, the blowback was severe. A member of parliament called for a U.K. boycott, and Ukraine’s foreign minister followed suit soon after. Within hours, the company caved, suspending activity at the Moscow factory.

Renault was on shaky ground before Russia’s invasion. Ghosn’s unceremonious ousting from Nissan in late 2018 destabilized the two companies’ alliance almost to the point of complete rupture.

Chief Executive Officer Luca de Meo’s plan to turn Renault around called for the carmaker to make still-meager profit margins for years to come. Fitch Ratings has warned this tenuous recovery could be derailed. The company’s market capitalization has now fallen back below the value of its stake in Nissan. 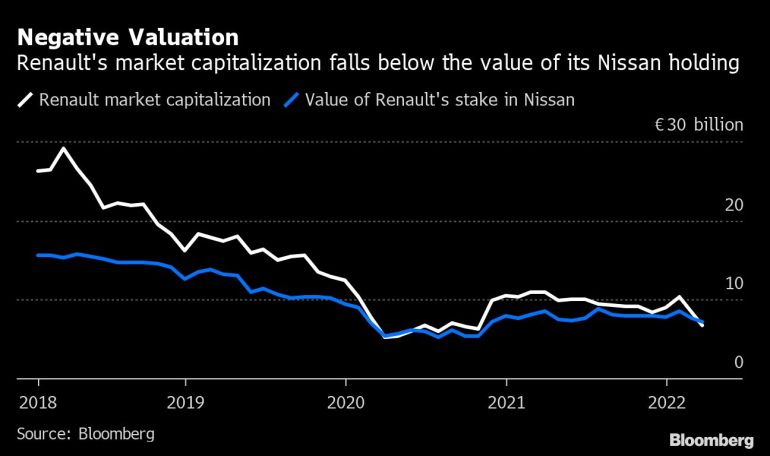 De Meo hasn’t spoken publicly about what went into Renault management’s thinking about staying or going. If the reversal of decades of investment in Russia by foreign businesses is permanent, it could lift AvtoVaz — Lada used to command almost 80% market share. For the time being, however, sanctions will decimate the economy, and the asset has proven too toxic.

De Meo’s counterpart at Renault’s biggest rival, Stellantis CEO Carlos Tavares, is one of increasingly few Western bosses who has tried to justify keeping assembly lines running. He said early this month pulling out of Russia would hurt workers, not Putin.

“I don’t buy that we need to make announcements on pulling back or not,” Tavares told reporters. “What’s important is that we take care of the people.”

Given how quickly the pressure campaign on Renault forced its hand, Stellantis’ van factory near Moscow may not operate for much longer.