By Alia Chughtai and Marium Ali

Pakistan’s economy has been battered by rising inflation, COVID, supply chain shocks and high energy prices over the last few years. But in that world of constant shocks, its booming startup sector is turning out to be a silver lining for the country.

In 2021, 83 startups raised $350m according to Invest2Innovate, a Pakistani consultancy firm. And so far this year, the sector has already raised $136m.

Kalsoom Lakhani, the founder of Invest2Innovate and general partner at its sister firm i2iVentures, an early-stage investor, says 2021 was a record-breaking year and says people will question if the momentum is sustainable.

“What’s really important is for the ecosystem to also be building the health overall,” she told Al Jazeera, referring to startups and investors preparing for things such as how to grow the talent pipeline to meet the needs of these fledgling businesses, or how to improve the policy and regulatory environment to help them grow. “So while this momentum is exciting, there needs to be strengthening of these pillars in order to create sustainability and longevity and the continuing growth of the startup ecosystem,” she said. 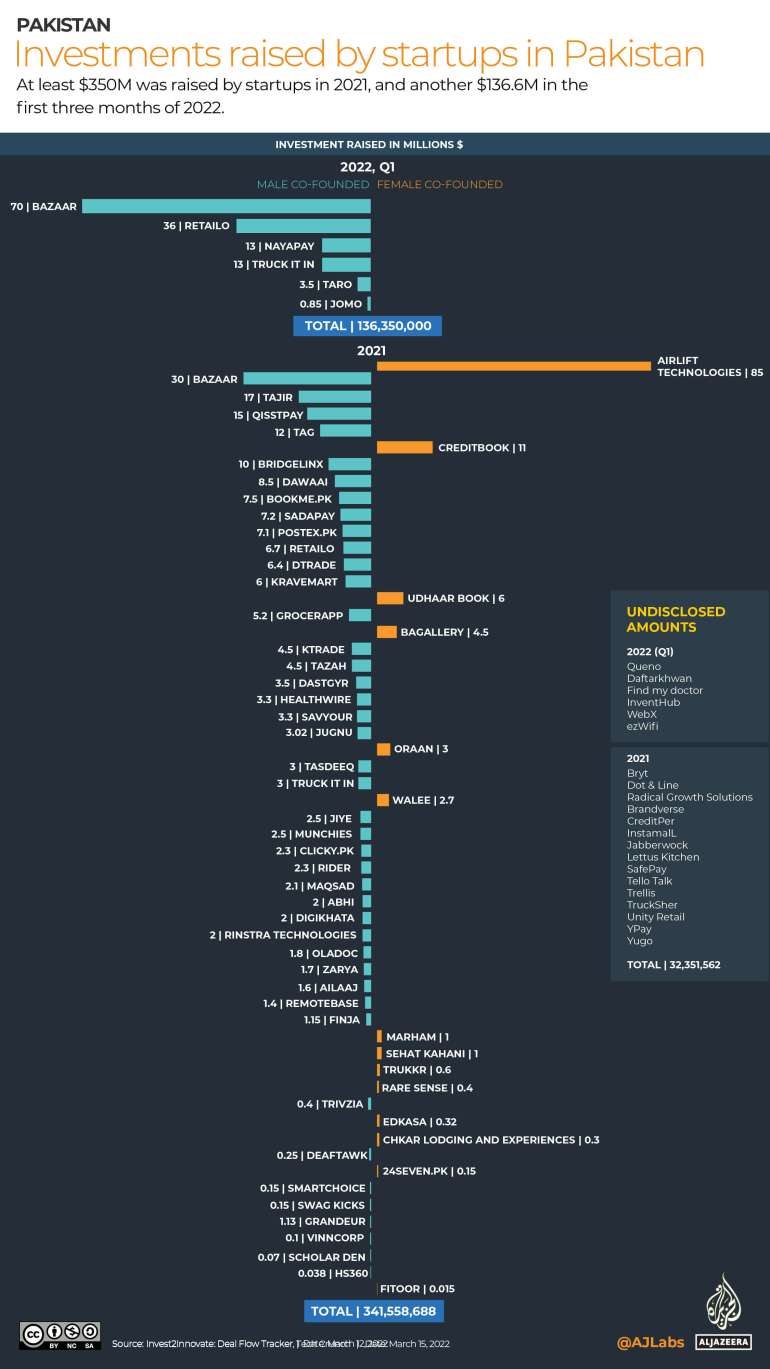 COVID-19 was a catalyst for the startup landscape in Pakistan, which saw investments rise from $65m in 2020 to $350m in 2021. Extended lockdowns and quarantines provided entrepreneurs the opportunity to create digital products with a human impact.

With more than 250 startups since 2015, an increasing internet penetration driven by low-cost smartphones – there were 184 million cellphone users at the end of 2021 – and affordable data, Pakistan is one of the final few untapped markets for startups and investors to offer internet-based services similar to those in other parts of the world. These services include ride-hailing, and food and grocery delivery, among others.

Faisal Aftab, CEO of Zayn Capital, a venture capital fund and one of the primary investors in the Pakistani startup landscape, estimates that Pakistani startups will be worth $50bn by 2030.

“Today the number sits at $1.8bn, if we count Daraz and FoodPanda, which people should, then we’re sitting at $3bn to $4bn. We’re looking at an easy 10 times growth here,” says Aftab. Daraz, an e-commerce platform, was founded in Pakistan and now offers its services in several countries, and Foodpanda is an international food and grocery delivery business.

“It’s profound what is happening,” says Aftab, referring to the many first-time investors that have mushroomed in the country to pour money into these startups in hopes of handsome returns down the line. Many of these startups straddle parts of the informal economy and will help bring that under the formal economy and the tax net for the first time, he adds. 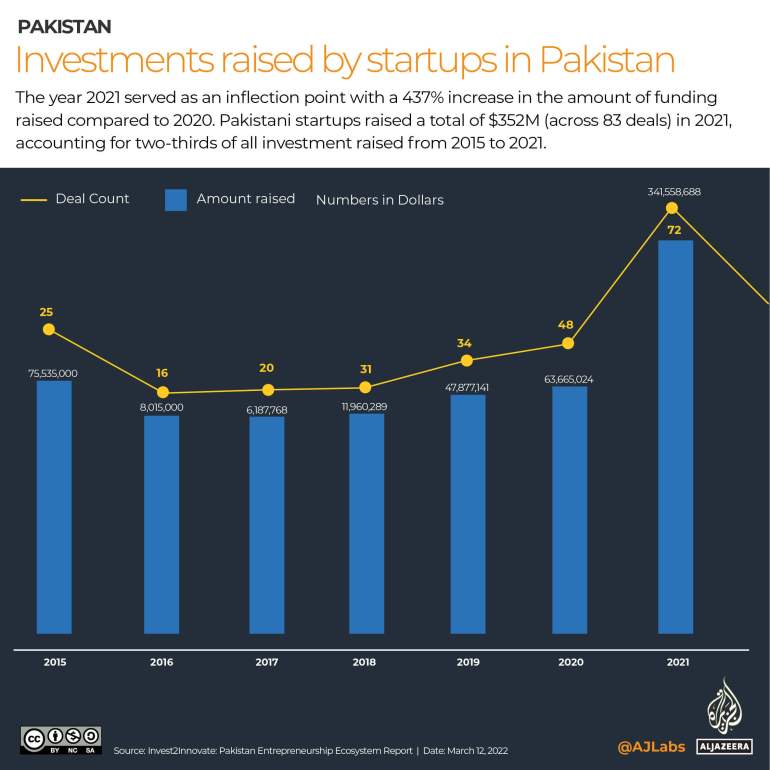 Invest2Innovate’s Pakistan Startup Ecosystem Report 2021 highlights the need for more attention directed towards startups to create a supportive ecosystem in which businesses can flourish.

Opportunities for growth, however, come with the challenge of finding the right human and capital resources to allow the building of infrastructure that can absorb the two million new people entering the workforce every year, the report says.

Recent reforms, including a legal framework for Electronic Money Institutions set up by the country’s central bank, the State Bank of Pakistan, have allowed new businesses to be set up and have led to an increase in investments. Another policy that led to investor cheer was the Digital Banking Policy, which was finalised in January and allows digital banks to not just be e-wallets, but also provide credit, investments, and other products.

The Securities and Exchange Commission of Pakistan, which oversees non-banking companies, has established legal definitions for startups, and the federal government has helped set up Special Technology Zones. 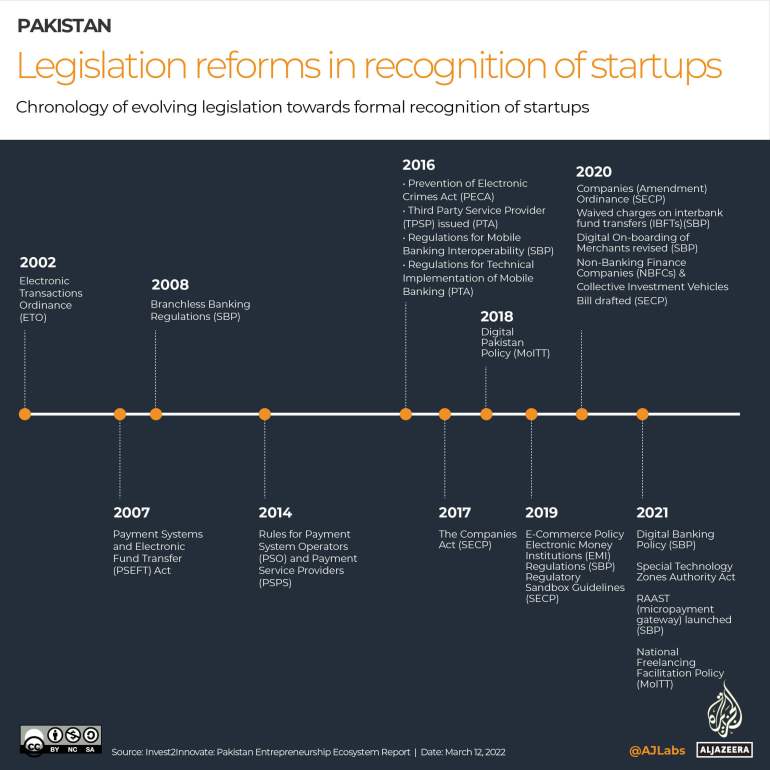 Danish Lakhani, founder of NayaPay, a digital wallet still in its testing phase, has been approved to be launched to the mass market by the State Bank of Pakistan after a nine-month pilot and inspection. NayaPay raised $13m in February from primarily local and foreign investors and is the largest funding for fintech in Pakistan.

“As an early electronic money institution, we worked closely with various departments at the State Bank during the evolution of the EMI-licensing process,” Lakhani told Al Jazeera.

While the huge injection of money into Pakistan’s struggling economy bodes well for the startup scene, it still faces challenges such as lack of local investors, limited skilled workers, and the gender gap in founders and workers.

According to the i2i investment tracker, angel investors – high net worth individuals who financially back a business usually in return for a share – invested $32m across 14 deals at the pre-seed stage, and $123m across 46 deals at seed stages. The pre-seed stage is when an idea needs enough equity to kick-start operations for an early version of the product. The seed stage is when the company needs to raise funds with an angel investor or institution formally.

However, funding for later stages is an issue that needs to be addressed if companies want to scale and enter new markets. The majority of the early-stage investments are from outside Pakistan. There were 11 local angel investors in 2021 who co-invested in six deals that totalled $6.9m. 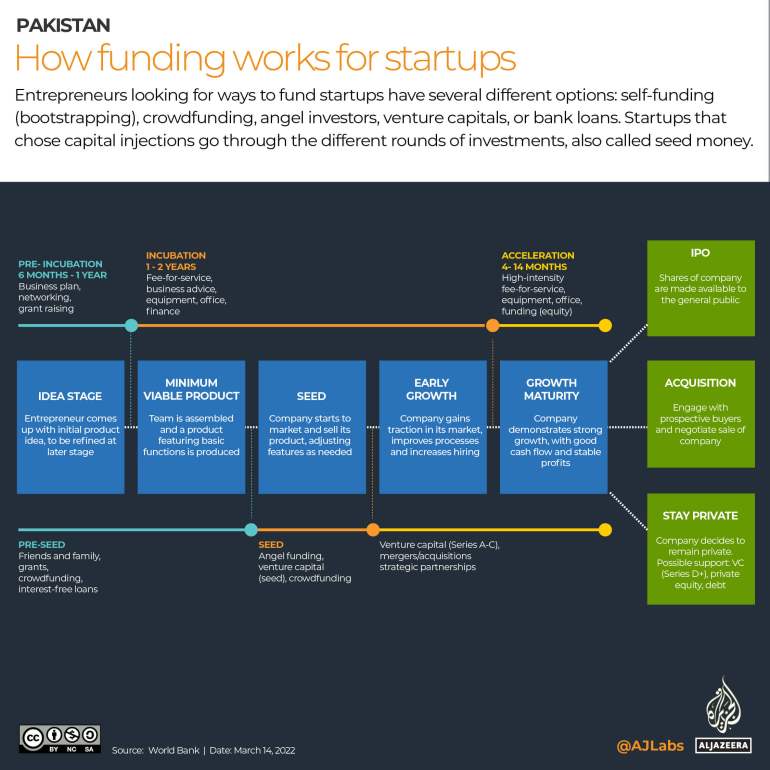 While there has been progress by regulatory authorities for startups, there is still a lack of legal framework for foreign companies wanting to buy shares in Pakistani firms.

The government has allowed holding shares for startups to be outside Pakistan, thus helping to push foreign investments. Zayn Capital’s Aftab says companies feel more comfortable knowing they can keep their shares outside of Pakistan because of the lack of faith in its judiciary and legal frameworks.

Furthermore, there is a lack of clarity on taxation laws for venture capitalists, and those wanting to sell their stakes in these startups.

William Bao Bean, a general partner at SOSV – a global venture capital fund with a portfolio of more than a thousand companies and $1.2bn in assets under management – and managing director of Chinaccelerator, is an investor in many startups in Pakistan. He says the regulatory environment, the currency, and the economy does not really matter to him. His company is focusing on the mid to lower-income market in Pakistan and wants to provide services that change lives, he says.

“When you have technology coming in and making a fundamental change to how people live, as they can communicate, they can be entertained, they can have their first love, they can buy insurance for the first time, they can buy their first pair of Nike’s….. people will gravitate towards [those] life-changing services. And there’s not a whole lot you can do to stop it,” he told Al Jazeera.

Lack of local investors and scalability

There are not enough skilled staff for senior positions or a trained workforce to meet the needs of the various startups. The availability of quality technical staff, such as software engineers and data scientists, is limited.

According to the United Nations Conference on Trade and Development’s (UNCTAD) Technology and Innovation Report, out of 158 countries, Pakistan ranks 146 in terms of technology and development. Often, competitive startups have the same pool of workers and managers circulating within the same industry.

Universities are not equipped with curriculums that can be beneficial to new businesses or enable students to create their own. As a result, with the limited pool of trained workers, companies end up offering raises to hold on to trained employees. In addition, with foreign funding, salaries are further bumped up, adding to pressure on smaller firms to be able to pay competitive wages to get the right talent.

Despite the preference given to foreign graduates by investors, senior managers find local graduates have more of a connection with the local market.

“There is a clear preference of wanting to hire international graduates because of how they understand the technology and a foreign degree is a brand,” says a female manager at an e-commerce website who declined to be named for reasons of job security. She’s been working in the startup landscape since 2016 and believes there is a significant difference in the workforce within Pakistan as well, not just with international graduates. Local university graduates between Karachi and Lahore are vastly different in terms of their efficiency, understanding of technology, and willingness to learn.

However, she adds, as a manager in a hiring position, she sees that international graduates create an uneven environment. The socioeconomic class differences in a workplace create an unspoken boundary, which is further amplified by the educational institutions people come from. 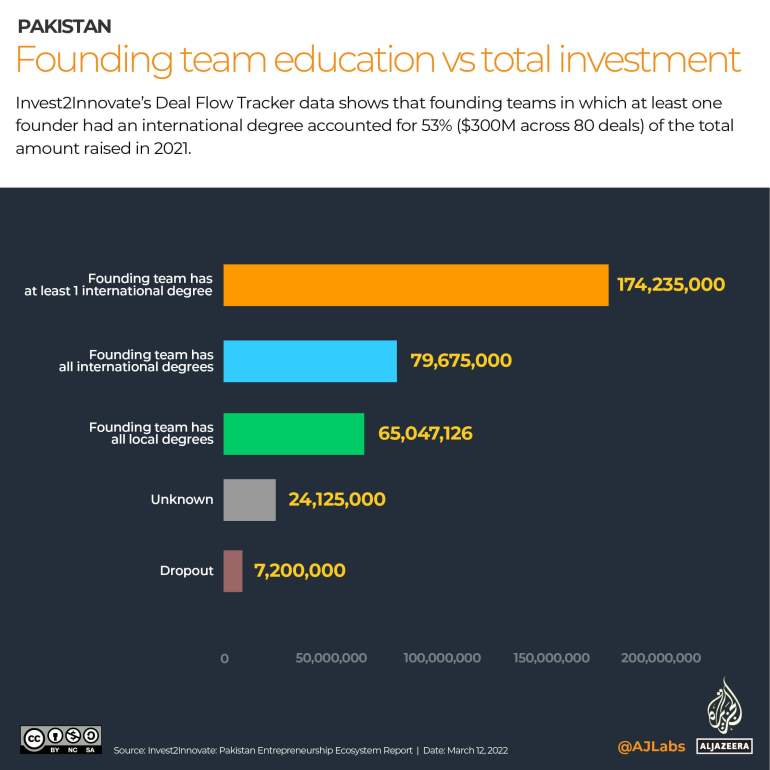 The gender gap in Pakistan is one of the worst in the world, ranking in the bottom three, at 153 out of 156 countries, according to the Global Gender Gap Report.

Female participation is vastly unaccounted for as most of them are unskilled, or unpaid, labour. As for women who are in the formal workforce, their options for growth are limited often because their families aren’t comfortable with them traveling out of the house or to far places or because they have to prioritise taking care of family members and that often means dropping out of the workforce or not taking up roles that require longer hours at work.

However, there is progress as far as women being connected to the internet is concerned. Entrepreneurship has allowed women in urban centres to progress to becoming business owners. 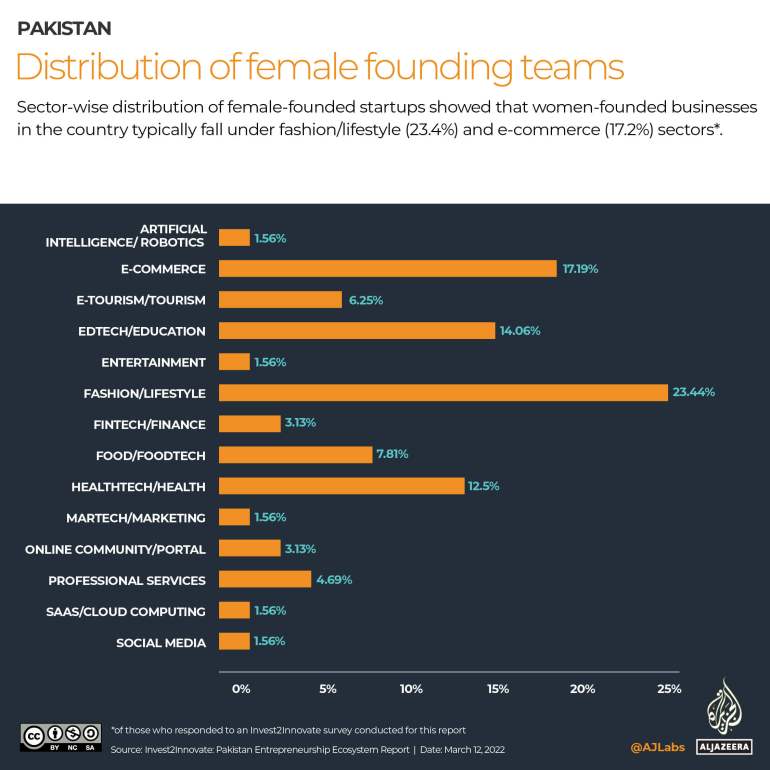 According to Invest2Innovate’s report, gender disparities are prevalent in the startup ecosystem and prevent women-led startups from achieving their full potential. Only 1.4 percent of all investments raised within the past seven years in Pakistan were by solely women-run startups.

Oraan, a fintech startup to help women save money, raised $4m last year, making it the most funded female-led startup. Halima Iqbal, co-founder and chief executive of Oraan says it was difficult to secure funding, but they were glad to have the backers who believe in the problem they are solving.

“A very tiny portion of VC funds in the world go to women-led companies and there is a relatability factor that plays a role in funding,” as most of the investors are male.

The female manager mentioned above says in all the years she has worked in startups, there have been very few women in senior positions, with the majority of women limited to human resources or junior executive staff.

“As a senior manager now, I’m often alone in a boardroom with men and despite my confidence, I feel intimidated. I’m also often made to feel that I’m being talked at,” she told Al Jazeera.

NayaPay’s Lakhani says one of the core values at his firm is gender neutrality. “[We have] flexible working options, on-site childcare facilities, training, and growth opportunities are readily available for all our team members. We are partnering with organizations such as CodeGirls which encourage and train women interested in technology roles.”

Despite the progress some companies are making, on-site child care facilities and flexible hours are not the norm yet. Women are still widely left out of the investment networks and mentorship. Support programs need to be bespoke designed for female-founded startups, including legal and financial services, networking development, and access to mobility, stated the insights report.

Shane Shin, of Shorooq Partners, an investment company based in the UAE, says startups in Pakistan are exciting because if they can be scaled to enter Saudi Arabia and Egypt, that’s where companies become worth several billion dollars.

“Pakistan is at the juncture of accepting global capital from the US and Asia, and this is a very rare phenomenon,” says Shin.