A surge in oil sent shivers through risky assets Tuesday, reversing an early recovery in American stocks and sending some European markets down 4%. Bonds rallied amid concern about the impact of war on global economies, with 10-year U.S. yields posting their worst four-day drop since December.

In the final moments of trading, the S&P 500 sank more than 2% as Apple Inc. said it has halted product sales in Russia. The equity gauge rebounded from session lows, while closing down for a second straight day. Crude traded near $105 a barrel, raising fears about potentially higher inflation that could complicate the Federal Reserve’s job at a time when Russia’s invasion of Ukraine is seen as a threat to global growth. Bonds climbed, with swaps linked to the Fed’s March 16 meeting dwindling to 22 basis points of tightening. That suggests traders don’t even expect a full quarter-point hike — a contrast from last month, when a half-point move was all but fully priced.

“Investors struggle to go long risk as the Russia-Ukraine crisis intensifies and as surging oil prices threaten economic growth prospects,” said Edward Moya, senior market analyst at Oanda. “Stagflation risks have never been greater, and that should continue to fuel the many commodity super cycles that are running hot.”

Commodity prices soared the most since 2009 as Russia’s invasion of Ukraine threatens key supplies of energy, crops and metals that were already tight as major economies emerged from the pandemic. President Joe Biden is being pressured by lawmakers in both parties to cut off U.S. imports of Russian oil and gas. Such a move would likely send gasoline prices surging, adding to inflation pressures.

Biden will deliver his State of the Union speech at 9 p.m. in Washington. Not since 2003, when George W. Bush laid out his case for war against Iraq, or 2010, when Barack Obama was confronting the financial crisis, has a U.S. leader delivered his annual address to Congress in such a fraught moment.

Meantime, Fed Chair Jerome Powell will try to reassure lawmakers this week that the central bank will act to curb the hottest inflation in four decades while remaining flexible in the face of geopolitical uncertainties. He’s set to testify in a semiannual monetary-policy testimony to House and Senate panels starting Wednesday. 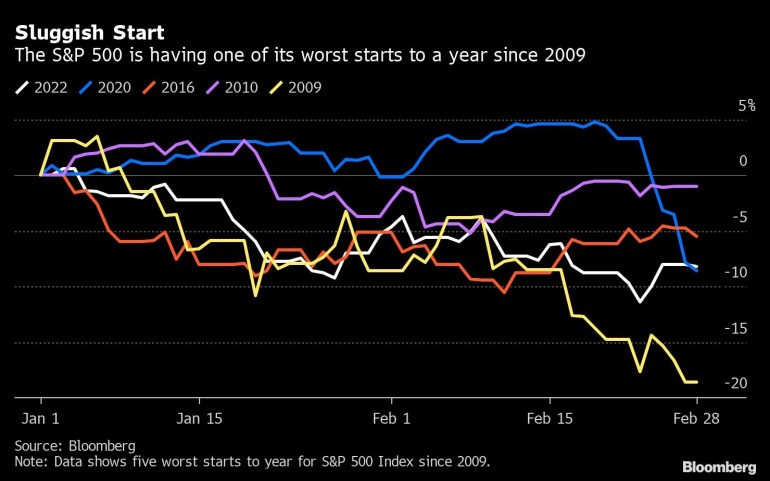 Russia said it would press forward with its invasion of Ukraine as the war enters a more brutal stage. European Union ambassadors agreed to exclude seven Russian banks from the SWIFT financial-messaging system, but spared the nation’s biggest lender Sberbank and a bank part-owned by Russian gas giant Gazprom.

U.S. equities are off to another rocky start this year as prospects for higher interest rates and Russia’s invasion of Ukraine combine to put the “stocks-only-go-up” mantra to the test. The S&P 500 saw back-to-back monthly declines for the first time in almost a year and a half. One ray of hope for investors: Each of the last four times the gauge closed lower through February, it finished the year higher by at least 9.5%.