Oil closed below $90 a barrel for a second day as the possibility that a nuclear deal with Iran could bring relief to a tight market overshadowed a big drop in U.S. crude stockpiles.

Futures in New York ended Wednesday’s session just 0.3% higher, paring earlier gains, as a flurry of diplomacy in Vienna has spurred renewed optimism of a breakthrough in the nuclear talks. In the morning, prices had risen as much as 1.4% after a government report showed U.S. crude inventories fell to the lowest level since 2018 amid record demand. 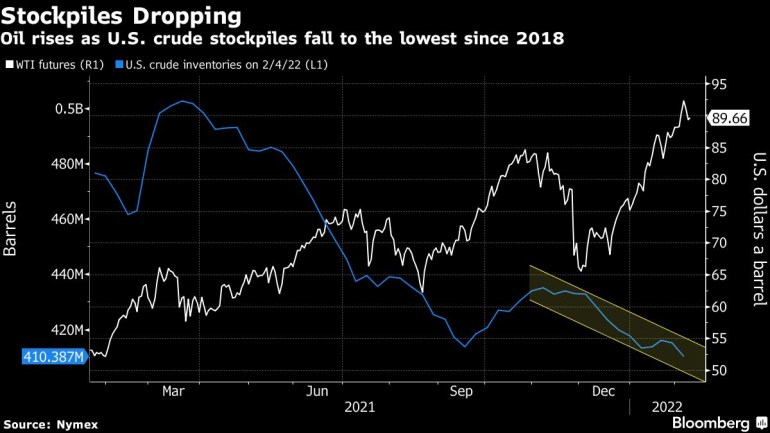 Oil’s rally had paused this week after a run of seven weekly gains propelled prices to the highest since 2014. The possibility of more Iranian oil comes as global supply has increasingly been unable to keep up with surging demand from economies emerging from the pandemic. OPEC+ is struggling to meet its pledged output increases, in part due to outages in Libya, while traders are looking to see how much the U.S. shale patch will lift output this year. Meanwhile, France’s President Emmanuel Macron suggested the political tension around Ukraine could ease.

Combined U.S. supplies of refined products and crude oil haven’t been this low since 2015, with inventories draining steadily since the summer of 2020 as demand has rebounded from the depths of the pandemic-induced lockdowns. Crude futures, as well as other commodities, are in backwardation, a structure indicating traders are paying a premium for closer-dated deliveries, as inventories continue to tighten.

Meanwhile in Washington, White House Economic Adviser Jared Bernstein said in an interview on CNN that releasing more crude reserves is an “option that can be put on the table as needed” to help tackle gasoline prices. That tactic, however, has had little impact so far, with motor fuel rising to the highest in more than seven years.