By Sherry Su and Alex LongleyBloomberg

Russia’s flagship crude traded at one of the deepest discounts in years as traders fret about how the crisis over Ukraine will play out.

Trafigura Group and the trading arm of Lukoil PJSC both offered Urals, the nation’s largest export grade, at $6.30 a barrel below the regional Dated Brent benchmark. That’s the deepest discount in at least 11 years, according to data compiled by Bloomberg. Surgutneftgas PJSC earlier sold the same crude for delivery to Europe at $6 a barrel lower than the same marker. 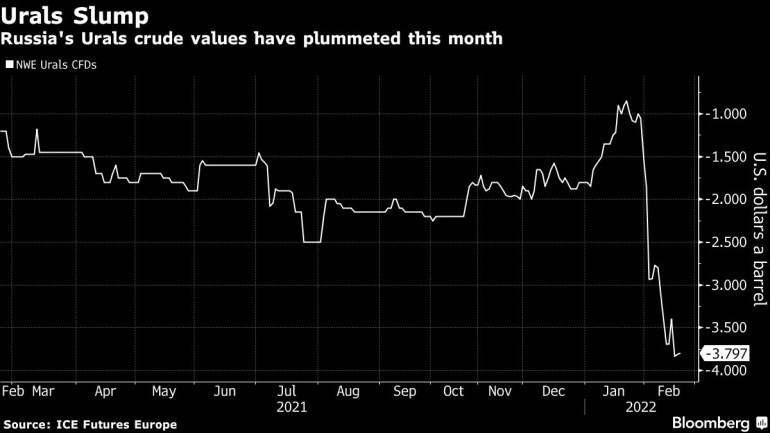 They’re the latest examples of how sharply the relative value of Russian oil delivered into Europe has slumped over the past few weeks. Traders have been warily watching to see what — if any — major measures the U.S. and its allies take to disrupt the flow of Russia’s oil exports.

“Russia-U.S. tensions over Ukraine have contributed to the collapse in Urals differentials,” consultant Facts Global Energy wrote in a note. “It seems that after many European refiners went on a Urals buying spree in December/January, those that have a choice are now shying away from Urals.”

The weakness in the Russian crude runs counter to much of the rest of the physical market, which is pointing to extreme levels of strength.

In addition to the tensions, Urals prices face a series of market-related headwinds. The grade loads with a shorter lead time then many competing barrels, which coupled with high near-term prices, has been driving some of the discounting. Urals is also relatively energy intensive to process, again making it less appealing to refiners whose hydrogen costs have jumped because of soaring natural gas prices.

In the U.S., there already have been indications that companies have sought alternatives to Russian oil, while Asian traders were said to be wary of becoming caught up in possible trade sanctions against Russia earlier this month.

The price of Urals is also dependent on supply. Russia is poised to boost Urals shipments from its western ports to the highest in 23 months in March.

At the same time, four large European oil traders — including three buyers — said Tuesday that the country’s crude exports should continue largely unabated because of how tight the market is, and how reliant Europe is on Russian supply.