Oil jumped as tensions mounted between Russia and the West over Ukraine, adding to bullish sentiment as leading market participants said they expect global demand to continue its powerful recovery from the pandemic.

West Texas Intermediate traded near $94 a barrel and Brent climbed near $96 as the Kremlin announced Russian President Vladimir Putin plans to officially recognize separatists in eastern Ukraine, a move that could undermine European-mediated peace talks and further escalate tensions with the West. The Kremlin has repeatedly denied it intends to attack Ukraine.

“The concern is that if tension in Eastern Europe escalates further that some of this supply might get disrupted intentionally or driven by political divisions,” affecting not only energy but other commodities, said Giovanni Staunovo, a commodity analyst at UBS Group AG. “I would expect the market to continue to react in a sensitive way.”

Oil got a boost Monday after Saudi Aramco said it sees signs that demand is rising, especially in Asia. And the chief executive officer of Vitol Group, the world’s biggest independent oil trader, said in a Bloomberg Television interview that prices could surpass $100 a barrel for a sustained period. 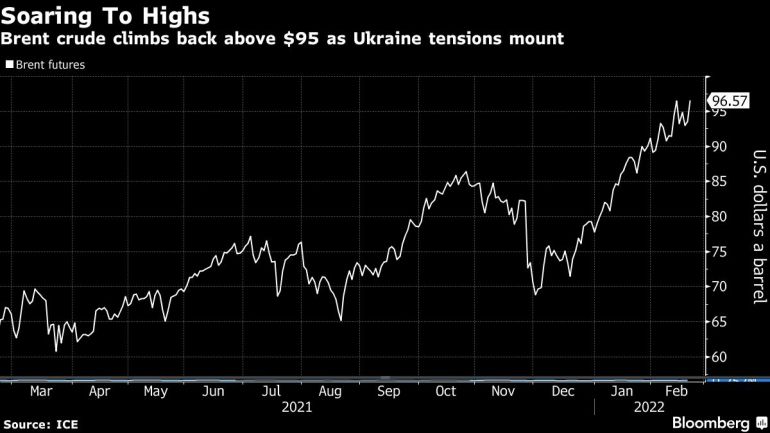 The U.S. told allies that any Russian invasion would potentially see it target cities beyond the capital, Kyiv. Moscow, which has repeatedly denied it plans an invasion, said over the weekend that its forces would remain in Belarus indefinitely.

Adding to oil’s gains, several of OPEC+’s biggest oil producers want the group to continue with its strategy and add another 400,000 barrels a day of crude to the market in April, according to people familiar with the matter. That comes despite calls for OPEC+ to increase output faster amid tight supplies.

“Demand is going to surge in the second half” and exceed 100 million barrels a day if travel continues to return to normal, Vitol Group CEO Russell Hardy told Bloomberg television. “Eventually we’re going to run out of spare capacity.”

Trading volumes were below normal levels on Monday as several market participants were away due to the Presidents’ Day holiday in the U.S.

Oil investors are also following negotiations to rekindle Iran’s 2015 nuclear agreement, which has made some progress, Iran’s Foreign Ministry Spokesman Saeed Khatibzadeh said in a press conference. The remaining issues are the hardest ones, though, he added.

In a signal of the crude market’s bullishness, nearby contracts for WTI and Brent are commanding significant premiums over those further out, indicating that traders are clamoring for barrels right now. In Asia, refiners are seeking to ramp up their run rates to benefit from healthy margins.