Stocks dropped, while bonds climbed at the end of a jittery week marked by tension between the West and Russia as well as worries about the Federal Reserve’s next policy steps.

Equity swings intensified ahead of the close, with Friday’s $2.2 trillion options expiration exacerbating moves. The S&P 500 briefly turned positive before resuming its decline, with technology, energy and industrial shares dragging down the gauge. Traders also took risk off the table ahead of a U.S. holiday on Monday. The Nasdaq Composite tumbled into a “death cross,” a technical pattern that has at times presaged further weakness. Treasury 10-year yields approached 1.9%, while oil pared losses after sinking as much as 3% earlier in the day. Bitcoin traded near its $40,000 key psychological level.

The U.S. said Russia has massed as many as 190,000 personnel in and around Ukraine, calling it the most-significant military mobilization since World War II. Russia told the U.S. this week it has no plans to attack. Citing escalations in the breakaway Donbas region of Ukraine, Russian President Vladimir Putin called on Kyiv to “sit down at the negotiating table” with separatist leaders “and agree on political, military, economic and humanitarian measures to end the conflict.” The government in Kyiv refuses to negotiate with the Russia-backed separatists.

One of the Fed’s most-dovish officials called for a “substantial” policy shift — while playing down the need for aggressive tightening — as a second pushed back against a half-point hike next month. The remarks on Friday from Chicago Fed President Charles Evans and his New York counterpart John Williams implicitly reinforced the message that the U.S. central bank will raise rates by a quarter point at its March meeting, even as core officials remain open-minded about how high they will ultimately need to go.

“Fear can be a good development for markets,” wrote Callie Cox, U.S. investment analyst at eToro. “When investors get nervous, they tend to add more cash and hedge their positions. The worst market storms typically happen when investors least expect it. Right now, we’re hedged and ready for a big punch to the stomach, but it may not hurt as badly as we think. It’s a good recipe for a relief rally when headlines calm down.”

“The situation remains fluid and we believe markets will remain subject to bouts of risk-on, risk-off in the coming days,” wrote Win Thin, global head of currency strategy at Brown Brothers Harriman.

“While there have been some reports of de-escalation in tensions, nothing has changed fundamentally to prevent investors from remaining fearful about a possible Russian invasion,” wrote Fawad Razaqzada, an analyst with ThinkMarkets. “Beyond this, investor sentiment is likely to remain downbeat anyway given concerns about surging inflationary pressures around the world and policy tightening from the Fed.” 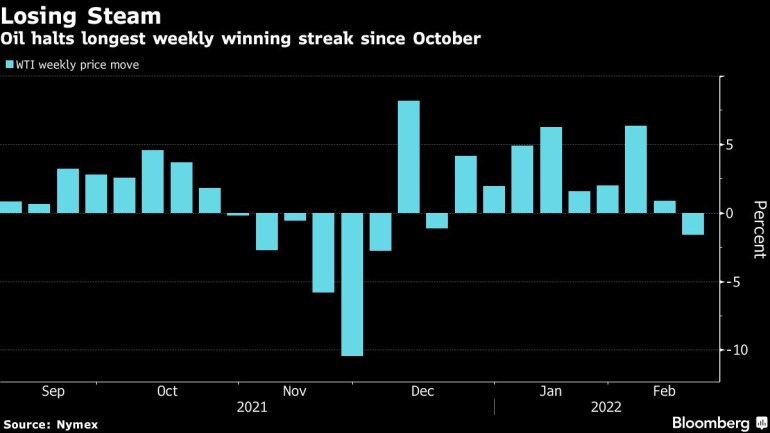 After their worst start to a year in decades, Treasuries are reasserting their haven status and eclipsing the appeal of riskier assets — a troubling combination for Bank of America Corp. strategists. U.S. sovereign debt attracted $7.4 billion in inflows, the most since the coronavirus pandemic first struck, according to a BofA note citing EPFR Global data for the week through Wednesday.