By Craig Torres and Steve MatthewsBloomberg

Federal Reserve officials concluded at their January meeting that inflation was running too high, warranting a hike in the benchmark interest rate soon and potentially justifying a faster pace of tightening.

“Most participants noted that, if inflation does not move down as they expect, it would be appropriate for the committee to remove policy accommodation at a faster pace than they currently anticipate,” according to minutes of the Jan. 25-26 Federal Open Market Committee meeting released Wednesday.

Surging inflation has spurred some U.S. central bankers to revise up their outlook for rate increases this year, while both Democrats and Republicans are urging the Fed to get price pressures under control. President Joe Biden’s approval ratings have fallen recently as Americans feel the squeeze at the grocery store and gas pump, and the price pressures are making it that much more difficult for his administration to pass another stimulus package.

A move at the FOMC’s next meeting on March 15-16 is fully priced into markets and there’s been some betting that officials could increase rates by as much as 50 basis points. Investors see at least 150 basis points of tightening in 2022, up from 75 basis points just a few weeks ago, as the evidence continues to show a hot economy that’s experiencing the highest inflation in 40 years. 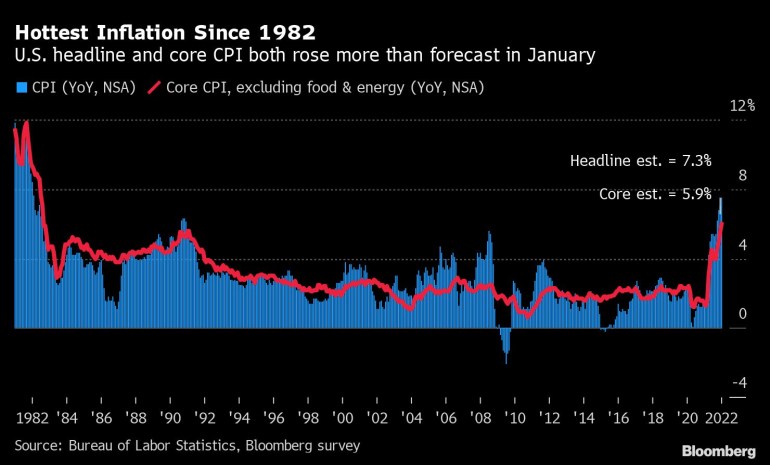 Government data since policy makers met a few weeks ago has reinforced that message, with consumer price growth accelerating to a four-decade high of 7.5% in January. In the labor market, the U.S. added almost half a million new jobs last month despite record Covid-19 cases, and wages surged.

Investors took the minutes as slightly more dovish than expected. The S&P 500 was little changed, while two-year Treasury yields — which are more sensitive to imminent Fed moves — fell with the dollar.

“With no explicit discussion of a date to begin balance sheet runoff, or of the idea of a 50 basis point hike in March, the minutes are on the less-hawkish side of expectations,” said Ian Shepherdson, chief economist at Pantheon Macroeconomics. “But they aren’t the last word on anything,” given the worse-than-expected inflation and wages data released since the meeting.

Fed officials, responding to hot inflation, have sped up the taper of their asset purchases and are on track to conclude the program by the middle of next month. During the meeting, the FOMC discussed balance sheet runoff plans and that debate was reflected in the minutes.

“A number of participants commented that conditions would likely warrant beginning to reduce the size of the balance sheet sometime later this year,” the minutes said.

In a statement released at its January meeting, the Fed said it expects the process of balance-sheet reduction will commence after it has begun raising rates. It also spelled out a plan to “significantly” shrink the balance sheet over time, while in the longer run holding mainly Treasury securities, implying a desire to shed most of the $2.7 trillion of mortgage-backed securities that it also currently owns.

Chair Jerome Powell told reporters after the January meeting that officials had not made any decisions on the timing or pace of balance-sheet reduction.

The minutes confirmed that officials didn’t get into the details of the pace of rate hikes or the mechanics of balance sheet runoff, which have been keen topics of interest in recent weeks. However, hot readings on the economy since the meeting have boosted expectations that Powell will provide more details next month, when officials will also have February inflation and employment reports in hand.

Powell also told reporters in January that U.S. labor market conditions were consistent with maximum employment. In the minutes, the Fed flagged, among other risks, “persistent real wage growth in excess of productivity growth that could trigger inflationary wage–price dynamics.”

It also noted “the possibility that longer-term inflation expectations could become unanchored,” though a blog post from the New York Fed’s Liberty Street Economics series earlier this week said that U.S. consumers don’t expect red-hot inflation levels to last over the next few years.