Stocks faced another session of wild swings as traders assessed the latest geopolitical developments amid worries about a Federal Reserve policy mistake.

After a few rebound attempts, the S&P 500 notched its third straight drop. The gauge still closed off its session lows, while the tech-heavy Nasdaq 100 finished higher. Treasury yields climbed — with shorter maturities leading the increase. The move kicked in a resumption of curve flattening, with the gap between two- and 10-year rates narrowing. West Texas Intermediate crude topped $95 a barrel for the first time since 2014.

Ukrainian President Volodymyr Zelenskiy briefly spooked markets with what his office later said was meant to be a sarcastic comment about the rest of the world predicting a date for an attack by Russia. Zelenskiy said it should be a day of unity instead. Vladimir Putin’s top diplomat, meanwhile, urged the Russian president to continue talks with the West, with negotiation options “far from exhausted.”

“If an armed conflict between Russia and Ukraine is somehow avoided, a short-lived relief rally is likely, but there are still too many worries on the horizon for any type of longer lasting upward move higher in stocks,” said George Ball, chairman of Sanders Morris Harris in Houston. “It is time for investors to raise cash. Cash is the ultimate king when markets are volatile.”

Investors have been on edge, with bets on the pace of rate hikes since the January Fed meeting shifting to six or seven this year — versus the three that officials forecast in December. JPMorgan Chase & Co. strategists led by Marko Kolanovic said global markets are pricing in an aggressive wave of monetary tightening this year that’s unlikely to materialize in full — reinforcing the allure of stocks tied to the economic cycle. 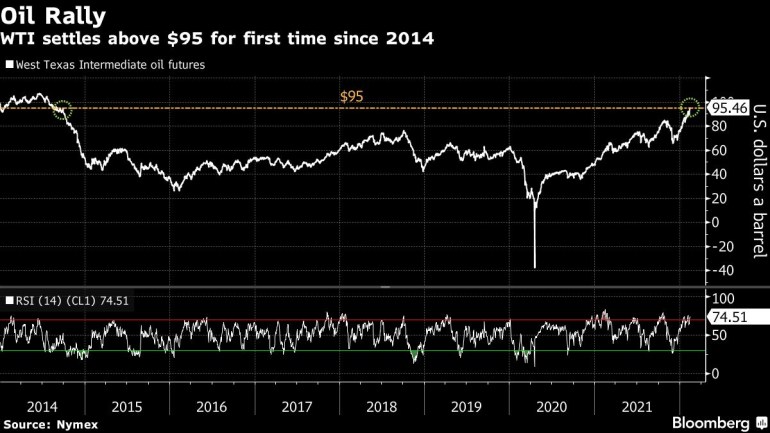 Meantime, Fed Bank of St. Louis President James Bullard said Monday that the central bank needs to move forward the plans to raise rates to underline its inflation-fighting credibility. “I do think we need to front-load more of our planned removal of accommodation than we would have previously,” he told CNBC.

It’s “hard to see a happy ending” for bonds in a scenario of rising interest rates, Oksana Aronov, a strategist at JPMorgan Asset Management, told Bloomberg Television. “We are in somewhat of a hot mess. We’re in the middle of the Fed’s last policy mistake and concerned about their next policy mistake. Right now, caution is the name of the game.”