A call these days to Delta Airlines customer service number – once the fraught journey through the automated “Dial one for this, Dial two for that” menu has been successfully navigated – produces one final robotic announcement before the call is put on hold.

“We are experiencing unusually high call volumes right now. Your estimated wait to speak to a customer service professional is …”.

What’s happening at Delta is happening at most major corporations in the United States these days, and it has nothing to do with “high call volumes”. The fact is, like restaurants, retail stores, public schools and many others, Delta’s call centre cannot find enough workers.

And it’s not just customer service. During the busy holiday period and into early January, Delta, United, Southwest and many other US carriers cancelled thousands of flights, stranding passengers and disappointing millions of grandparents hoping to see the latest addition to the family for the first time since the pandemic began in Q2 2020.

Some of this, of course, was down to the toll Omicron infections were taking on flight crews. But in spite of stronger than expected jobs creation in January, that same month only 62.2 percent of working-age Americans either had a job or were actively looking for one.  In February 2020 – right before the pandemic struck the labour force participation rate was 63.4 percent. Leaving economists to wonder – where have all the missing workers gone? 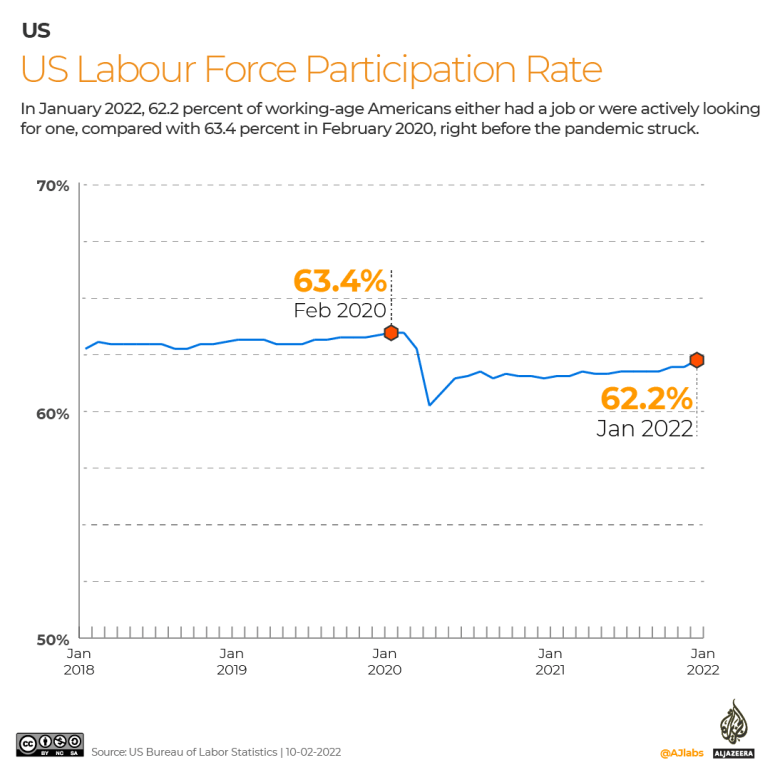 Myriad theories have sprouted up during the past year to explain the continuing shortage of US workers. Some have already been discredited.

Early in the pandemic, some doctrinaire free-market economists blamed government stimulus, and in particular, the $600 a month enhanced unemployment benefit offered to workers displaced during the most intensive stage of the pandemic, when businesses like restaurants and entertainment venues were shut down completely and unemployment spiked.

Together with an eviction moratorium, some insurance and food assistance, and child tax credit cheques for families with children, the theory was that low-wage workers had no incentive to return to jobs that would, in effect, mean a pay cut.

Republicans were quick to blame President Joe Biden for this largesse and the resulting labour shortages.

“He could reverse it right now, but he doesn’t want to,” said the number-two ranking Republican in the House, Minority Whip Steve Scalise in October. “They keep doubling down on this far-left socialist agenda.”

But a funny thing happened on the way to the Workers’ Paradise: All of these benefits expired long ago ­ – the last of them, the $250-$300 per child cheques sent out to American families in the final quarter of 2021. But the labour shortage persists, and the causes continue to be debated.

“There are a lot of different things going on here, some of them related to fear about COVID for workers who need to interact with the public, some of it is demographics as a Baby Boomers nearing retirement who have conclude they’ve figured out how to live within their means and are not going to work any more,” said Gina Sanchez, an economist and CEO of Chantico Global, an asset allocation firm based in California.

“And then you have a segment of the population that are saying, ‘Hey, this is unreasonable. You can’t expect me to take these kinds of risks. You’re not paying me enough.’ That part of the market is actually experiencing a stepwise shift up in their salaries,” she told Al Jazeera.

And that, of course, higher wages is one of several drivers of the current wave of inflation.

“You know, if you’re faced with a labour shortage, you might consider paying them more,” said Adam Tooze, a Columbia University economist and author of the new book, Shutdown: How COVID shook the World’s Economy.

Tooze noted that the Biden administration has tried to follow Winston Churchill’s advice by never letting a good crisis go to waste. Many of Biden’s advisers “would like to use this to strategically shift the balance of what we used to call ‘class forces’ to shift the balance of power in the labour market in favour of workers as against employers,” he told Al Jazeera.

If you're faced with a labor shortage, you might consider paying them more

Beyond politics, policy and demographics, other forces are at work as well. Women, for instance, have faced particularly difficult choices as COVID-19 restrictions that shut down schools during much of 2020 and part of 2021. More often than not in a two-income household, the mother has taken the hit, trying to work from home and monitor children struggling with remote learning.

That was reflected in January’s jobs report.  The labour force participation rate for me was 67.9 percent, compared with 56.8 percent for women.

“You cannot underestimate the stress that women have been under as a result of COVID-19 restrictions,” said Terri Patterson, a former FBI agent and behavioural psychologist who now helps companies manage mental and physical threats to the workplace. “Remote work for a single mother, or even for a dual-income mother living in a small apartment, has caused a spike in mental health issues that is directly attributable to the pandemic.”

A study published early in the pandemic – July 2020 ­­– by Deloitte, a global consultancy, points out that all these effects are exacerbated among women and minorities, precisely the segment of the workforce now missing from retail and service industries.

In some cases, she noted, jobs may have evolved as employers have adapted by integrating robotics, AI or remote protocols that their older employees may or may not be able to embrace. “So, there’s some types of jobs that might not come back to the same form as they were previously,” she told Al Jazeera.

The effects of “Long COVID”, too, may be playing a role. Katie Bach, a fellow at Brookings, notes that of the more than 100 million Americans who have contracted COVID-19, 27 percent to 33 percent experience symptoms long after the initial bout of the virus, something that Bach posits may be keeping many of them on the job market sidelines.

While Sanchez and others see the impact of government largesse on the labour market as overstated, they believe the recession that precipitated the labour shortage was the result of policy measures.

COVID lockdowns and restrictions – the subject of a lot of second-guessing – are being viewed by many economists as the policy equivalent of a “war of choice”. Economic fundamentals, in other words, did not cause the COVID recessions that gripped the world in 2020 and early 2021. For better or worse, it was the policy response to the pandemic that shut down economies.

“Pandemics are very different from wars in that wars destroy labour, and they destroy capital, but pandemics only destroy labour,” said Sanchez. “And ultimately, after pandemics, it’s not that unusual to see wage growth, which we are actually seeing right now.”

She sees the current wave of pay bumps as long-lasting and mostly positive.

“Over the next decade or so, that pressure will go away as people sort of find the right wage that they feel compensates them for the jobs that they do,” she said. “But I think that wages will be forever higher. People in that sort of social reflection are saying, ‘Hey, I think I need to get paid more,’ and the labour market is basically saying to them, ‘Yes, you’re right.’”