Texas electricity prices surged to more than $1,000 a megawatt-hour for Friday when demand is forecast to hit a winter record in the biggest test since extreme cold and blackouts killed hundreds almost a year ago.

Demand on the grid operated by the Electric Reliability Council of Texas, or Ercot, is forecast to peak at 71,806 megawatts on the morning of Feb. 4, a level that has never been seen outside the summer season before. In February 2021, demand was poised to climb to an all-time high before widespread outages darkened the second-largest U.S. state for days.

Memory of that crisis is creating a fear premium for coming days, when a deep chill is expected to descend on Texas, according to several traders. On-peak power for Ercot’s North hub, which includes Dallas, closed at $800 for Feb. 4 on the Intercontinental Exchange after topping $1,000 in trading Monday, traders said. By comparison, Wednesday power fetched $60 and Thursday almost $560, a trader said. 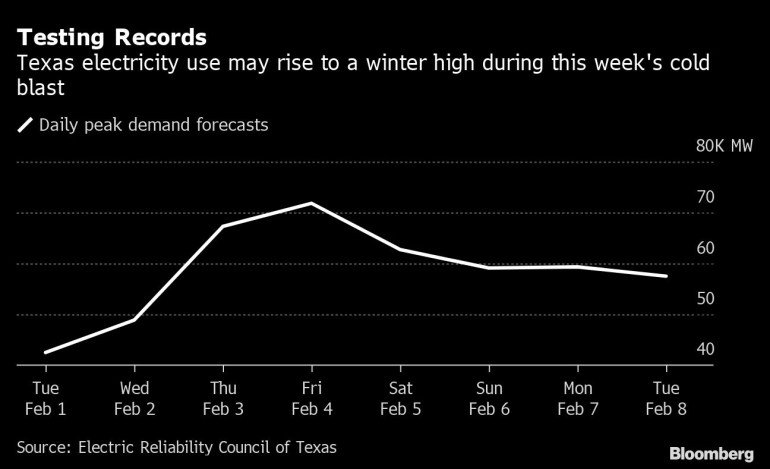 A massive storm set to sweep the central U.S. has left nearly two-thirds of Texas under winter-storm watches and weather advisories, as temperatures are set to plummet from highs in the upper 60s Fahrenheit (20 Celsius) on Tuesday to 14 degrees in Dallas Thursday night and 10 in Midland. A wide area of Texas, including Dallas and Fort Worth, are expected to get a mix of ice and snow, the National Weather Service said.

“This is the strongest cold event so far this winter, but not nearly as cold as last winter,” said Matt Rogers, president of the Commodity Weather Group.

However, the Lone Star state still faces challenges later this week such as icing on turbines and snow and sleet that could impede solar generation, Rogers said. Overall temperatures could run about 25 to 30 degrees below normal in some places, although the cold snap will only last 2 to 3 days, whereas a year ago it lingered much longer.

“Dallas should bottom out at 13 Fahrenheit, which is well below normal, but not last year’s -2 Fahrenheit,” Rogers said.