Shares of China Evergrande’s electric car unit plunged as much as 26 percent on Monday after it warned it faced an uncertain future unless it got a swift injection of cash and after it said it will not proceed with plans to issue yuan-denominated shares.

The warning by China Evergrande New Energy Vehicle Group after the market closed on Friday was the clearest sign yet that the embattled property developer’s liquidity crisis is worsening in other parts of its business.

In its statement Evergrande NEV said it has suspended paying some of its operating expenses and some suppliers have suspended work.

The cashflow difficulties mean the carmaker that once had ambitions to take on Elon Musk’s Tesla Inc in the electric-vehicles industry will now likely miss its target to start mass deliveries next year.

Shares of the electric car unit slid to as low as 1.66 Hong Kong dollars ($0.21) in early trade before paring losses to fall 2.2 percent. The company has shed more than $84bn in market cap from its peak in April when it was valued at more than Ford Motor Co.

China Evergrande’s stock rose 5 percent to steady near the decade-low they made last week, while Evergrande dollar bonds were at distressed levels. 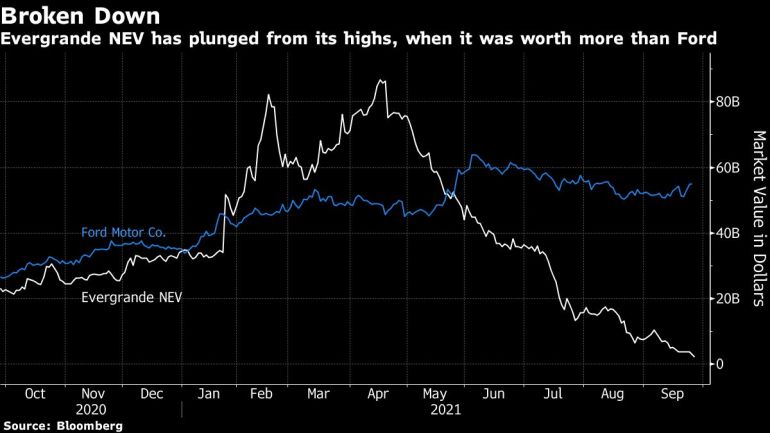 In the broader market, concerns that a collapse at Evergrande could drive a global crisis have ebbed.

“I think the markets have priced in that, on the balance of probabilities, the shock and awe is over,” said Kyle Rodda, an analyst at brokerage IG Markets in Melbourne told Reuters.

“Markets are really just expecting from here on in, a company that is doomed to failure but one which won’t be allowed to result in major risks within the Chinese financial system – or that (contagion) won’t pervade global markets.”

Evergrande missed a payment deadline on a dollar bond last week and its silence on the matter has left global investors wondering if they will have to swallow large losses when a 30-day grace period ends.

Its next major test in public debt markets will come on September 29, when it is due to make a $47.5m bond interest payment on its 9.5-percent March 2024 dollar bond.

With liabilities of about $305bn, Evergrande has run short of cash and rapidly become Beijing’s biggest corporate headache, with investors worried a collapse could pose systemic risks to China’s financial system.

The stricken developer is scrambling to raise funds to pay its many lenders and suppliers, as it teeters between a messy meltdown with far-reaching impacts, a managed collapse or the less likely prospect of a bailout by Beijing.