Financial regulators in Beijing issued a broad set of instructions to China Evergrande Group, telling the embattled developer to focus on completing unfinished properties and repaying individual investors while avoiding a near-term default on dollar bonds.

In a recent meeting with Evergrande representatives, regulators said the company should communicate proactively with bondholders to avoid a default but didn’t give more specific guidance, a person familiar with the matter said. The developer has an $83.5 million coupon due Thursday, with a 30-day grace period to make the payment.

There’s no indication that regulators offered financial support to Evergrande for the bond payment, and it’s unclear whether officials believe the company should eventually impose losses on offshore creditors. Policy makers are trying to learn more about who holds Evergrande’s bonds, the person said, asking not to be identified discussing sensitive information.

While the regulatory guidance offers few clues about what an Evergrande endgame might look like, it does suggest China’s government wants to avoid an imminent collapse of the developer that might roil financial markets and drag down economic growth. Any sign that Beijing is taking steps to give Evergrande more time to manage its debt problems could calm investor nerves in China and around the world. 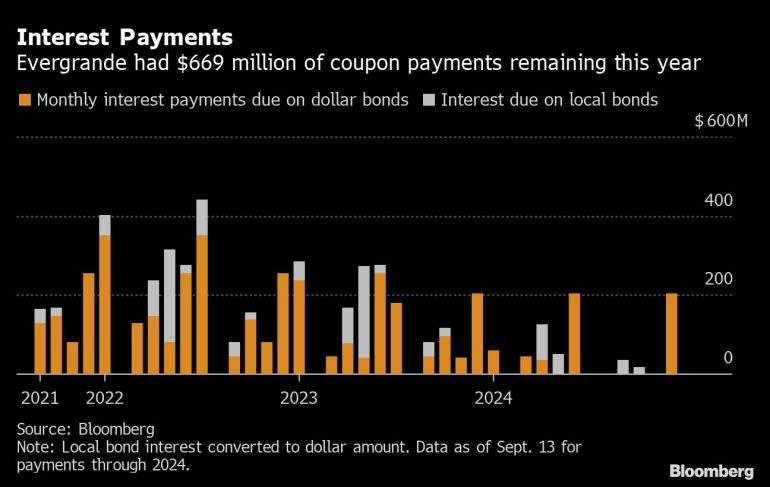 Fears of an Evergrande failure have caused a sharp rise in borrowing costs for other junk-rated Chinese developers and cast doubt on the health of some smaller Chinese banks. Individual investors, homebuyers and suppliers have staged protests at Evergrande offices across the country, while markets from Hong Kong to New York have convulsed this week as traders weighed the prospect of financial contagion from the world’s most indebted developer.

Even though Evergrande’s crisis can be traced in part to President Xi Jinping’s campaign to rein in over-leveraged property companies and discourage moral hazard, his government is unlikely to welcome a messy default that could threaten economic and social stability. Large cash injections into the financial system by the People’s Bank of China in recent days suggest policy makers are already focused on shoring up sentiment.

Evergrande, the PBOC and the nation’s financial and housing regulators didn’t immediately respond to requests for comment.

Speculation that Evergrande may avoid a worst-case scenario helped lift its bonds and stock on Thursday. The company’s 8.25% dollar note due 2022 climbed 4.8 cents on the dollar to 30 cents as of 5:39 p.m. local time, hitting session highs after Bloomberg reported regulators’ instructions to Evergrande. The bonds are still pricing in expectations of a deep haircut, but not quite as extreme as earlier this week. Shares jumped 18% in Hong Kong before the Bloomberg report, paring this year’s loss to 82%.

The rally was fueled in part by a vaguely worded statement from Evergrande on Wednesday, in which the company said an interest payment on one of its yuan-denominated bonds had been “resolved via negotiations off the clearing house.” The developer likely struck a deal with local bondholders to postpone the payment without having to label the move a default, analysts said. 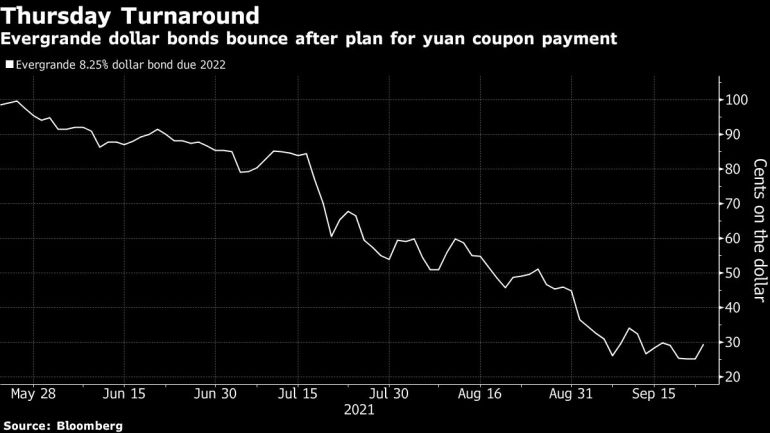 It’s unclear whether Evergrande would be able to pull off something similar for its dollar bonds. While some of the notes are likely owned by billionaire founder Hui Ka Yan and his associates, holders also include global investment firms that might be less willing to go along with opaque payment arrangements.

Deeply discounted prices for Evergrande dollar bonds suggest investors view a restructuring of some kind as all but inevitable. Offshore bondholders are widely seen as near the bottom of Beijing’s priority list of Evergrande creditors, though that assessment may depend in part on how worried authorities become about Chinese companies’ access to dollar funding. The turmoil at Evergrande, Asia’s biggest issuer of junk bonds, has sent yields on an index of junk-grade Chinese dollar bonds to a decade high.

In a meeting with Evergrande employees on Wednesday, Hui emphasized the importance of resuming construction on unfinished properties, according to Jiemian, a Chinese media outlet. He also said Evergrande will ensure repayment of investment products.

Property sales are a key source of cash for Evergrande, though the company has struggled to attract buyers in recent months amid waning confidence in its ability to deliver on projects. Homebuyers in China often have to make large down payments on properties that may take years to complete. About 1.5 million buyers are currently waiting for Evergrande to deliver unfinished homes.

The company is also trying to offload assets to raise cash, with mixed success. It said earlier this month it hadn’t made material progress on plans to sell stakes in its electric-car and property services units. Evergrande has hired Houlihan Lokey and Admiralty Harbour Capital to “explore all feasible solutions” to ease its liquidity problems.

While the developer doesn’t have any bonds maturing until 2022, it faces about $669 million in coupon payments this year. The bulk of its $300 billion-plus in total liabilities are to homebuyers, suppliers and local financial institutions.