One of the biggest questions hanging over the United States economy right now is when the Federal Reserve will start reining in its cheap money policies.

On Wednesday, the Fed prepared the ground to possibly start dialing back some of the extraordinary support it has given the economy during the coronavirus pandemic.

The US central bank ended its two-day policy meeting on Wednesday by leaving its benchmark interest rate unchanged. No big surprise there. The Fed slashed rates to near zero in March 2020 when the pandemic first struck the US economy.

What was in question going into the meeting, though, was whether the Fed would signal that it’s ready to start tapering its bond-buying purchases, which have been humming along to the tune of $120bn a month since June of last year.

The Fed said in December it would not start withdrawing that bond-buying support for the economy until it sees “substantial further progress” towards its maximum employment and inflation goals.

“Since then, the economy has made progress toward these goals,” the Fed said in its post-meeting statement on Wednesday. “If progress continues broadly as expected, the Committee judges that a moderation in the pace of asset purchases may soon be warranted.”

Fed Chair Jerome Powell expanded on that statement during his post-meeting press conference, telling reporters: “While no decisions were made, participants generally view that so long as the recovery remains on track a gradual tapering process that concludes around the middle of next year is likely to be appropriate.”

The Fed also released its quarterly projections at the end of its policy-setting meeting.

The so-called “dot plot” shows policymakers are evenly divided over where they think the federal funds rate will head next year. Half of the 18 members are now calling for the benchmark interest rate to stay put in 2022 and half of them see liftoff by the end of 2022. In June, only 7 members were calling a rate hike by the end of next year.

Policymakers lowered their median forecast for economic growth this year to 5.9 percent but upped it to 3.8 percent for 2022. In June, they were calling for 7 percent economic growth for this year, but only 3.3 percent next year.

The nation’s jobless rate was 5.2 percent in August.

“That’s, I think, a reflection of the fact that the bottlenecks and shortages that we’re seeing in the economy have really not begun to abate in a meaningful way yet,” said Powell. “So those seem to be going to be with us, at least for a few more months, and perhaps in the next year.”

The Fed doesn’t see inflation falling to 2.1 percent until 2024.

Inflation and the jobs market

In August, the US economy added a disappointing 235,000 jobs – marking the slowest pace of jobs creation since January. The slowdown was primarily blamed on a surge in COVID-19 infections linked to the Delta variant of the coronavirus.

It also happened against a backdrop of record job openings in the US. On the last day of July, some 10.9 million jobs were going begging in the US.

The Fed’s target inflation rate is 2 percent. That goal has proved elusive this year because prices have been climbing as businesses ramp up operations, triggering bottlenecks for labour and raw materials, and raising shipping costs.

Some observers have feared that prices could start to spiral out of control, forcing the Fed to raise interest rates and possibly derail the nation’s economic recovery.

But Powell has been adamant that he and his fellow policymakers believe this period of higher inflation will prove transitory and eventually prices will moderate.

That position was reiterated in the Fed’s post-meeting statement on Wednesday, which noted that “inflation is elevated, largely reflecting transitory factors”.

In July, the Fed’s preferred inflation gauge – the Personal Consumption Expenditures Index – slowed to 0.4 percent from a 0.5 percent rise the month before. 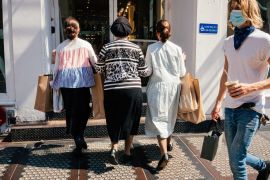 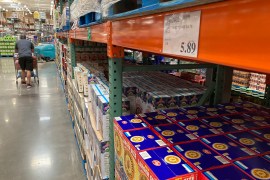 Inflation watch: US producer prices surge to another record 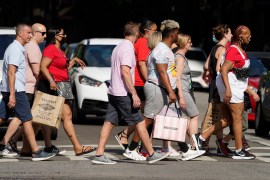 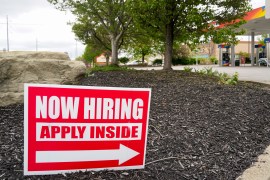 A record number of jobs are going begging in the US. What gives?

The US had a record 10.9 million job openings on the last day of July, the Bureau of Labor Statistics said on Wednesday.