Americans kept spending last month, sending retail sales unexpectedly higher — but initial claims for jobless benefits also ticked up last week, sparking questions about what impact the highly contagious Delta variant of the coronavirus is having and could continue to have on the United States’ economic recovery.

Latest data from the US Department of Commerce and the Labor Department paint a nuanced picture of a country that is experiencing a surge in COVID-19 infections in some regions.

So what’s happening with the world’s largest economy? Here’s a snapshot of what you need to know.

Start with today’s data. What does it show?

Americans are spending money, but they’re not necessarily going back to work.

Commerce Department data shows retail sales climbed a seasonally adjusted 0.7 percent in August even as many economists predicted a decline. 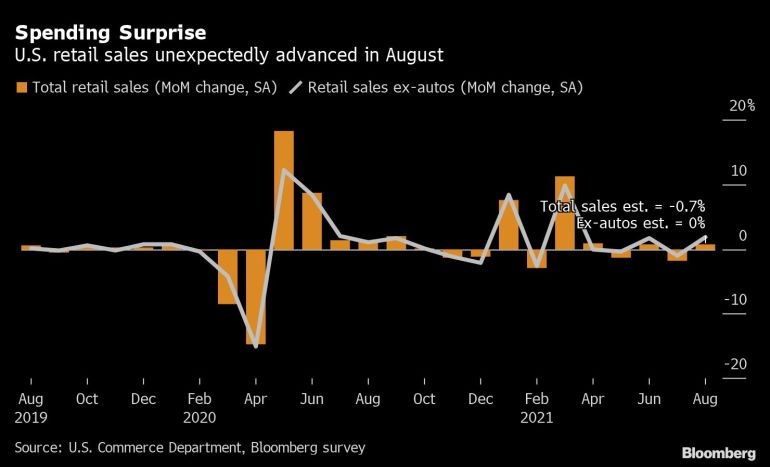 Meanwhile, Labor Department data showed that initial claims for unemployment assistance ticked up by 20,000 last week to a seasonally adjusted figure of 332,000. The rise was unexpected, following on from the previous week when jobless claims hit a pandemic low.

Why is this data so important?

Jobs market data and retail sales figures are closely watched barometers of US economic health. That’s because consumer spending accounts for two-thirds of US economic growth. And when layoffs are on the rise, it could signal that business activity is slowing down, which may make consumers less certain about their future finances and therefore less inclined to spend.

Got it. So where are Americans spending their money?

There are several potential explanations. August and September are traditionally the back-to-school months for US students, and parents typically stock up on clothing, school supplies and more before their return to the classroom, which could explain the increase in online and department store sales.

Existing home sales, meanwhile, rose 2 percent in July, according to the National Association of Realtors, so Americans could be shelling up to furnish their new nests.

And where aren’t they spending their money?

Notably, restaurants and bars, which saw no increase in sales in August from the previous month. The service industry has been hit hard by the coronavirus pandemic, and while many states have been hesitant to reimpose business-sapping capacity restrictions, concerns about the spread of the Delta variant could be keeping Americans home.

So what does the jobs market data tell us?

That there continues to be something of a disconnect in the labour market between out-of-work Americans and the millions of jobs that need filling.

Job openings reached a record 10.9 million in July, but about 8.7 million Americans were considered unemployed the same month. Hiring slowed in August, with the US adding just 235,000 non-farm payroll jobs.

Some explanations for the lag in hiring could be workers’ hesitancy to take service-industry jobs that could potentially expose them to COVID-19, ongoing childcare issues ahead of in-person school reopenings and the decision by some workers to retire early.

Some workers were previously receiving a $300 federal top-up to state unemployment benefits, giving them a bit of a cushion as they looked for jobs and in some cases allowing them to be more selective about their next move. But those benefits expired at the beginning of this month, which is expected to spur people back into the workforce.

In the meantime, companies, including online retail behemoth Amazon, have been trying to entice workers back quickly with sign-on bonuses, increased hourly wages and other incentives.

That is what economists — and policymakers — are eager to find out. Both expect hiring to pick up as children head back to school and federal unemployment benefits expire.

The labour market’s health impacts a number of economic factors as well. The US central bank has set “substantial further progress” toward maximum employment as one of its goals before raising interest rates from their near-zero levels or pulling back on their fiscal support.

All of this means September is sure to be an interesting month for the US economy — so stay tuned.