Central Bank of Sri Lanka Governor Weligamage Don Lakshman will step down Sept. 14 as the nation faces a deepening forex crisis that threatens its ability to import goods and service debt.

“I have not taken any decisions against my conscience,” Lakshman said Friday, adding that he had originally planned to retire when he turned 80 next month. “There is a political economic ideology which I believe in and continue to believe in being correct,” he said, without elaborating. 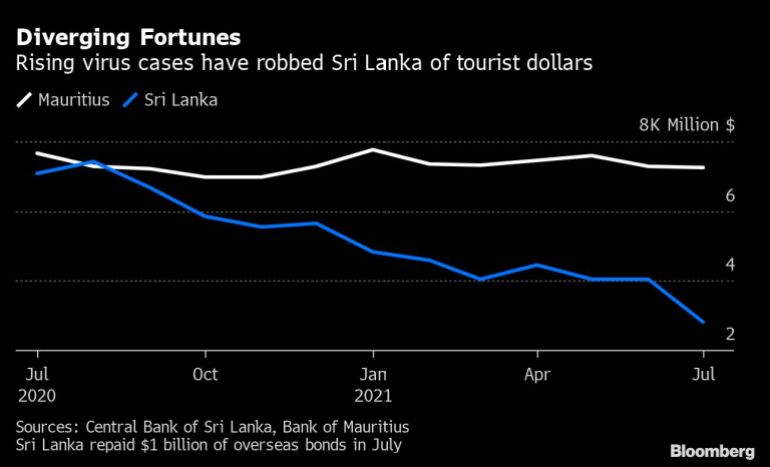 The pandemic has created an “extraordinary period of disruption” to the economy and the central bank “had to come in with resources to look after the people,” Lakshman said. An “excessive money supply” — which the bank tried to address last month with a surprise rate hike — “can be easily reduced with the budget being attended to and careful fiscal consolidation.”

Sri Lanka’s forex reserves dropped to $2.8 billion in July after it used a part of the pile to repay $1 billion of debt. That dragged the import cover to 1.8 months, and well below the minimum desired three months. The problem was compounded by a crash in earnings from tourism due to the pandemic, prompting S&P Global Ratings to cut the country’s outlook to negative.

The downgrade added to doubts about the nation’s ability to service $1.5 billion of debt that matures next year. Sri Lanka’s risk premium for a default is among the highest in Asia, with the five-year credit default swaps at 1,338.12 basis points as of Thursday.

Speculation had been building that President Gotabaya Rajapaksa may reappoint former central bank Governor Ajith Nivard Cabraal to steer the monetary authority through the crisis. “It is very likely,” Cabraal said when reached by phone earlier Friday and asked whether he would be reappointed as governor of the CBSL.

For now, the central bank has limited the amount of foreign currency that can leave the country, as well as tightened import rules to discourage purchases of items including chocolates, dairy products, wines, cosmetics, clothes and electronics.

The monetary authority unexpectedly raised its benchmark interest rate in August, citing the role of low credit cost in a sustained increase in imports, which led to a widening of trade deficit. The rate action was also to preempt the buildup of any excessive inflationary pressures, the bank had said then.