Didi Global Inc. is weighing giving up control of its most valuable data as part of efforts to resolve a Chinese regulatory probe into the aftermath of its controversial U.S. initial public offering, people familiar with the matter said.

The ride-hailing giant has put forth a number of proposals to appease the powerful internet industry overseer, including ceding management of its data to a private third party, the people said, asking not to be identified talking about internal deliberations. Regulators have signaled a preference for that third party to be state-controlled, one of the people said. It’s uncertain how such an arrangement would impact Didi’s access to the data, which is crucial to helping the firm orchestrate 25 million rides a day between some 400 million riders and drivers.

Also unclear is whether the proposals would appease the watchdog. Didi is fighting to ensure its survival after forging ahead with its American float despite objections from officials worried that a foreign listing could leak data and undermine national security. Regulators regarded its decision to go public despite pushback from the Cyberspace Administration of China as a challenge to Beijing’s authority.

They are weighing a range of potential punishments, including a fine, suspension of certain operations or the introduction of a state-owned investor, the people said. One proposal on the table was to bring in a state-owned firm with a larger stake than current top shareholders SoftBank Group Corp. and Uber Technologies Inc., one of the people said. Also possible is a forced privatization and delisting or withdrawal of Didi’s U.S. shares, though it’s unclear how such an option would play out.

Deliberations are at a preliminary phase and the outcomes likely won’t be finalized till after weeks or even months of review, the people said. But Beijing is likely to impose harsher sanctions on Didi than on Alibaba Group Holding Ltd., which swallowed a record $2.8 billion fine after a months-long antitrust investigation and agreed to initiate measures to protect merchants and customers, the people said.

Didi could serve as a test case for a broader Chinese government effort to wrest back control of the data that tech giants hoover up from hundreds of millions of users daily, a fount it considers vital to the economy and social stability. China’s government has proposed creating a joint venture with internet firms that would oversee that information, a project led by the People’s Bank of China, Bloomberg News has reported.

Didi’s June 30 IPO was the trigger for a renewed assault on internet giants that at one point wiped out more than $1 trillion of market value from Chinese stocks. The subsequent wave of crackdowns on industries from private online education to ride-hailing and social media has spooked investors, prompted the Securities and Exchange Commission to more closely examine the country’s companies, and all but halted a lucrative annual $40 billion train of U.S. floats by Chinese firms.

China’s campaign to rein in its giant internet industry is entering its 10th month, a roller-coaster ordeal that’s prompting nervous investors to ponder the longer-term ramifications of a crackdown on firms from Jack Ma’s Ant Group Co. and Alibaba to food delivery giant Meituan.

Xi Jinping’s government is trying to strike a delicate balance between reining in the power of China’s tech giants without inflicting serious damage on a critical sector that has bolstered economic growth. But last month’s actions demonstrated Beijing’s resolve to go after private enterprises to address social inequities, seize control of data, and rein in powerful interests. While the initial campaign focused on the way internet giants abused their alleged monopoly power, the latest flurry of actions involved the CAC as well as the State Council, China’s highest-level government body. 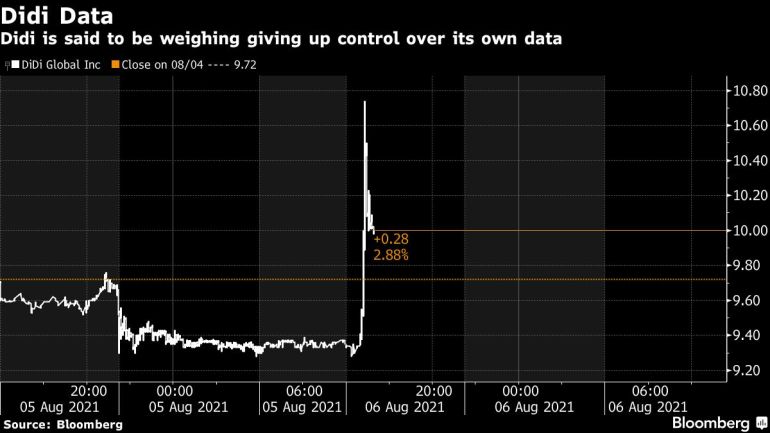 Didi’s listing in the U.S. came just as Xi is looking for ways to control the vast reams of data held by tech giants, in part to ensure the Communist Party spreads the wealth beyond a small circle of billionaires. Regulators are waking to the threat posed by private companies. In 2017, the government passed laws that required foreign companies like Apple Inc. or Amazon.com Inc. to store Chinese data within the country, while forcing them to secure local partners to manage that hoard of information via local datacenters. Didi may be contemplating a similar model, the people said.

It’s unclear now what lies in store for Didi, which has shed a third of its market value since raising $4.4 billion via the second-biggest American initial public offering for a Chinese company. The debut — which followed years of run-ins with regulators after a pair of murders in its network provoked a public backlash — turned co-founder Cheng Wei into a billionaire and rewarded long-time backers SoftBank, Tiger Global Management and Temasek Holdings Pte.

Its fate may lie in the hands of the CAC, which pounced just days after the IPO to announce a cybersecurity review of the company’s data practices, then banned Didi’s app from the country’s app stores.

Chinese regulators largely supported the idea of an IPO, but have expressed concerns about Didi’s data security practices since at least April, people familiar with the matter have said. In one example of concern, Didi had disclosed statistics on taxi trips taken by government officials, one of the people had said, although it’s not clear whether that specific issue was ever raised with the company.

(Updates with Didi shares in fifth paragraph)
–With assistance from April Ma.