Tencent Holdings Ltd shares were on track to fall by their most in 10 years on Tuesday after a Chinese state media outlet branded online video games “spiritual opium”, stoking concern that the sector may be next in regulators’ crosshairs.

State-run Economic Information Daily in an article on Tuesday said many teenagers were addicted to online video games and called for more curbs on the industry. The outlet is affiliated with China’s biggest state-run news agency, Xinhua.

The newspaper repeatedly cited Tencent’s flagship game, Honor of Kings, which it said was the most popular online game among students who sometimes played for up to eight hours a day.

“No industry, no sport, can be allowed to develop in a way that will destroy a generation,” the newspaper said, likening online video games to “electronic drugs”.

Tencent did not respond to the Reuters news agency’s request for comment. 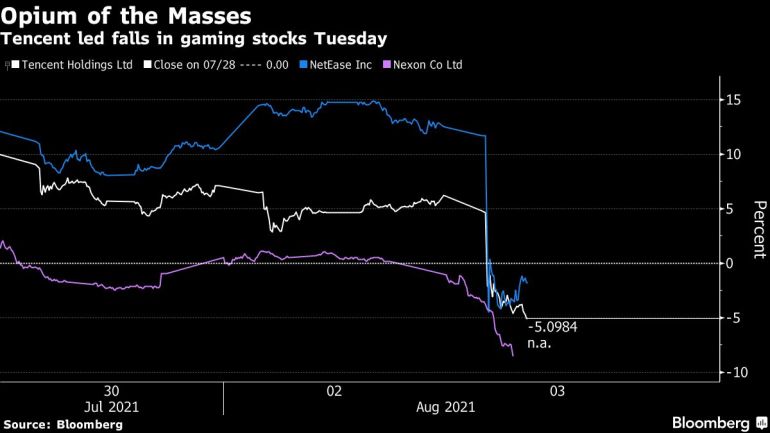 In online video games, authorities have sought to limit the hours that teenagers can play, and companies including Tencent have implemented anti-addiction systems that they say cap young users’ game time.

The Economic Information Daily, citing legal experts and professors, said current curbs were not able to keep up with the sector’s development to prevent youth addiction, and that there should be more “mandatory means” to increase the social responsibility of video games companies.

Tencent has already been under pressure alongside big technology peers because of the increased regulatory action on online platforms. Last month, it was barred from exclusive music copyright agreements and fined for unfair market practices.