Wall Street pros are stepping in to fuel the latest bout of meme-stock volatility amid signs of individual investor fatigue.

That’s according to data compiled by Vanda Research, a firm that tracks retail flows in the U.S., which showed weak demand for retail-trader favorites after basket of 37 of those companies posted their biggest gains since June on Tuesday.

Stocks preferred by day traders soared 10% Tuesday, the most since early June as trading volumes accelerated. Long-short hedge funds that are quick to dump bearish bets were likely among drivers for Tuesday’s strength in stocks that have high levels of short interest, Vanda said in a report.

“Despite the broad rally in meme stocks, retail purchases were mainly concentrated on AMC, with over $56 million in Tuesday’s session,” Vanda’s Ben Onatibia and Giacomo Pierantoni wrote in a note. “All other meme stocks combined, totaled a paltry $4 million in net retail buying.”

AMC Entertainment Holdings Inc. surged 20% Tuesday to the highest since July 9. Shares of the movie theater operator held onto gains of 4.8% at 1:28 p.m. in New York after initially fluctuating between gains and losses. 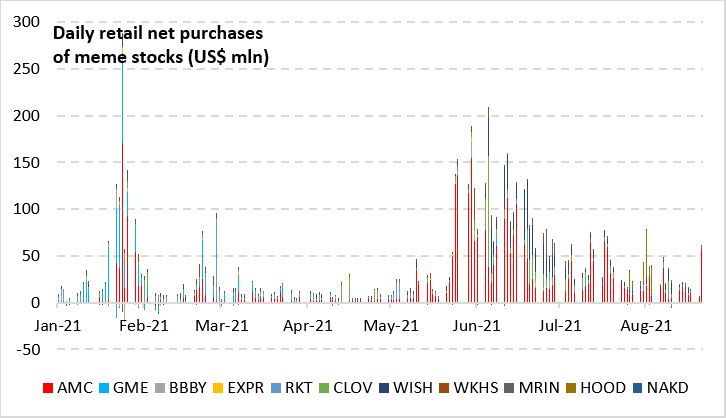 The slowing demand for retail investors who have bragged in the past about their intent to buy and hold shares was apparent in stocks like GameStop, the original meme stock. The video-game retailer swung between gains and losses on Wednesday after soaring 28% for the best day in five months the session before. Clothing retailer Express Inc., which reported second quarter earnings results that blew past expectations, tumbled 8.7%.

This week’s rally for AMC Entertainment and GameStop delivered another blow to short sellers. Investors betting against the pair are down more than $1 billion so far in the past three days, according to data compiled by S3 Partners. That brings combined losses for the year to $10.2 billion for bears on the two companies, the data show.

Skillz Inc. and Support.com Inc. are among the most highly shorted stocks to have seen a recent acceleration in retail purchases, Vanda data show. Redwood City, California-based Support.com soared as much as 22% Wednesday after closing at the highest level October 2004.