The currency rose as much as 1.2% after the Monetary Policy Committee held its one-week repo rate at 19% for a fifth month as forecast by all 20 analysts surveyed by Bloomberg.

The decision appeased traders who were concerned that the policy maker would succumb to political pressure and lower borrowing costs despite the deteriorating outlook for inflation. Consumer-price gains accelerated to 18.95% in July, virtually wiping out Turkey’s real policy rate.

The benchmark rate “will continue to be determined at a level above inflation to maintain a strong disinflationary effect until strong indicators point to a permanent fall in inflation and the medium-term 5% target is reached,” the central bank said. 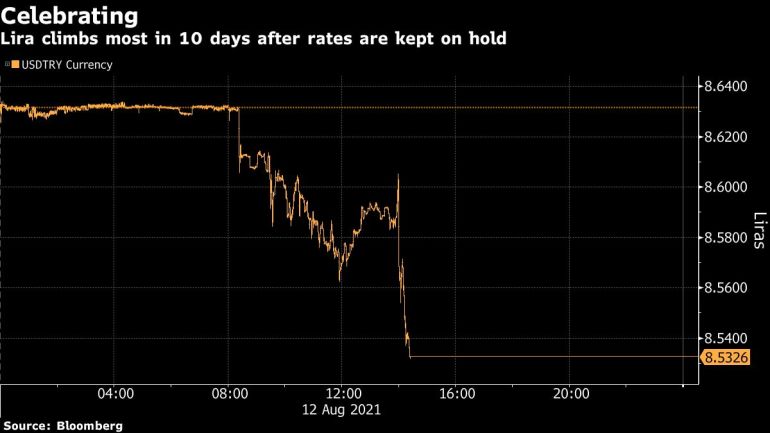 Yet the move now sets Governor Sahap Kavcioglu on a possible collision course with the president, who holds the unorthodox view that higher interest-rates fuel consumer-price gains and is seeking lower borrowing costs to fuel growth. Erdogan has fired three of the previous bank governors. 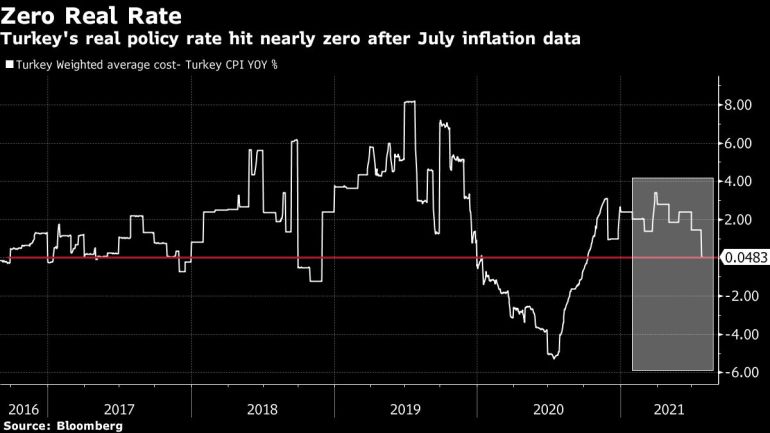 The currency has depreciated around 16% since Kavcioglu’s appointment in March, compounding the rise in consumer prices that have been driven by a weak lira, rising commodity prices and a drought that badly affected harvests.

The lira was trading 0.8% higher at 8.5633 per dollar at 3:45 p.m. in Istanbul, after weakening more than 4% over the past week to a low of 8.6815 per dollar on Wednesday, spurred by Erdogan’s latest calls for lower borrowing costs.

“An easing cycle is unlikely to commence until late this year when inflation looks set to fall sharply as the effects of previous falls in the lira start to unwind,” said Jason Tuvey, a senior emerging-markets economist at Capital Economics, adding that inflation is likely to remain elevated at 18-19% over the next few months.