West Texas Intermediate futures have been whipsawed as a dispute between Saudi Arabia and the United Arab Emirates stymies OPEC+ plans to revive halted supplies. The grade hit a six-year high early Tuesday before easing back. White House Press Secretary Jen Psaki said U.S. officials have been speaking to both sides, and OPEC+ delegates say consultations continue to seek a compromise.

“Uncertainty seems to prevail after the surprising outcome of the petro-nations’ latest meeting and its inability to agree on the future of their supply deal,” said Norbert Ruecker, head of economics at Julius Baer Group Ltd. in Zurich.

Refiners have reaffirmed their appetite for barrels, with at least five Asian oil processors planning to seek their full contractual volumes from Saudi Arabia, even as the kingdom jacked up prices for August. Companies have been unable to source cheaper alternatives. 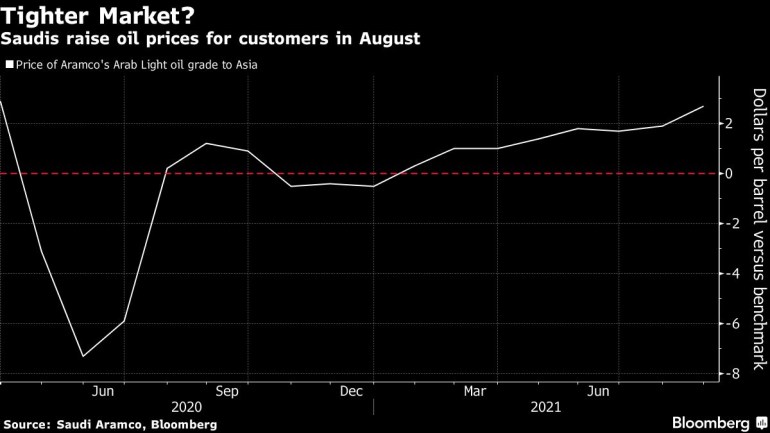 Oil has soared in 2021 as the rollout of coronavirus vaccines permits major economies to reopen, spurring a revival in global consumption. The Organization of Petroleum Exporting Countries and its allies have returned some of the production they took offline at the height of the pandemic, but they’re struggling to agree on a way forward. Without a new deal, they’re set to keep supply steady in August, further tightening the market.

Saudi Aramco increased the official selling price for Arab Light by 80 cents a barrel to $2.70 above the regional benchmark for Asia. That’s the biggest month-on-month gain since January, and suggests the oil giant won’t boost supply next month.

WTI for August delivery traded up 0.6% at $73.81 a barrel on the New York Mercantile Exchange at 1:42 p.m. London time.It fell 2.4% on Tuesday as a stronger dollar spurred a sell-off across commodities.

Brent for September settlement also rose 0.6% to trade at $74.97 a barrel on the ICE Futures Europe exchange.

JPMorgan Chase & Co. is among banks that anticipates a deal will be found. OPEC+ is expected to eventually agree in the coming weeks to increase production by 400,000 barrels a day each month for the rest of 2021, it said in a note.

At the same time, the widening fault lines between the two Gulf allies may induce cartel members to pump more unilaterally, risking a free-for-all that could crash prices. There is potential for a price war, but all involved will try to avoid that, according to ING Group NV.