To the world’s investors, the saga over Didi Global Inc. has made China’s biggest tech firms a riskier bet as President Xi Jinping seeks to control one of the country’s most valuable resources: Big data.

Didi is by most measures an appealing success story. The firm controls almost the entire ride-hailing market in China, and counts SoftBank Group Corp. and Tencent Holdings Ltd. as major shareholders. Didi was actually profitable in the first quarter, a rarity for the industry. Its initial public offering last week was the second biggest in the U.S. by a company based in China, and it was well-received. Didi sold 317 million shares — about 10% more than originally planned.

And yet the listing on the eve of the Communist Party’s centenary did not appear to trigger celebration back in Beijing. Instead, two days after the IPO, China’s cyberspace regulator said it was reviewing the company on national security grounds. Two days after that, the regulator said the firm had committed serious violations in the collection and usage of personal information. It then ordered the company’s app to be removed from stores.

The stock plunged 28% in pre-market trading on Tuesday as US markets reopened.

What made Didi so valuable to investors is the same thing that makes it and other tech companies a potential threat to Beijing: It holds vast amounts of sensitive data from half a billion annual active users, mostly in China. Over the past year, Xi’s government has sought to gain control of this data, both to protect users from abuse and find a way to use it to spur broad-based economic growth rather than simply enrich a cohort of billionaires that could potentially challenge the Communist Party’s authority.

The Cyberspace Administration of China suggested Didi delay its IPO weeks before the debut to check its network security, the Wall Street Journal reported, citing people with knowledge of the matter. The watchdog was particularly concerned that listing in the US would require Didi to disclose its major vendors and suppliers, which could leave it vulnerable to security breaches, it said, citing unidentified people.

Didi said in an emailed statement on Monday it was unaware of the Chinese watchdog’s decision to suspend user registrations and remove Didi Chuxing from app stores ahead of its listing. 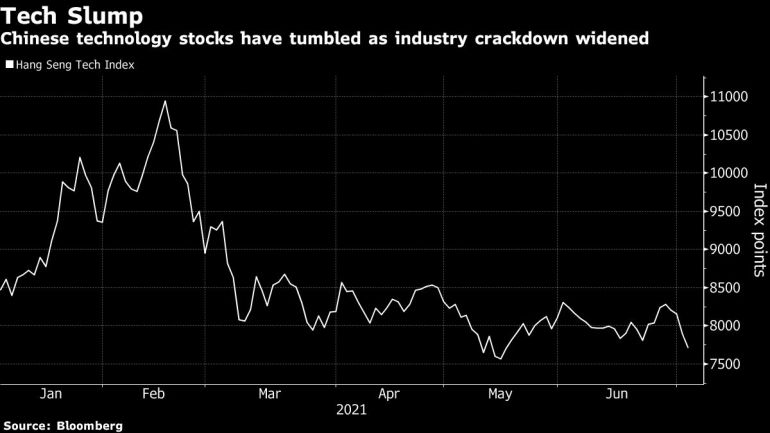 Didi, like many other Chinese tech giants, grew rapidly in the absence of comprehensive oversight. Beijing is now seeking to plug regulatory loopholes, but it needs more time. By listing in the US, Didi effectively sidestepped an extensive approval process by China’s securities watchdog at a time when officials have pushed for more firms to raise funds at home.

“Beijing is not pleased to see its national champions cosying up to foreign stakeholders,” said Xiaomeng Lu, a senior analyst at Eurasia Group, a political risk consultancy. “It also wants tech companies to keep their core assets – data and algorithms – in China.”

Some projections show China will hold a third of the world’s data by 2025, giving it potentially a massive competitive advantage in areas like artificial intelligence that will drive the modern economy. And the geopolitical stakes are also high: The Biden administration is reviewing what user data should be off-limits to China, and Beijing is similarly concerned about handing over information that could be used by its adversaries.

China’s campaign to impose tougher controls on the nation’s tech firms accelerated late last year as the country recovered from the impact of the COVID-19 pandemic and tensions with the US intensified. Officials launched a powerful broadside on the intech sector when they pulled Ant Group Co.’s $35bn dual listing in Shanghai and Hong Kong at the 11th hour.

Like Didi, Ant dominated its field. In just a decade, the firm, an affiliate of Jack Ma’s Alibaba Group, had grown to reshape the lives of millions of Chinese through its Alipay app as well as the giant Yu’ebao money-market fund.

By March, it was clear authorities were widening the offensive. President Xi, at a meeting of the Communist Party’s top financial advisory committee, warned that Beijing would go after so-called “platform” companies that have amassed data and market power. This term effectively covers a range of firms that offer services to hundreds of millions, from Didi to food delivery giant Meituan and e-commerce leaders like JD.com Inc.

The crackdown has weighed heavily on the tech sector. Alibaba’s Hong Kong-traded shares have lost 33% since their October high, while Tencent (which is China’s leader in social media, games and music publishing) is down 28% since a record in January. Didi fell as much as 11% on Friday.

China is not alone in trying to control the dominance of large technology firms. US Congress is seeking to force companies such as Amazon.com Inc. and Apple Inc. to radically change their business models, while Google faces a sweeping European Union probe into its advertising technology.

“We have entered a new period globally where the regulatory scrutiny on tech has increased and will be ongoing for some time,” said Joshua Crabb, a senior portfolio manager at Robeco in Hong Kong.

But the scale and speed of Xi’s campaign speak to the Communist Party’s obsession with control. The Party is battling what it sees to be multiple threats to national security and its five-year plan in October included a focus on security issues for the first time. A rivalry with the US is only intensifying under the Biden administration, which recently rallied allies to present a more united front against Beijing.

The issue is Chinese entrepreneurs often turn to U.S. stock exchanges, which offer founders something they can’t get at home. A deep pool of international capital and lower barriers to entry mean the world’s largest market remains a key destination for Chinese and Hong Kong firms, who were fundraising at a record pace earlier in the year. Potential forced delistings by the New York Stock Exchange and tougher requirements on the Nasdaq have been no deterrent to Chinese companies in need of cash.

Though the Communist Party has little say over the US listing process for its private companies, it can often nudge top-level management. But exerting influence over a business’s operations — like it did for Didi — is a far bolder move and puts the government’s stamp on the U.S. stock market.

China’s cyberspace regulator “is trying to step in to exert their influence in this whole process,” said Chucheng Feng, co-founder and partner of Plenum, a research firm specializing in China’s politics and economy. “They’re trying to use Didi to set up this example of how a company will become listed in New York moving forward.”