China’s biggest ride-hailing firm Didi Global Inc said that the removal of its “DiDi Chuxing” app from smartphone app stores in China is expected to have an adverse impact on its revenue.

“The Company expects that the app takedown may have an adverse impact on its revenue in China,” the company said in a statement.

The Cyberspace Administration of China (CAC) said it had told Didi to make changes to comply with Chinese data protection rules. The CAC did not specify the nature of Didi’s violation in a statement on its social media feed.

Didi responded by saying it had stopped registering new users and would remove its app from app stores. It said it would make changes to comply with rules and protect users’ rights.

The removal of Didi’s app, which does not affect existing users, comes days after Didi made its trading debut on the New York Stock Exchange in an initial public offering that raised $4.4bn.

On Monday, the watchdog expanded the probe to include two other recent US listers: platforms run by Full Truck Alliance Co. and Kanzhun Ltd., which raised $2.5bn in their own debuts in past weeks.

The series of events shook investors, sending SoftBank, which is an investor in Didi, down more than 6 percent and hammering Didi’s peers from Tencent Holdings Ltd. and Alibaba Group Holding Ltd. to Meituan.

“Didi seems to have rushed up their IPO process, indicating that there might be early signs of upcoming government scrutiny,” said Shen Meng, director of Beijing-based boutique investment bank Chanson & Co. “The Didi probe, together with the other investigations announced today, show how the tensions between China and the US is spilling over into the capital markets. The incident will suppress Chinese companies’ desire to go public in the US. It also adds to huge uncertainties facing investors who bet their money on US-listed Chinese stocks.” 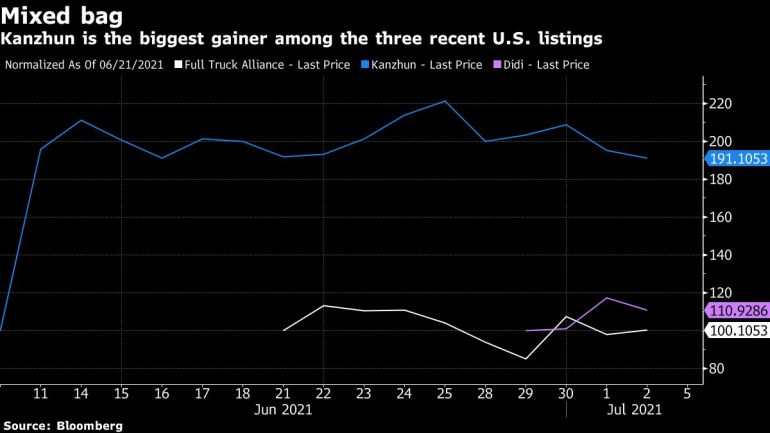 Didi has a dominant position in the online ride-hailing business in China and operates in 4,000 locations across 16 countries.

Didi said it will strive to rectify any problems, and will protect users’ privacy and data security.

‘Cannot be allowed to use the data’

Since late last year, Chinese internet regulators have cracked down more sharply on the country’s tech giants for violations of rules.

The Global Times, a tabloid published by the ruling Communist Party’s official People’s Daily newspaper, said in a Chinese-language commentary on Monday that Didi’s apparent “big data analysis” capability could pose risks to the security of individuals’ personal information.

“No internet giant can be allowed to become a super database of Chinese people’s personal information that contains more details than the country, and these companies cannot be allowed to use the data however they want,” Global Times said.

Didi gathers vast amounts of real-time mobility data everyday. It uses some of the data for autonomous driving technologies and traffic analysis.

In its IPO prospectus, Didi said “we follow strict procedures in collecting, transmitting, storing and using user data pursuant to our data security and privacy policies.”

A senior Didi executive said on Saturday that the company stores all China user and roads data at servers in the country and it is “absolutely not possible” that it passed data to the United States.

China has been clamping down on its home-grown technology giants over antitrust and data security concerns.

Didi made its trading debut on Wednesday in an IPO that valued the company at $67.5bn, well down from the $100bn it had hoped for, which potential investors had resisted.

“(It) indicates the process could take a while, but they have a large installed base so near-term impact (is) likely muted for now,” he said.

A notice on Didi’s China app showed it had updated its user information and data privacy policy on June 29, the day before its trading debut. In a statement to Reuters, Didi described the move as a “regular update” after adding two new services on the app under its chauffeur business.

Founded by Will Cheng in 2012, the company had previously been subject to regulatory probes in China over safety and its operating licence.