By Nicholas Larkin and Mark BurtonBloomberg

The commodities boom has taken a knock this month, and while there are many reasons to still bet on a so-called supercyle, it’s unlikely to be plain sailing.

Vast amounts of stimulus, economies reopening from the pandemic and strong Chinese demand have driven a surge in raw-material prices this year, some to record highs. Yet they’ve slumped in the past two weeks – with some wiping out gains for the year – on a more hawkish U.S. monetary policy tone, China’s bid to cool inflation pressures and better weather for crops.

While that’s blown away some of the speculative froth from the market, the big question is whether the latest commodities bull run has passed its peak or is just taking a breather.

Either way, the direction may not be broad based, with each market having its own individual levers pushing and pulling. Copper traders need to balance a short-term cooling in China with long-term green-energy prospects. Oil’s dip could be limited by falling stockpiles and supply concerns, iron ore is being whipsawed by Chinese policies, while gold will largely be at the mercy of when Federal Reserve tapering starts. 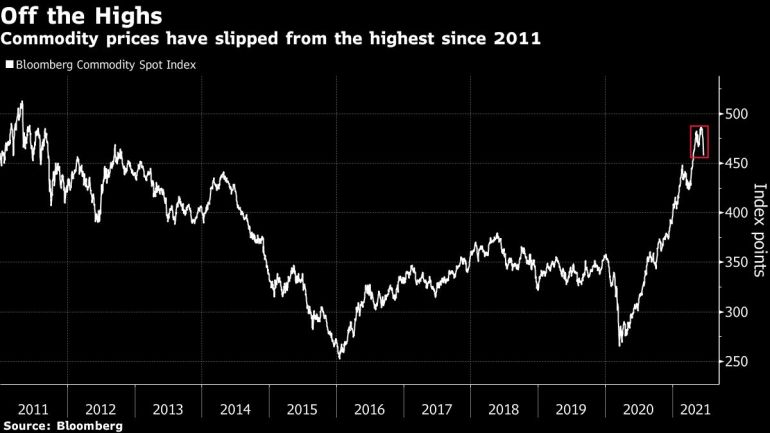 “I can still see a lot of inflationary pressures in the supply chain, and the reality is that it’s going up,” said Michael Widmer, head of metals research at Bank of America Merrill Lynch in London. “From a commodity-price perspective, I can see the structural argument still for prices to stay elevated or go higher going forward.”

The year-long rally to a record in May was sparked by surging Chinese demand, but there are signs orders from manufacturers are starting to wane.

Bulls are confident that the rest of the world will pick up the slack as renewable energy and electric-vehicle investment creates a step-change in demand in Europe and North America. Still, it could be a while before that spending makes its way to factory order books, and softer demand in the meantime could embolden bears who say current high prices aren’t justified by fundamentals. 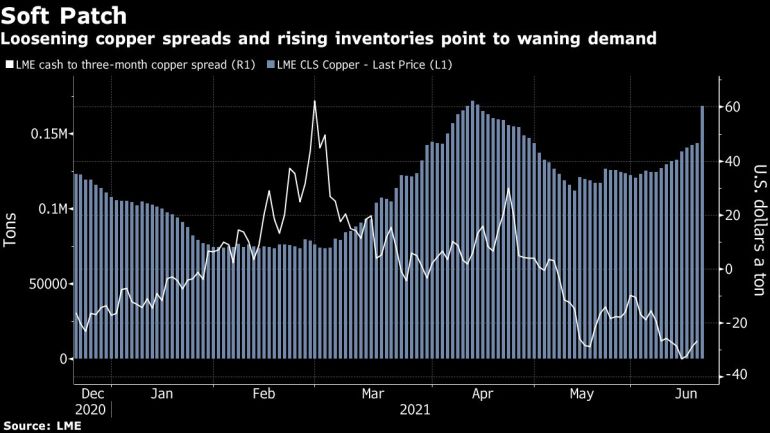 It might be particularly hard to predict the trajectory for iron ore, the most volatile commodity right now. It surged to a record, collapsed into a bear market and then rebounded back into a bull market within a matter of weeks traders grappled with the murky outlook for demand in top consumer China.

Both bulls and bears are keeping a close eye on China’s simultaneous goals to contain the inflationary pressures stemming from high commodity prices and to make its vast steel sector greener. The country’s steel output is still on track to smash another record this year, which might prompt further actions from authorities to restrict production and whipsaw iron ore yet again. 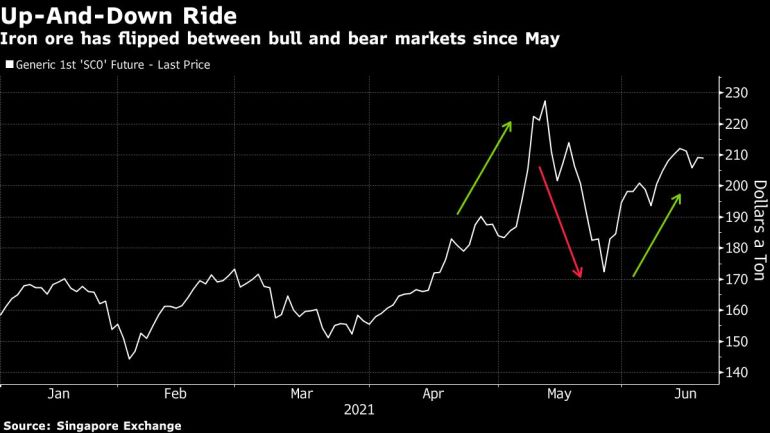 Showers across the U.S. corn belt and uncertainty over biofuel policy have helped send crop markets tumbling lately, but much more rain will be needed to ensure bumper harvests in one of the world’s top suppliers. More than a third of America’s corn and soybean area is suffering from drought, after record-breaking heatwaves.

It’s a China story on the demand side, with the nation’s huge imports sending crop and hog futures soaring in the past year. Major traders like Cargill Inc. and Viterra say crop markets are in a “mini-supercycle” that could last half a decade, driven by increased biofuel demand and continued Chinese buying.

Focus is already turning to how sharply demand will recover over the summer. While there are signs the U.S. is leading the way as western economies reopen, the spread of the delta variant of the coronavirus, first identified in India, is raising renewed concern about the path for consumption in parts of Asia.

For now, it looks as though the market is going to need extra supply in the second half of the year. The OPEC+ group is yet to confirm plans for production beyond July, while U.S. shale producers continue to preach discipline as they’re making money again. All the more reason then, that the focus is so intense on when the market will see Iranian supply return as talks with the U.S. continue.

Bullion is more susceptible to Federal Reserve actions than perhaps any other commodity. It tumbled to the lowest since early May after the U.S. central bank signaled monetary policy tightening could start earlier than expected and the dollar jumped. 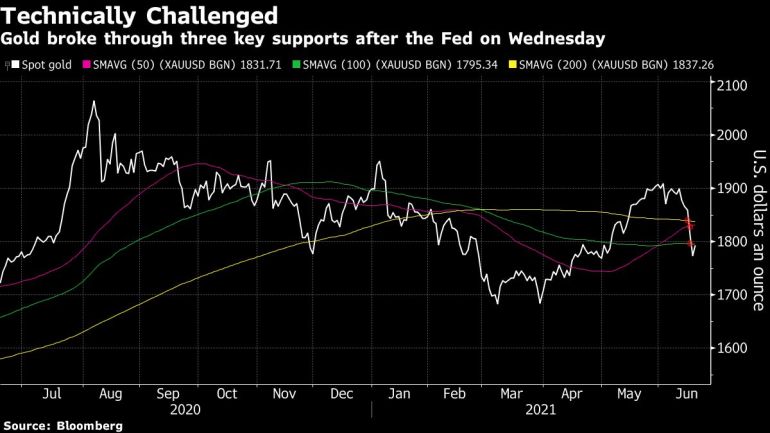 Although the precious metal is often bought as a hedge against inflation, the Fed signaled this week that higher-than-expected inflation would not be allowed to persist, opening up the door for faster stimulus tapering. That weighs on the appeal of non-interest bearing gold. UBS Group AG forecasts prices at $1,600 an ounce by year-end, compared with about $1,780 now.