Problems at a Chinese nuclear power plant near Hong Kong probably aren’t cause for any concern, experts said. Some of the politics behind the situation just might be.

An issue discovered inside China General Nuclear Power Corp.’s Taishan Unit 1 reactor, in which presumably damaged fuel rod casings leaked inert gas, has happened enough times in the industry that operators know how to manage it and it’s usually “not any kind of threat,” according to Jeff Merrifield, a former U.S. Nuclear Regulatory Commissioner.

What’s perhaps more disquieting is the seeming lack of communication between state-owned CGN and Electricite de France SA, the designer and minority owner of the plant. An EDF unit alerted the U.S. government on the issue, and on Monday the parent firm called for CGN to provide more information and to meet to discuss the operation’s issues.

“The fact that EDF has reached out to a U.S. agency suggests some concern with their access to such critical information,” said M.V. Ramana, a nuclear scholar and professor at the University of British Columbia. 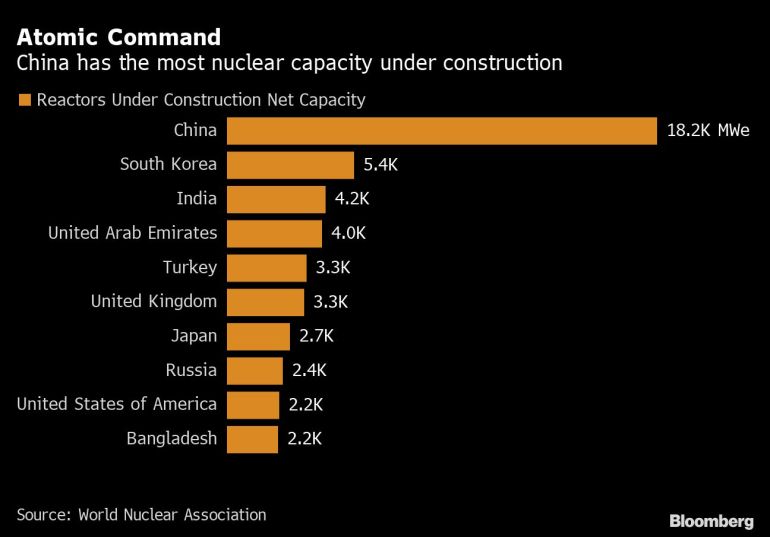 A CGN spokesman declined to comment Tuesday, referring to a Sunday statement that the plant is operating safely and environmental indicators in and around it are normal. EDF didn’t immediately respond to a request for comment on information flow between the partners.

The Taishan plant, about 130 kilometers (80 miles) west of Hong Kong, is 30% owned by EDF, with CGN holding the majority stake.

In September, China’s National Nuclear Safety Administration inspected and gave clearance for the refueling of Unit 1. Issues with a gas buildup at the reactor were first detected in October, EDF said Monday.

EDF says it appears that coating on some fuel rods has deteriorated, leading to an increased concentration of some noble gases. China’s NNSA said in April the plant’s Unit 1 had experienced an operational incident that was categorized as minor, and not of safety significance.

During a refueling, it’s possible that a stray item, something as small as a wire filament from a brush, can be left behind in the reactor, said Merrifield, an NRC commissioner from 1998 to 2007 who is now an attorney at Washington D.C.’s Pillsbury Winthrop Shaw Pittman LLP.

That filament could then get picked up by the water that circulates in the closed loop of the reactor, and rub up against the external coating of uranium fuel rods, potentially releasing radiation and gases. If the concentrations remain low enough, the plant can keep operating safely so long as it monitors radiation carefully to keep workers safe, he said.

“It’s not common, but it’s something that’s happened a sufficient number of times that it’s a well-understood phenomenon and relatively easy to manage,” Merrifield said.

Nuclear experts said they’re hoping for more transparency in the future. They see the carbon-free power source as key to the world’s fight against climate change, but raise concern over public sentiment after a handful of high-profile accidents such as Chernobyl and Fukushima.

“A lack of openly available information about this issue may be making people unnecessarily concerned about what’s going on,” Merrifield said.

Also complicating the issue is that CGN is among 59 Chinese companies blacklisted by U.S. President Joe Biden’s administration for purported ties to Chinese military or surveillance industries. EDF said its Framatome subsidiary had reached out and shared information with U.S. authorities because some of its nuclear fuel experts are in the U.S.

Information flow between the firms may also be hampered as a result of their competition in some regions. While CGN is a partner with EDF, the world’s largest operator of nuclear power stations, in projects like the U.K.’s Hinkley Point C, it’s increasingly also a rival. CGN and China National Nuclear Corp. are marketing the Chinese-designed Hualong One reactor and just completed the first overseas unit in Pakistan.

“To understand the dynamics between China and France you have to understand the Chinese want to sell the Hualong One and the French want to continue selling French reactors,” said Chris Gadomski, a nuclear analyst with BloombergNEF in New York.