Brazil’s central bank lifted its benchmark interest rate by 75 basis points and promised another hike of the same magnitude in June as it moves to bring inflation forecasts back down to target.

The central bank on Wednesday unanimously voted to raise the Selic by 75 basis points to 3.5%, in line with estimates from all 39 economists in a Bloomberg survey and also the guidance given by policy makers at their prior meeting in March. 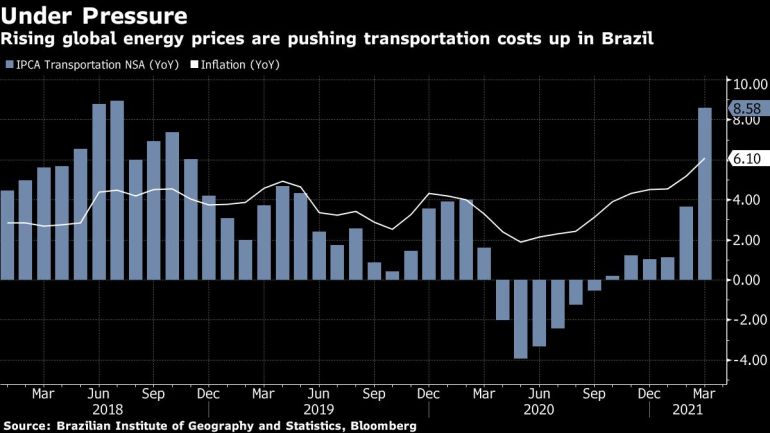 “For the next meeting the Committee foresees the continuation of the partial normalization process with another adjustment of the same magnitude in the degree of monetary stimulus,” the bank’s board said in a statement accompanying the decision.

The bank, led by its President Roberto Campos Neto, is acting to rein in inflation that’s surged above the target ceiling to a four-year high. Food and fuel costs have jumped in recent months, and the government recently restarted emergency aid that will firm up demand. Put together, analysts see consumer prices above target this year and next despite an incipient recovery.

“It’s the right decision since there are still risks in the inflation outlook,” David Beker, chief Brazil economist at Bank of America Corp, said before the bank’s announcement, pointing to energy and wholesale goods as top inflation drivers.

Helping policy makers’ inflation fight is a stronger real. The Brazilian currency has jumped 5.5% in the past month, the biggest gain among emerging market currencies, making imports less expensive.

Yet consumer prices rose 6.17% in the year through mid-April, and many economists see that reading approaching 8% in May. The central bank targets annual inflation at 3.75% this year, with a tolerance range of plus or minus 1.5 percentage points.

Last month, President Jair Bolsonaro’s administration started paying out another round of monthly stipends at a total cost of 44 billion reais ($8.2 billion). Lawmakers have recently indicated they will seek an extension of that aid if the government does not accelerate plans for a new social program as the coronavirus continues to spread through the country.