By Silvia Martinez and Jorgelina do RosarioBloomberg

Argentina is limiting shipments of beef, a staple in the world’s fifth-biggest exporter, the latest unorthodox move by the government to try to contain runaway inflation that’s approaching 50% annually.

President Alberto Fernandez told a key beef export association that it won’t be allowed to sell the product abroad for 30 days, according to a Production Ministry statement released on Monday night. During that period, the government will establish a set of emergency measures for the industry.

“The issue with beef prices clearly got out of control,” Fernandez told a local radio station on Tuesday morning. International beef demand “created distortions with domestic prices that can’t be tolerated anymore. We can’t keep watching beef prices rise month by month without any justification.” 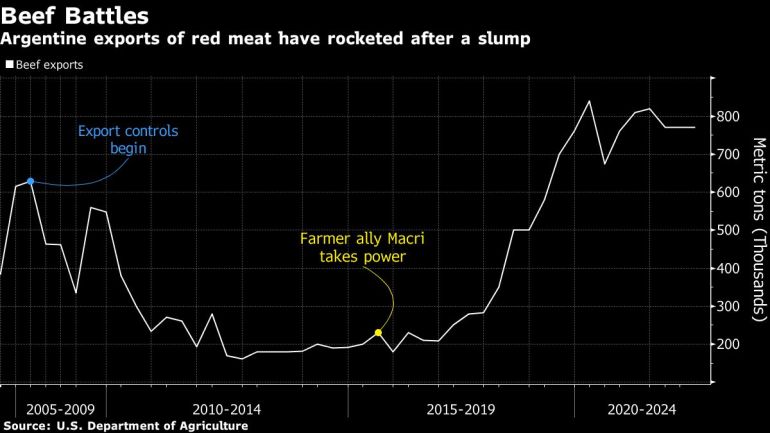 The measure demonstrates that the government is willing to sacrifice much-needed dollars from exports to appease voters ahead of a midterm election later this year. The country’s beef exports have been booming in recent years thanks to China-led demand and sales reached nearly $3 billion in 2020 but the government has been increasingly worried about the political cost of falling domestic consumption.

Argentines, who traditionally have been among the world’s most voracious red-meat eaters, have seen their intake reduced steadily amid declining income and diet changes. A prolonged economic slump means annual per capita beef consumption has fallen to 48 kilograms (106 pounds), the lowest level in data on record, and far less than the 2009 peak of 69 kilograms, according to beef industry group Ciccra.

“The president expressed his concern over the sustained increase in domestic beef prices over the last few months,” the government said in the Monday evening statement. The discussion during Fernandez’s meeting with the export group also included “possible steps to restrict speculative practices” and fiscal evasion. Some of those measures will be adopted over coming days.

Fernandez added that the 30-day suspension period could be curtailed if the implementation of the measures leads to “positive results,” according to the statement. Earlier in the year, the government backtracked on a move to ban corn exports.

Argentina’s four main farm associations, seen as politically opposed to the ruling coalition, didn’t waste time before criticizing the decision, telling their members on Tuesday morning to halt the beef trade in the country for over a week as a way of protesting the measure.

Argentine beef exports have been surging for four years and reached a record in the first two months of 2021, according to Ciccra. The suspension resembles similar policy decisions during 2003-2015, under the presidencies of Nestor Kirchner and his successor, Cristina Fernandez de Kirchner, which led cattle numbers to plunge and the country to lose share in the international market.

The government last month formalized a register to ensure domestic supplies of beef at accessible prices, as well as monitor shipments, as inflation hit 46%, a move farmers feared would be a de facto tool for curbing exports.

Not all beef cuts may be included in the resolution, which hasn’t yet been published, according to a person with knowledge of the matter.

(Updates with Fernandez comments in third paragraph.)
–With assistance from Jonathan Gilbert and Patrick Gillespie.