Iron ore futures surged more than 10% and copper extended its record run amid increasing bets they’ll be among the biggest winners from a commodities boom that’s stoking concerns about inflation around the world.

While analysts struggled to pinpoint a trigger for Monday’s gains in iron ore, they cited several trends including optimism that central banks will retain supportive policies even as the global economy recovers. Expectations China will tighten environmental rules have added to the bull case for copper – seen as vital to the green energy transition – and fueled speculation that steelmakers may front-load iron ore purchases before new curbs kick in.

The gains add to a more than yearlong surge in raw-materials prices that’s shifted into overdrive in recent weeks, with the Bloomberg Commodity Spot Index rising for 14 of the past 15 days to the highest level in almost a decade.

A “Goldilocks scenario” may be forming as strengthening global growth combines with restrained wage pressures and a dovish Federal Reserve, Goldman Sachs Group Inc. commodities analysts said in a May 7 report, the same day weak U.S. jobs figures added to the case for more stimulus. The risk for bulls – and anyone betting on buoyant returns from stocks and bonds – is that the surge in raw materials feeds through to broader measures of inflation and eventually forces central banks to tighten.

For copper, the long-term outlook is also being bolstered by a likely surge in demand as governments target huge investments in renewables and electric-vehicle infrastructure. While copper’s last march to record highs in 2011 was driven by China’s economic boom, analysts expect this rally to be supported by a much broader rise in metals usage.

”We’re in a new world,” Jeffrey Currie, global head of commodities research at Goldman Sachs, said in a Bloomberg TV interview. “We’re seeing a much more balanced growth between the U.S, Europe and China.”

Iron ore futures in Singapore jumped to a record above $226 a ton. Contracts in Dalian rose by the daily limit when the market opened. 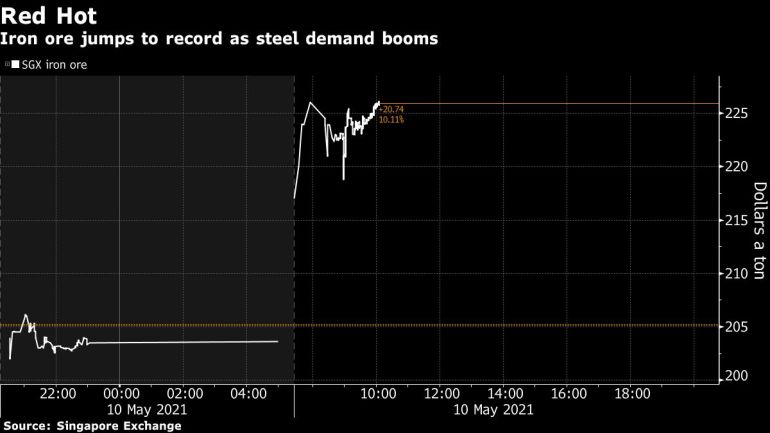 “There’s still quite a lot of room to go,” Evy Hambro, global head of thematic investing at BlackRock Inc., said on Bloomberg Television. “What we’re really doing is we’re testing the upper ranges of commodity markets to work out what the new price range is going to be.”

There were fresh jitters on the supply side as China’s major copper smelters vowed to reduce purchases of mined concentrate this year as the country seeks to curb carbon emissions. While that could ease strains on mine supply, the smelters will need to boost scrap purchases to avoid a slump in production of refined metal.

“It’s notable that the smelters don’t imply a cut to output,” Morgan Stanley analysts Susan Bates and Marius van Straaten said in an emailed note. “They appear comfortable that they can make up the reduction in concentrate purchases with a lift in the use of copper in other forms.” 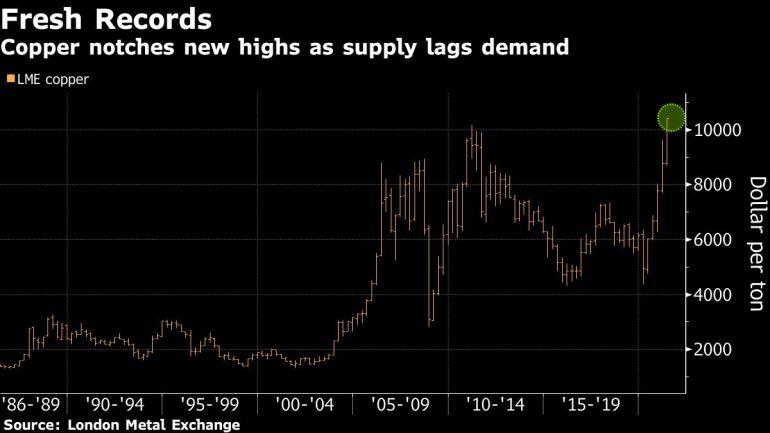 The iron-ore boom comes as China’s steelmakers keep output rates above 1 billion tons a year, despite a swath of production curbs aimed at reducing carbon emissions and reining in supply. Those measures have boosted steel prices and profitability at mills, allowing them to better accommodate higher iron ore costs and potentially front-load output ahead of more environmental restrictions.

Steelmakers in the rest of the world, such as ArcelorMittal SA, are also enjoying a boom as demand bounces back from pandemic lows.

“There is a chance that ex-China demand can come back to such an extent that we still see steel demand pick up globally and that will see iron ore demand remain at these elevated levels,” CBA’s Dhar said.

Traders will be watching closely for how China responds. Shipmakers and household-goods manufacturers will eventually be unable to withstand elevated steel prices, the country’s state-run Xinhua News Agency reported on Sunday, citing analysis from the China Iron & Steel Association. The report said it would be difficult for steel to continue rallying.

The government has scheduled nationwide inspections on steel-capacity cuts, with the National Development and Reform Commission calling on the state asset regulator and provincial level working groups to complete self-checks by May 15. Authorities will conduct on-site inspections in June and July, according to a statement Monday.