Private prison operators are rushing to shore up their finances after increasing political pressure regarding their treatment of inmates and immigrants cast doubts over the long-term prospects of their businesses.

CoreCivic Inc. is borrowing $400 million to refinance near-term debt, while Geo Group Inc. said it would suspend its quarterly dividend to prioritize debt repayment and begin a review of its corporate structure, according to separate statements Wednesday.

The companies, the two largest operators of private detention facilities in the U.S., are contending with the fallout from an executive order from President Joe Biden in January that instructed the Department of Justice not to renew contracts with private prison operators. They have also faced dwindling financing options after major banks announced they would no longer lend to the industry and suffered credit rating downgrades.

In spite of those challenges, new allies have recently emerged on Wall Street. Imperial Capital Group Inc. stepped in to lead CoreCivic’s bond offering Wednesday, which is the company’s first since 2017, while StoneX Group Inc. helped Geo arrange a convertible bond sale in February. The firm is also a joint bookrunner on CoreCivic’s new bond deal. 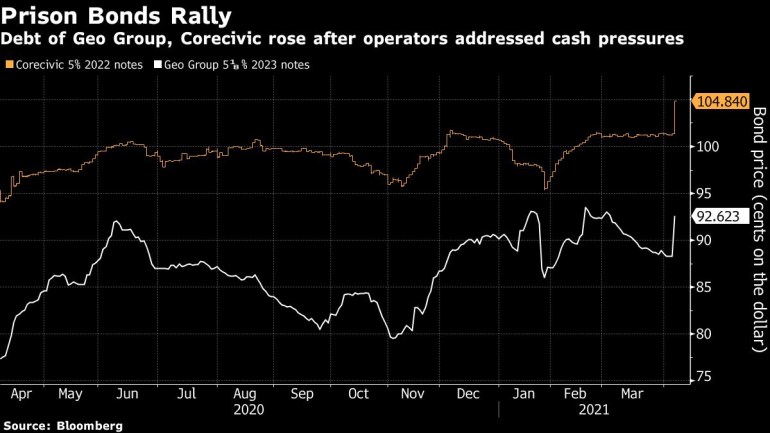 “It’s not like the business just disappears overnight, but it’s an operating environment where things seem to be changing,” said Joe Gomes, an analyst at Noble Capital Markets, adding that it’s unclear how the administration would make up for lost beds by not renewing the contracts. “Neither of the companies are quite sure exactly what the end game is.”

Representatives for CoreCivic and Imperial Capital did not respond to requests for comment. A representative for Geo declined to comment beyond the company’s statement on Wednesday, in which it said it aims to direct cash flows to repay debt and fund growth internally.

Private prison operators are also facing higher borrowing costs as money managers increasingly incorporate environmental, social and governance criteria into their investment selection. CoreCivic’s new notes, which will mature in 2026 and will not be callable for three years, may yield around 8.5%, according to a person with knowledge of the matter, who asked not to be identified because the details are private.

That’s more than two percentage points higher than the average yield on lowest-rated junk bonds, which dropped to an all-time low of 6.1% Tuesday. CoreCivic is in the BB bucket, where bonds on average yield about 3.2%, according to data compiled by Bloomberg.

The Biden order, which applies to the U.S. Federal Bureau of Prisons and the U.S. Marshals Service, affects contracts that accounted for roughly a quarter of Geo’s and CoreCivic’s revenues last year, according to S&P.

Geo’s stock dropped by more than 19% Wednesday to its lowest since 2006, while its bonds rallied as creditors took some comfort from the company’s decision to prioritize debt repayment and reduce leverage over shareholder payouts.

The company said it is also reviewing its corporate structure as a real estate investment trust, which brings tax advantages but requires minimum dividend distributions to equity holders each year. CoreCivic revoked its REIT structure last year and discontinued its dividend to pay down debt.

Pressure from lenders is a key motivation behind Geo considering the switch, according to people with knowledge of the matter. Bondholders have been encouraging the company to shore up finances to best manage its approximately $2.6 billion in long-term debt.

One group of such lenders has been reviewing its options with law firm Akin Gump Strauss Hauer & Feld, according to the people, who asked not to be identified citing private discussions. A representative for Akin Gump declined to comment.