The total market value of cryptocurrencies pushed past $2 trillion for the first time, doubling in about two months amid surging institutional demand.

Bitcoin, the largest of the more than 6,600 coins tracked by CoinGecko, is worth more than $1 trillion alone after its price more than doubled in 2021 to $58,858. The five next biggest coins — Ether, Binance Coin, Polkadot, Tether and Cardano — have a combined value of about $422 billion.

Bitcoin has been on a tear as institutional investors dabble in crypto as a way to boost returns on cash in a world of near-zero interest rates. Tesla Inc. poured $1 billion of its reserves into Bitcoin and began accepting it as payment for cars. Morgan Stanley is allowing some of its wealthiest clients to add the token to their portfolios, while firms from Mastercard Inc. to PayPal Inc. have taken steps to embrace Bitcoin. 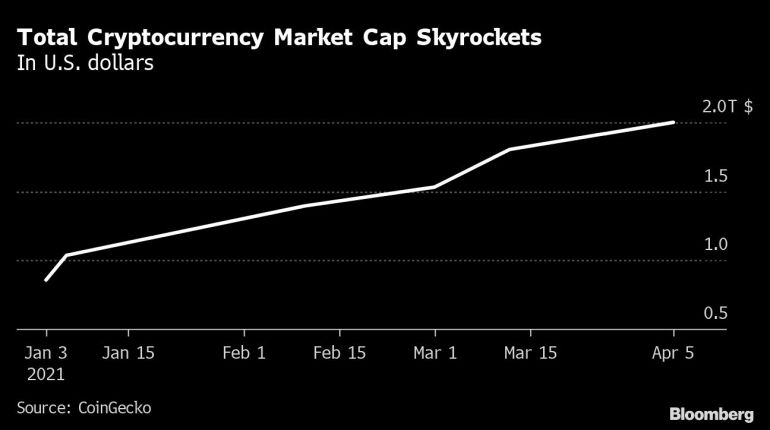 Bitcoin advanced Monday after Grayscale Bitcoin Trust — the world’s largest institutional holder of the cryptocurrency, with $34 billion under management — said it plans to convert the trust to an exchange-traded fund.