By Dana Hull and Gabrielle CoppolaBloomberg

Tesla Inc. earned record profit in the first quarter, sidestepped an industry chip shortage, improved its manufacturing and even made money off Bitcoin.

And yet shares of the EV maker fell as much as 4.3% in early trading Tuesday, a sign of the lofty expectations Tesla now contends with after an eightfold gain in the stock last year. Among the quibbles from analysts: Tesla didn’t offer a specific estimate for vehicle deliveries in 2021.

Chief Executive Officer Elon Musk is pushing to ramp up production and maintain Tesla’s dominance in the electric vehicle market, but competitors are moving in aggressively. Musk said Monday demand is higher than it’s ever been, but without more numbers to go on, investors shrugged.

“It’s all good, but there’s not a lot of news and it wasn’t a blowout,” said Gene Munster of Loup Ventures. “Everything happened that people thought would happen.”

Tesla pulled a new lever to juice earnings in the quarter, generating $101 million in income from selling about 10% of its Bitcoin holdings.

Profit from the cryptocurrency and the sale of regulatory credits and tax benefits contributed about 25 cents to Tesla’s adjusted earnings of 93 cents a share, allowing the carmaker to beat Wall Street’s 80-cent average estimate, Dan Levy, an analyst with Credit Suisse, wrote in a note Monday.

“We do believe long-term in the value of Bitcoin,” he said on a conference call. “It is our intent to hold what we have long-term and continue to accumulate Bitcoin from transactions from our customers as they purchase vehicles.”

Tesla disclosed its initial Bitcoin purchase earlier this year and also said it would accept it as a form of payment. The surprise announcement helped boost the credibility of crypto and spurred a rally.

Tesla’s results kick off a year in which the Palo Alto, California-based automaker will be expanding operations on three continents, including completing new factories in Austin, Texas, and near Berlin. Tesla reiterated that it expects 50% annual growth in deliveries “over a multi-year horizon.” That implies deliveries of about 750,000 cars this year.

The unchanged guidance let down some analysts and investors who hoped for more detail after a blowout first-quarter showing.

“Investors likely came away from the 1Q earnings call discouraged,” Jeffrey Osborne, an analyst at Cowen & Co. with a market perform rating on the stock, wrote Tuesday in a research note, citing “the lack of near-term catalysts.”

Tesla handed over almost 185,000 cars worldwide in the first three months of this year, despite a shortfall in supplies of semiconductors. It delivered almost half a million cars in 2020.

Tesla and other automakers have had to cope with strained supplies of chips and other materials, an unexpected headache that comes as they have been ramping up production to meet higher consumer demand amid the pandemic. Consultant AlixPartners has said the chip shortage could cost automakers $61 billion in lost sales this year.

“This is a huge problem,” Musk said on the call. “Q1 had one of the most difficult supply chain challenges that we’d ever experienced.”

The CEO said he expects shortages to continue to impact the company in the second and third quarters.

The EV leader faces a new wave of competition from several new models being launched this year by startups such as Amazon.com Inc.-backed Rivian Automotive Inc. and established automakers including General Motors Co. and Volkswagen AG.

Tesla sought to assure investors in its quarterly release by noting growing demand for EVs and its own efforts to rapidly expand production capacity. “As more OEMs join our mission by launching EVs, we believe consumer confidence in EVs continues to increase and more customers are willing to make the switch,” it said in a statement.

The company has routinely taken in more money selling those credits to other automakers than it earns from its core business of making and selling cars. That’s a potential issue for Tesla as established carmakers start to offer their own lineups of EVs — they may not need to buy as many credits in the future despite tightening carbon-emissions standards globally.

Tesla indicated it is getting better and more efficient at building cars. Its automotive gross margin of 26.5% came in above the Bloomberg consensus of 24.2%. The company attributed the boost to cost-cutting that outpaced lower average selling prices.

The carmaker contested concerns about a fatal crash involving a Model S in Texas earlier this month, saying it believes someone was in the driver’s seat at the time. That counters initial police comments that “no one” was driving, which had led to speculation that Autopilot, Tesla’s name for its driver-assistance system, was a possible factor in the crash.

“We were able to find that the steering wheel was indeed deformed, leading to the likelihood that someone was in the driver’s seat at the time of the crash,” Lars Moravy, Tesla’s vice president of vehicle engineering, said on the company’s earnings call.

The crash near Houston left two men dead and triggered probes by the National Highway Traffic Safety Administration and the National Transportation Safety Board. The company cautioned it hasn’t been able to retrieve all the data from the vehicle and said it’s working with federal regulators in their investigations. 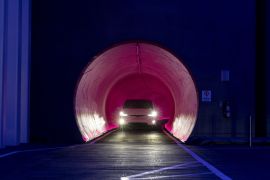 Both US projects are currently mired in a regulatory no-man’s land of environmental review and have yet to break ground. 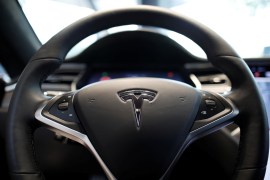 Crash of a Tesla Model S over the weekend heaped even more pessimism on to electric vehicle stocks. 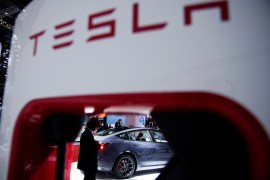 Video shows a woman in a T-shirt that says ‘The brakes don’t work’ shouting similar accusations at a Shanghai auto show. 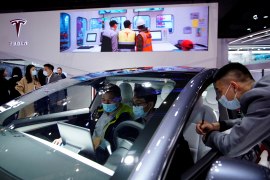