By Sam Kim and Jeong-Ho LeeBloomberg

South Koreans must learn how to work alongside machines if they want to thrive in a post-pandemic world where many jobs will be handled by artificial intelligence and robots, according to the country’s labor minister.

“Automation and AI will change South Korea faster than other countries,” Minister of Employment and Labor Lee Jae-kap said in an interview Tuesday. “Not all jobs may be replaced by machines, but it’s important to learn ways to work well with machines through training.”

While people will have to increase their adaptability to work in a fast-changing high-tech environment, policy makers will also need to play their part, Lee said. The government needs to provide support to enable workers to move from one sector of the economy to another in search of employment and find ways to increase the activity of women in the economy, he added. The minister’s remarks underline the determination of President Moon Jae-in’s government to press ahead with a growth strategy built around tech even if it risks alienating the country’s unions — an important base of support for the ruling camp — in the short term.

Capitalizing on the expertise of global technology giants such as Samsung Electronics Co., Korea is accelerating its efforts to transform itself into a resilient, tech-centric economy that can keep punching above its weight in key global supply chains through innovation while operating at full tilt even when another pandemic or similar crisis occurs.

“New jobs will be created as technology advances,” Lee said. “What’s important in policy is how to support a worker move from a fading sector to an emerging one.”

To help with the transition, the government is looking to expand its jobs insurance program to 21 million people, or more than 40% of the population, by 2025. The program is part of a government initiative to provide financial support in the form of insurance for every worker in the country, whether they are artists, freelancers or deliverymen on digital platforms.

Separately, the government is providing stipends for young people to encourage them to keep searching for work, as their struggle to stay employed amid slowing economic growth has been made tougher by the pandemic.

While Korea posted one of the smallest economic contractions in the virus-hit world last year, it wasn’t able to prevent a jump in job losses as multiple waves of the coronavirus struck the nation and forced the government to put restrictions on economic activity. The country shed jobs for almost a year until last month when employment rose due to the government’s job program and a low base.

Among the hardest hit groups were women in service sector jobs requiring face-to-face interaction also suffered. That sits at the heart of one of Korea’s biggest labor issues, the low participation rate of women in the work force, Lee said. The rate for women stands at 53% in South Korea, compared with 73% for men.

Youth unemployment remains a chronic issue for South Korea. The jobless rate among people in the 20’s stood at 8.6% last month, the highest among all age groups.

“I feel sorry for young people,” Lee said. “There were many jobs when the economy was growing fast, but now we live in a low-growth era. Nonetheless, we’re going to seek to provide income and training support to help them find the jobs they need.” 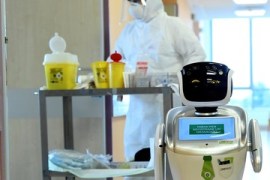 How robots are helping in the battle against COVID-19

While the human touch remains essential in times of crisis, robots are stepping in where people cannot. 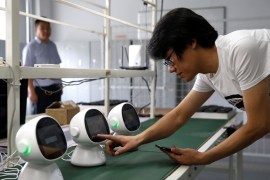 No ‘crystal ball’ for China’s robot startups amid virus fallout 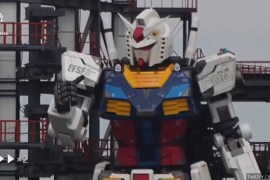 Gundam entrances millions as giant robot steps out in Yokohama

The 18-metre robot is the centrepiece of the Gundam Factory Yokohama, which is set to open in December. 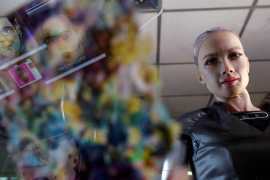