Women have dropped out of the U.S. workforce at a faster pace in states where most students are learning from home, risking a reversal of decades of gendered advancement.

Before the pandemic, the participation rate of mothers in the labor force was about 18 percentage points lower than fathers’. From 2019 to 2020, the gap widened by 5 points in states offering mostly remote instruction, and shrunk less where traditional school continued, according to a paper slated to publish soon in Gender and Society, a peer-reviewed academic journal.

The findings underscore one of the economic complexities — and potential long-term effects — of the school reopening debate that has divided parents, teachers and elected officials. While schools are increasingly returning to in-class learning as Covid-19 cases taper, more than half of students are still full or part-time remote. The issue affects mothers far more than fathers: The longer working women are home with their young kids, the greater the risks to their career growth — and to the broader economic recovery.

“The fear in the pandemic, in the context of parenthood, was that the added care giving burden as a result of school and daycare closures was going to land primarily on women’s shoulders” said Caitlyn Collins, an assistant professor of sociology at Washington University in St. Louis, and an author of the paper. “Unfortunately, that is exactly what research has found.”

Collins, along with her co-authors, built a dataset on school opening status of thousands of elementary schools across the country, and linked that data to federal labor statistics from the Current Population Survey of the U.S. Census and Bureau of Labor Statistics.

Researchers calculated labor rates for mothers and fathers with at least one elementary-age child. They compared the September through November time period in 2019 against 2020, controlling for race, age, marital status and education in 26 states, and honed in on three states: Maryland, where school was mostly remote; New York, which was a mix of remote and in-school; and Texas, where more than half of districts offered elementary students the option of full-time, in-person classes. 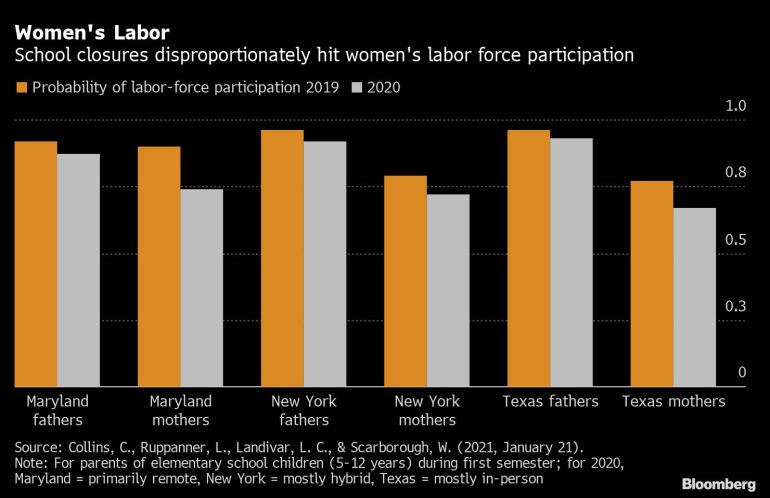 The gap was widest in Maryland. While fathers’ probability of working fell by 5 percentage points in 2020, the drop for mothers was 16 points.

More research is needed to understand the full impact of school closures, particularly the effects of hybrid setups, where trends were less clear. For example, New York, where half of districts opted for a hybrid program, saw a smaller hit to mothers’ predicted labor participation than Texas, which was mostly in-person — 7 points versus 10. Collins and her colleagues aim to run another round of analysis with a larger sample size of states.

Nationally, the gender gap grew most — and was statistically significant — in places similar to Maryland, where education was largely remote. Virginia, for example, saw an 11-point drop for mothers compared with a 2-point drop for fathers. States offering more traditional or hybrid saw insignificant changes to the gap. South Carolina, a hybrid state, saw fathers’ rates unchanged and mother’s rates drop just 3 points.

“In states where schools offer primarily remote instruction, this is having a really negative effect on mother’s labor force participation,” Collins said.

In normal times, about 70% of mothers living with their children typically work. After the pandemic struck, about 45% were not actively working. That number has since fallen to 35%. About 10 million mothers living with their school-age children were unemployed in January, roughly 1.4 million more than in the same period last year, according to the U.S. Census Bureau.

The patchwork of state and local policies has tied mothers’ career prospects to their addresses — and the whims of policy makers. About 47% of students were attending in-person school full time as of March 6, according to Burbio, a website that tracks school reopenings.

‘Hard to Go Back’

Kelly Mann of Raleigh, North Carolina, worked full time as an implementation manager for McGraw Hill in helping educators build online versions of their curricula. Business surged when the pandemic moved many schools to teaching virtually, but Mann found her children in need of added support to keep up with their own remote studies.

Mann gave notice she would leave her job over the summer. Without a second income, her family has made tough budget choices like foregoing extracurriculars.

“There are a lot of moms like me that are at an age where it’s going to be hard to go back,” said Mann, 48. “Career women that had fulfilling lives in addition to being mothers and wives are going to lose that.”

In Vancouver, Washington, Megan Gabriel, 36, worked full time as a nurse until the pandemic shuttered her clinic. Her two children are still in virtual school, preparing to switch to hybrid.

Her eldest, an eighth grader, developed mental-health issues from isolation that have demanded Gabriel’s time and care, preventing her from going back to her job. Opening schools earlier would have avoided that, she said: “I can’t imagine what looking for work will be like when schools finally do open back up.”