China is at least 30 years away from becoming a manufacturing nation of “great power”, according to a former industry minister, despite boasting the world’s most complete industrial supply chains.

In recent years, China has become the world’s top manufacturing nation, accounting for more than a third of global output, driven by domestic demand to produce everything from motor vehicles to industrial machinery. But its industries’ heavy dependence on US high-tech products such as semiconductors constituted a strategic weakness.

“Basic capabilities are still weak, core technologies are in the hands of others and the risk of ‘being hit in the throat’ and having ‘a slipped bike chain’ has significantly increased,” Miao Wei, who was Minister of Industry and Information Technology for 10 years before stepping down last year, said on Sunday.

As the Chinese economy pivots towards a services-based model and polluting smoke-stack factories are mothballed, manufacturing output as a share of the economy has declined. In 2020, manufacturing accounted for slightly more than a quarter of gross domestic product (GDP), the lowest since 2012.

“The ratio of manufacturing output to GDP has been declining too early and too quickly, which not only weighs on economic growth and affects employment, but also brings security loopholes to our industries and diminishes our economy’s ability to withstand risks, and its global competitiveness,” said Miao, now a member of the Chinese People’s Political Consultative Conference (CPPCC), the top advisory body to the government.

‘Big but not strong’

President Xi Jinping said in November that innovation in the manufacturing industry is far from adequate and firms need to tackle “bottleneck” technologies to become fully innovative.

“China’s manufacturing industry has made great achievements in recent years, but the situation of being ‘big but not strong’ and ‘comprehensive but not good’ has not been fundamentally changed,” Miao said in a speech to CPPCC delegates at the Great Hall of the People in Beijing.

There are many problems restricting the high-quality development of Chinese manufacturing but the most fundamental one is insufficient market-oriented reforms, Miao said.

While the tax burden on companies remains heavy and financial support of the manufacturing sector needs strengthening urgently, a shortage of innovative and high-tech talent has also significantly constrained development of the sector, Miao added.

“We must maintain our strategic resolve, stay clear-headed and deeply understand the gaps and deficiencies.” 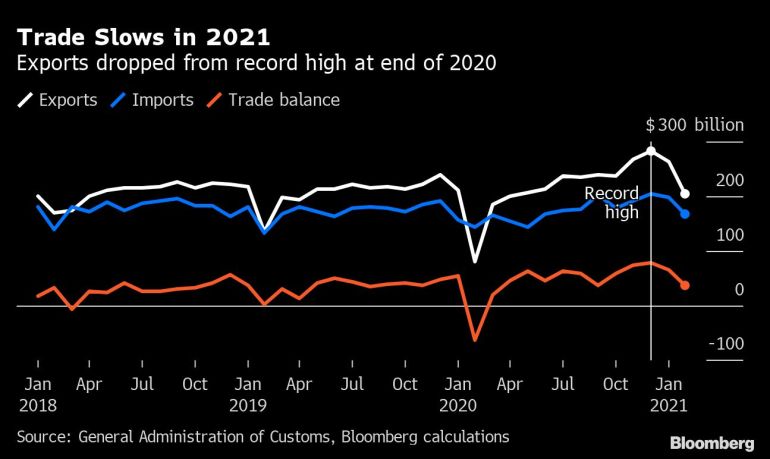 Miao’s comments coincided with data from the General Administration of Customs showing that China’s exports surged in the first two months of the year, reflecting strong global demand for manufactured goods and with figures partly skewed by the low base in 2020 when the economy was in lockdown.

Exports jumped 60.6 percent in dollar terms in the January-February period from a year earlier, well above the 40 percent median estimate in a Bloomberg survey of economists. In February alone, exports more than doubled from last year.

However, in the longer term, “we see uncertainty for exports in the second half of the year as external demand for working-from-home and anti-epidemic goods may start to slow, alongside the pandemic staying in check. In addition, more export economies would return to the market, potentially leading to more intensive competition in global markets,” David Qu, a China economist told Bloomberg.

The value of exports declined to almost $205bn in February, likely due to the Lunar New Year holiday. However, that was still 155 percent higher than shipments in the same month in 2020, when China was in lockdown to contain the first outbreak of COVID-19.