A 20% drop from its all-time high has left Cathie Wood’s flagship exchange-traded fund with the slenderest of gains for 2021. That looked increasingly at risk on Thursday.

The Ark Innovation ETF (ticker ARKK) fell 5.2% at 10:18 a.m. in New York. Assuming that drop holds it will easily see the $22.9 billion fund erase all of its price advance for the year – the latest marker on the way down for what is still one of Wall Street’s hottest products.

ARKK has been caught up in a selloff across pricey parts of the market, in particular the tech sector, as inflation fears grow and bond yields rise. ARKK’s largest holding, Tesla Inc., turned lower on Thursday following a steep drop a day earlier. Among some of the fund’s other big investments Square Inc. slumped 7% and Roku Inc. fell 4.9%.

“In a low growth world where rates are low, inflation expectations are low and GDP growth is low, those types of companies have done well,” said Ross Mayfield, investment strategy analyst at Baird, about ARKK’s holdings. “When bond yields spike, when economically sensitive areas of the market like energy and financials are outperforming, those are the kinds of companies that are first in line to take it on the chin.” 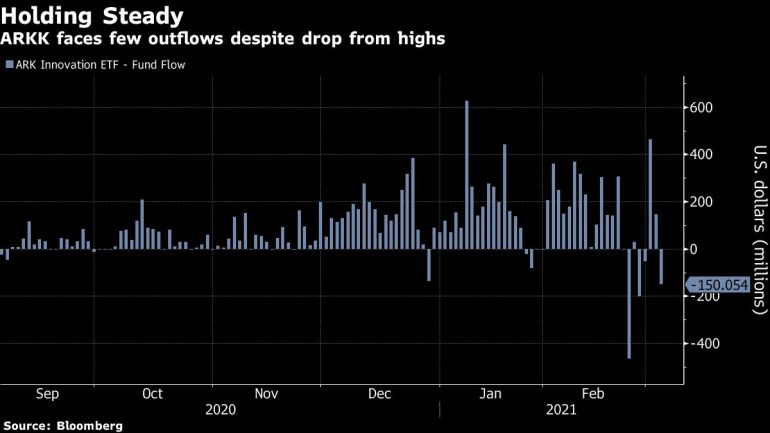 Even with the recent drop, ARKK’s performance over the past year is still remarkable by almost any measure. The fund is up more than 240% since its March lows almost 12 months ago, and assets have ballooned from $1.5 billion.

ARKK and the $7.8 billion Ark Next Generation Internet ETF (ARKW) remain two of the best-performing funds in America’s $5.8 billion ETF industry, according to data from Bloomberg Intelligence.

For the most part, investors have held steady during ARKK’s selloff, with a combined $611 million added to the fund in Friday and Monday trading. That’s offset the $150 million pulled on Tuesday, the latest day for which data is available.

“After the impressive 2020 and continued gains in 2021, some digestion is to be expected given ARKK’s focus on high growth companies,” said Todd Rosenbluth, head of ETF & mutual fund research at CFRA Research. “It will be interesting to see if investors show relative patience when down days occur.”

–With assistance from Kamaron Leach.