Saudi Arabia is prepared to support extending oil cuts by OPEC and allies into May and June and is also ready to extend its own voluntary cuts to boost oil prices amid a new wave of coronavirus lockdowns, the Reuters news agency reported, citing a source briefed on the matter.

With oil prices making steady gains earlier this year, the Organization of Petroleum Exporting Countries and allies, known as OPEC+, had hoped to ease output cuts.

But last week, four OPEC+ sources told Reuters a fresh wave of lockdowns would most likely encourage the group to extend cuts into May when it meets on Thursday.

On Monday, the source said Saudi Arabia was keen to extend cuts into June.

“They don’t see demand as yet strong enough and want to prevent prices from falling,” the source said. The Saudi energy ministry did not respond to a request for comment.

OPEC and its partners will consider on Thursday whether to revive part of the 8 million barrels of daily output – about 8 percent of global supply – it is withholding while fuel demand remains depressed.

The cartel’s intervention has helped to boost crude prices more than 20 percent this year – even as the economic ravages of the pandemic continued – shoring up revenues both for its members and a beleaguered global oil industry.

The cuts involve OPEC, led by Saudi Arabia, as well as non-OPEC producers led by Russia. Together, their cuts currently stand at slightly more than 7 million barrels per day (bpd) plus an additional 1 million bpd voluntary reduction by Saudi Arabia. 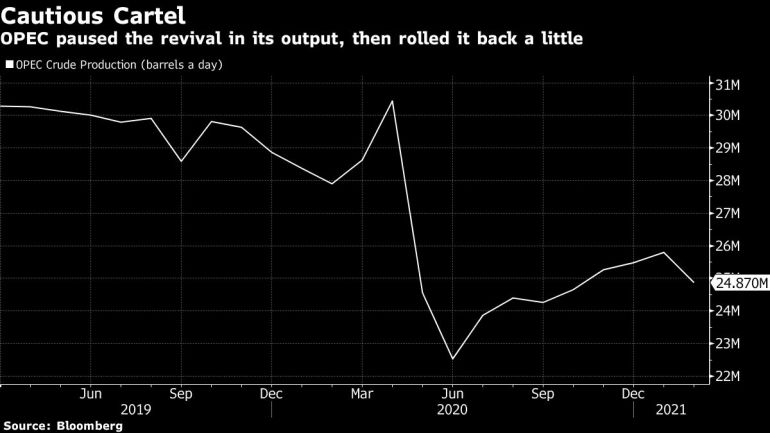 With oil prices still significantly below the levels many OPEC nations need to cover government spending, delegates say the coalition is expected to again tread carefully on Thursday.

OPEC+ had already surprised the market on March 4 by deciding to hold output broadly steady. Russia and Kazakhstan were allowed to raise production slightly.

A source familiar with Russia’s thinking said on Monday that Moscow would support extending cuts again while seeking a new small output hike for itself.

Russia’s government does not face the same fiscal need for high prices as the Saudis, so giving it the leeway to pump a little bit more while other nations maintain their restraint is seen as the price Riyadh must pay to ensure Moscow’s continuing cooperation, said Bjarne Schieldrop, chief commodities analyst at SEB AB.

Industry benchmark Brent crude futures, which this month reached their highest since before the pandemic at $71 a barrel, have since fallen to about $65.

Another reason for caution by oil producers is rising Iranian crude exports, which have also weighed on prices. Iran has managed to boost shipments in recent months despite US sanctions.

An output increase from the wider 23-nation coalition is more likely later in the year. Oil demand is on the mend in the US, the biggest consumer, and already above pre-virus levels in China, the next-largest.

With the vaccine rollout poised to allow economies to return to normal and accelerate consumption further, OPEC forecasts that the surplus of oil stockpiles accumulated during the depths of the pandemic will clear in the next few months. Long-term price gauges in futures contracts signal that inventories will tighten sharply in the second half of the year.

Riyadh and its partners could also face a little more urgency to restore idle production if legislation introduced in the US Senate last week to penalise OPEC for “price fixing” becomes law. But such a turning point does not seem to have arrived yet.