The United States and the United Kingdom on Thursday imposed sanctions on conglomerates controlled by Myanmar’s military, following the generals’ February 1 coup and deadly crackdown, with Washington calling the move a response to “abhorrent violence and abuses”.

Representatives for the two entities, which control large sectors of the Myanmar economy, had no immediate comment.

Dr Sasa, of the Committee Representing Phyidaugsu Hluttaw (CRPH) civilian government, said he was “delighted and grateful” at the US and British action.

“The two holding companies, MEC and MEHL, have for many years been the means by which the military generals have plundered our nation’s riches and wealth for their own advantage,” he said in a statement. “They continue to use this wealth to kill, destroy and wipe out the people of Myanmar.”

The US Embassy laid a wreath for slain anti-regime protesters on Mar. 26 in front of a high school in Hledan in Yangon’s Kamayut Township. Around 30 minutes later, police arrived and took away the wreath. (Photo: CJ)

Thursday’s actions are the most significant by far against the Myanmar military’s sprawling business empire, through which it makes money dominating industries such as brewing, tobacco and mining .

Shortly after the announcement, the US State Department condemned the continued use of lethal force by authorities in Myanmar over the weekend that resulted in the deaths of at least 27 people, including several children.

“These abhorrent and brutal acts against children, one as young as seven years old who was shot and killed in her home while sitting on her father’s lap, further demonstrate the horrific nature of the Burmese military regime’s assault on its own people,” State Department spokesman Ned Price said in a statement.

Washington’s move freezes any assets held by the conglomerates in the US and is the latest in a series of sanctions following the military takeover that have targeted Myanmar’s central bank as well as top generals.

The designation prohibits US companies or citizens from trading or conducting financial transactions with those listed.

Since almost all dollar payments clear through US financial institutions, the move effectively kicks blacklisted companies out of the US banking system.

US Secretary of State Antony Blinken said the Myanmar military “have taken increasingly disturbing actions aimed at their own citizens since February 1”.

“These actions will specifically target those who led the coup, the economic interests of the military, and the funding streams supporting the Burmese military’s brutal repression,” he said. “They are not directed at the people of Burma.

“The United States and the UK have shown that we will follow through on our pledges to promote accountability for the coup and the abhorrent violence and other abuses we have seen in recent weeks,” Blinken said.

Civil society and Myanmar activists have long called for sanctions on the conglomerates, stepping up their campaign following the brutal army-led crackdown in Rakhine in 2017, which sent hundreds of thousands of mostly Muslim Rohingya fleeing into neighbouring Bangladesh.

“This is an important step in cutting off key sources of funding to the military regime,” Paul Donowitz, Myanmar Campaign Leader at Global Witness said in a statement. “MEHL and MEC provide vast amounts of revenues to the military, helping to enable its illegitimate power grab and fund its abuses against the people of Myanmar.”

At a US Senate hearing, Senator Ed Markey, Democratic chairman of the Asia subcommittee, said he welcomed the latest sanctions but called for more.

“More must be done to deny the army its economic lifeline and to deny it the weapons of war. The United States should play a leading role in urging our partners and allies, including members of ASEAN, to take steps to cut off funding for the military,” he said, referring to the Association of Southeast Asian Nations.

Human Rights Watch (HRW) said the sanctions would create significant difficulties for the conglomerates in doing business with outside companies.

“This is a very important step, but it is not the biggest economic sanction that could be implemented,” said HRW’s Asia advocacy director, John Sifton, adding that Washington should also target Myanmar’s revenues from natural gas joint ventures with international companies.

Global Witness urged the European Union to also impose sanctions on the military’s business interests and said the UK should follow the US in targeting MEC. Myanmar’s Civil Disobedience Movement also called on countries to impose a global arms embargo against the Myanmar military. 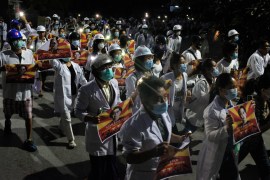 Myanmar doctors kick off day of protests with dawn march

The rising death toll in Myanmar forces anti-coup protesters to turn to novel ways to show their opposition. 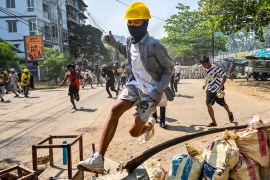 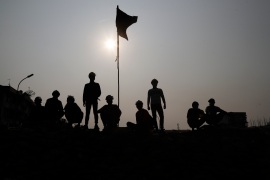