India has set in motion the biggest ever auction of coal mines in the country despite the fossil fuel’s key role in contributing to global warming.

The country will put 67 mines on the block, the most in a single auction. Winners will be allowed to produce and sell the fuel, a reform meant to dislodge state monopoly over the domestic coal market and open it up to private firms. The deadline for submitting technical bids is May 27 and electronic auctions have been scheduled from June 28 to July 28, the coal ministry said on Thursday.

The auction sends mixed signals at a time when the world’s third-biggest emitter of greenhouse gases needs to shed its dependence on coal. India is under growing pressure to improve its climate commitments, which have forced government officials to debate a possible net-zero emissions target. The country is one of the most vulnerable to climate impacts, and coal mining and burning also contributes to deadly air pollution.

To be sure, the country has set aggressive goals to expand its renewable power portfolio, but coal still accounts for around 65% of its electricity generation. That share is declining though.

“India can’t just stop using coal overnight, it will take a decade or two to do that,” according to Tim Buckley, director of energy finance studies for Australia and South Asia at the Institute for Energy Economics and Financial Analysis, or IEEFA. “It’s still a necessary evil for the country for the medium term.” 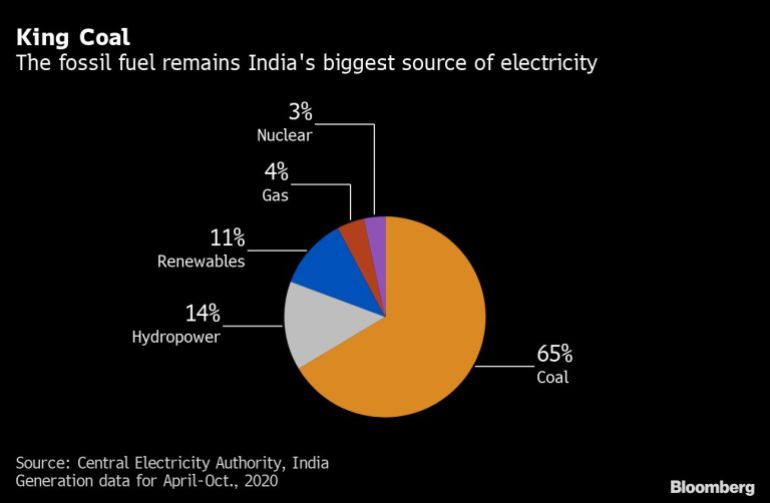 The government also sees private coal mining as a way to create jobs in an economy devastated by the pandemic. Mining projects will bring in new investments and boost socio-economic development in mining regions, according to the ministry’s statement.

“In this tranche of auction special emphasis has been given on protection of the environment,” the coal ministry’s statement said Thursday. “Coal blocks have been selected in those areas where forest cover is low, coal quality is good, mines are close to the infrastructure facilities and resettlement and rehabilitation has to be done at the minimum.”

The government began liberalization of the coal market last year. But after opposition from some states and a lack of investor interest, it whittled down the list of mines to be auctioned from 41 to 19. As the government prepared for the bids then, United Nations’ Secretary-General Antonio Guterres cautioned against investments in fossil fuels, calling such projects “a human disaster and bad economics.”