New Zealand’s government took aim at property speculators with a suite of new measures to tackle runaway house prices and prevent the formation of a “dangerous” bubble.

“The last thing home owners need right now is a dangerous housing bubble, but a number of indicators point towards that risk,” Ardern told a news conference. “Property investors are now the biggest share of buyers, with the highest amount of purchases on record. Last year, 15,000 people bought homes who already owned five or more.” 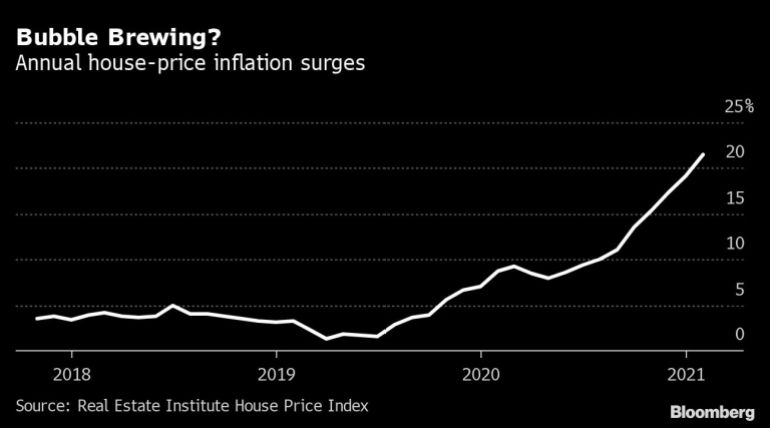 New Zealand’s success in battling Covid-19 has seen its economy recover sooner than many others, putting it at the forefront of a global property boom as ultra-loose monetary policies encourage investment in higher-yielding assets. House prices surged 21.5% in the year through February and investors accounted for more than 40% of purchases that month, a record high.

To dissuade speculation, the government will phase out the ability of investors to claim mortgage interest as a tax-deductible expense. It will extend of the period in which profits on the sale of investment property are taxed to 10 years from five.

The New Zealand dollar fell on the news and bought 71.20 U.S. cents at 1.26 p.m. in Wellington, down from 71.70 cents beforehand. Swap rates and bond yields also declined as traders speculated the central bank will be able to keep interest rates at a record low for longer.

The package is the latest salvo in Ardern’s assault on the booming property market, which is undermining her efforts to reduce inequality. Prices are soaring at double-digit rates around the country, taking the national median to NZ$780,000 ($556,000). In Auckland, the median price has reached NZ$1.1 million, making it the fourth least affordable city in the world, according to Demographia.

Last month, Finance Minister Grant Robertson announced changes that he said will require the Reserve Bank to pay more attention to the property market when setting monetary and financial policy. He also asked the RBNZ to consider restrictions on interest-only mortgages and the introduction of debt-to-income ratios for investors. The bank is due to report back in May.

Robertson said today that New Zealand’s housing market has become the least affordable in the OECD and it was “essential the government takes steps to curb rampant speculation.”

He said extending to 10 years the so-called “bright-line” test — effectively a capital gains tax on investment property sales — and removing interest deductibility for investors “will dampen speculative demand and tilt the balance towards first home buyers.”

The new bright-line test will apply to properties bought from March 27. The time horizon for new builds will remain at five years to encourage supply.

From Oct. 1, investors won’t be able to deduct mortgage interest as an expense on properties acquired from March 27. For existing property owners, mortgage interest deductibility will be phased out over the coming four years so that it can’t be claimed at all by the 2025-26 tax year. New builds are expected to be exempted from this change.

The government is trying to curb housing demand while also increasing supply, which has been constrained by a raft of factors including planning rules and high construction costs. It said today it will establish a NZ$3.8 billion fund to unlock more land for housing development, and also make first home grants available to more people.