Carmaker Volkswagen (VW) plans to cut up to 4,000 jobs at its plants in Germany by offering early or partial retirement to older employees in a move that could cost several hundred million euros, the Reuters news agency reported on Sunday citing company sources.

Volkswagen said in a statement it has agreed on a plan with worker representatives to make partial retirement available to those born in 1964, while offering early retirement to those born from 1956 to 1960.

Volkswagen said it expected up to 900 workers to opt for early retirement, while a number in the low thousands would choose partial retirement, without giving a precise figure.

Two company sources told Reuters that 3,000-4,000 positions would be cut in connection with the programme to be implemented at the six German plants of the main VW brand, which now employ about 120,000 people.

Handelsblatt newspaper, which earlier reported on the plan, had said the company would cut up to 5,000 jobs.

Volkswagen declined to comment on the cost, which will depend on how many employees accept the offer. One source estimated it at close to 500 million euros ($598m).

As the 83-year old firm tries to become more of a tech company modelled on electric carmaker Tesla, Volkswagen said it was raising its training budget by 40 million euros ($47.8m) to 200 million euros ($238.9m). 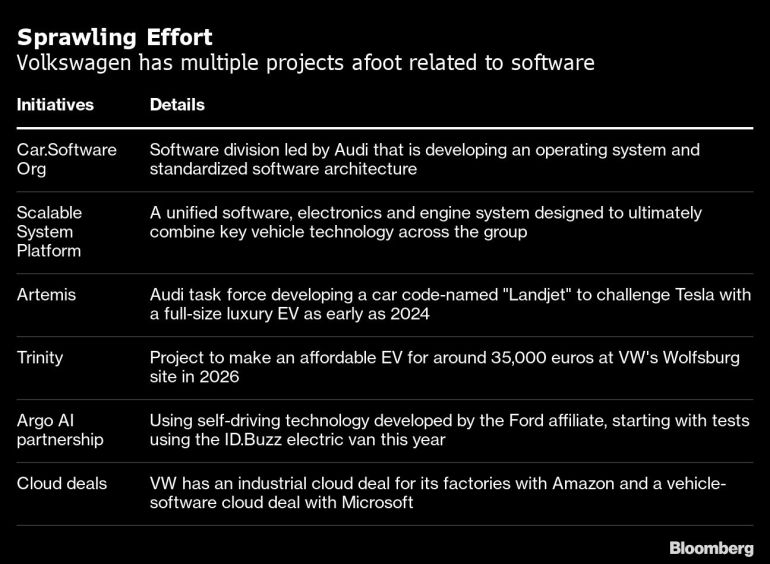 VW has set a target of boosting the share of its software that is developed in-house to 60 percent from 10 percent currently. To pull this off, it established a unit – dubbed Car.Software Org – with about 4,000 employees to develop a system that can manage vehicle data flows and connect them to the cloud.

In its latest five-year investment plan, the company doubled spending on digitalisation efforts to 27 billion euros ($32bn), even as the overall budget remained flat. While that represents significant resources, Google parent Alphabet spends almost that much in a year.

Volkswagen said it was also extending a hiring freeze until the end of 2021. It had been due to stay in place until the first quarter. External hires can only be made in areas such as electric cars, digitalisation and battery cell development.

The Volkswagen Group said in January it would cut overhead costs by 5 percent and procurement costs by 7 percent over the next two years.