President Joe Biden gave his strongest indication yet that he will push for his $1.9 trillion Covid relief plan without Republican support, saying that a weak jobs report shows the risk of doing “too little.”

“If I have to choose between getting help right now to Americans who are hurting so badly and getting bogged down in a lengthy negotiation — or compromising on a bill that’s up to the crisis — that’s an easy choice,” Biden said in remarks Friday at the White House. “I’m going to act and I’m going to act fast.”

Biden’s outreach to Republicans, including hosting a meeting at the White House with a group of 10 earlier this week, failed to win backing for his go-big stimulus. His comments Friday were his harshest criticism yet of Republican counterproposals, and a clear indication that the White House is girding for what could be a party-line vote to pass his package.

Biden spoke hours after a report showed private-sector payrolls barely grew in January, with the restaurant and lodging sector logging almost 600,000 in job losses over the past two months. While the jobless rate dipped to 6.3%, that was partly because some Americans gave up looking for work. 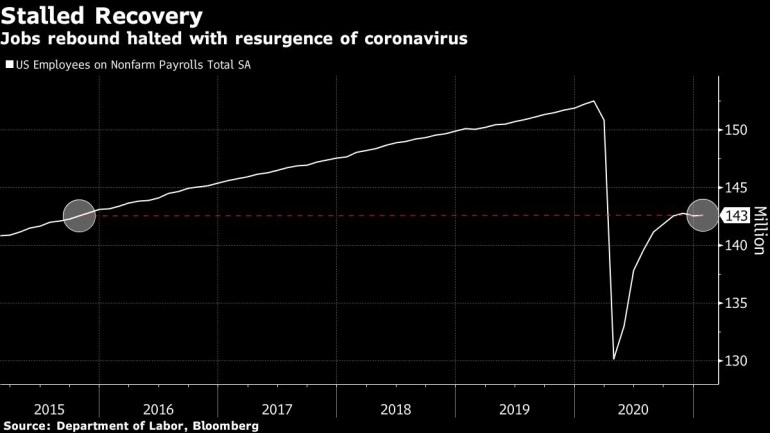 “Some in Congress think we’ve already done enough to deal with the crisis in the country. Others think that things are getting better and we can afford to sit back and either do little or nothing at all,” Biden said. “That’s not what I see. I see enormous pain.”

Biden’s Covid package took a major step forward with an early morning vote in the Senate along party lines that showcased the Democrats’ ability to proceed on a bill without Republican support. The president later met to talk strategy with House Speaker Nancy Pelosi and the chairs of key House committees working to draft the rescue plan.

Expectations for stimulus helped investors look past the Labor Department’s report, which also showed total employment down almost 10 million compared with the pre-pandemic peak. The S&P 500 Index headed for a record close on Friday, up 0.6% as of 12:56 p.m.

Still, Pelosi and Senate Majority Leader Chuck Schumer will need to hold their caucuses together amid calls from moderates to split off vaccine funding, which has bipartisan support.

Biden’s plan is second in size only to the $2 trillion Cares Act approved last March, when the first blow from Covid-19 walloped both the nation’s economy and financial markets. The price tag of the new package has spurred opposition from Republicans, with even some Democrats warning that it could limit the space to maneuver on other priorities later in the year.

Larry Summers, who served as President Barack Obama’s top economic adviser during the last crisis, warned of putting so much stimulus in the pipeline that “we have an economy that is literally on fire.” Biden’s rescue plan is six times as large, relative to the size of the economic hit, as the Obama administration’s recovery program, he said in an interview with Bloomberg TV this week.

Unless longer-term initiatives on infrastructure and climate change are funded with tax hikes, “we’re using up an enormous amount of fiscal space, an enormous amount of political and economic energy on measures that are not building back better,” said Summers, a paid contributor to Bloomberg.

Biden rejected the idea of going smaller, however, drawing on lessons from the last crisis.

“One thing we learned is we can’t do too much here,” the president said Friday. “We can do too little and sputter.”

Friday’s weak employment report gave the administration’s argument a boost. Nonfarm payrolls disappointed for the second consecutive month, increasing by 49,000 — below the median 105,000 estimate in a Bloomberg survey of economists.

“The numbers that we got this morning really do underscore the cost of inaction,” Biden economic adviser Heather Boushey said on Bloomberg Television.

House and Senate committees have until Feb. 16 to write the stimulus legislation under the budget instructions approved in the Senate early Friday. The House is set to take up the Senate’s budget resolution later in the day, clearing that path.

Friday morning’s budget vote in the Senate — during which Vice President Kamala Harris provided the tie-breaking vote — allows Democrats in the upper chamber to bypass the 60-vote filibuster requirement and instead pass legislation along party lines. The White House has said they still hope to court Republican support for the package, but their priority is quickly passing a bill large enough to address the economic crisis.

Pelosi told reporters that she hopes the House will approve the relief bill and send it to the Senate in about two weeks. She said the stimulus will “absolutely without any question” be enacted by March 15 — the date by which expanded and extended unemployment benefits from the December relief bill will have expired.

Republicans have proposed scaling back Biden’s proposals for additional funding to help schools reopen, and have said that $1,400 stimulus checks advocated by the White House should be smaller and go to fewer people. GOP lawmakers have also objected to Biden’s proposed $15 hourly minimum wage hike as part of the bill.