Sales of new U.S. homes rose in January by more than forecast to a three-month high as buyers took advantage of attractive mortgage rates that are now starting to increase.

Purchases of new single-family homes increased 4.3% to a 923,000 annualized pace in January from an upwardly revised 885,000 rate in the prior month, government data showed Wednesday. The median forecast called for an 856,000 pace. 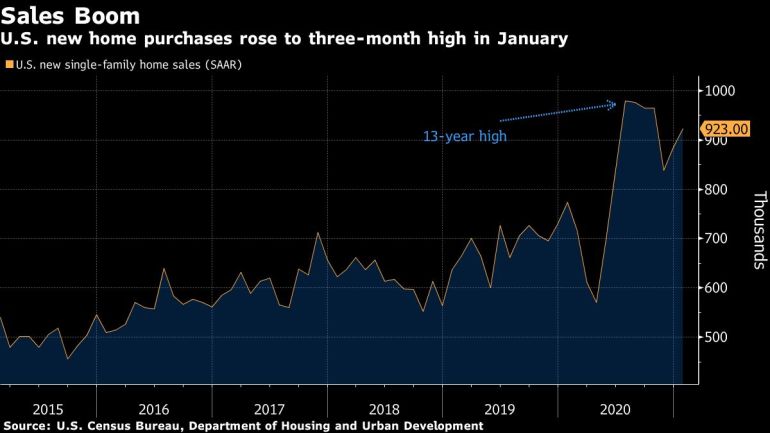 Historically-low mortgage rates helped fuel a housing boom last year when many Americans sought more space, with homes serving as offices and classrooms during the pandemic. The demand surge has left inventories lean and driven up prices, threatening to cool momentum just as borrowing costs begin to ratchet higher.

At the same time, builder backlogs remain elevated and indicate residential construction will stay firm in coming months and contribute to economic growth.

A report earlier Wednesday from the Mortgage Bankers Association showed loan applications to purchase homes declined last week to a nine-month low against a backdrop of rising mortgage rates and soaring prices. On Tuesday, a gauge of December home prices in 20 cities posted the largest year-over-year gain since 2014.

Other data suggest the current strength can continue in the months ahead. While housing starts last month were softer than expected, applications to build single-family homes rose to the highest since 2006. Meanwhile, the number of one-family residential projects authorized but not yet started climbed to the highest in more than 13 years.

At the current sales pace, it would take four months to exhaust the supply of new homes, according to today’s data.

The report is published jointly by the U.S. Census Bureau and the Department of Housing and Urban Development.