By Paul Jarvis and Bailey LipschultzBloomberg

GameStop Corp.’s rally fizzled further Tuesday, meaning the stock has now given up almost 80% of the spectacular gains that were fueled by last month’s attack on short sellers from Reddit day traders.

The stock tumbled to $104 at 9:44 a.m. in New York, after triggering its first volatility pause of the day. The video-game retailer’s market value has dwindled by $26 billion to $7.4 billion from a Thursday intraday peak, though the stock is still up almost 500% year-to-date.

GameStop’s retreat has coincided with a sharp reduction in short interest after bearish investors appeared to cover their positions. That has loosened a squeeze on the stock caused by day traders who used Reddit forums to tout and bid up out-of-favor stocks that also included movie-theater chain AMC Entertainment Holdings Inc. and American Airlines Group Inc.

“It looks like the unwind of the short squeeze, where prices will start to reflect economic reality again,” said Maarten Geerdink, head of European equities at NN Investment Partners. 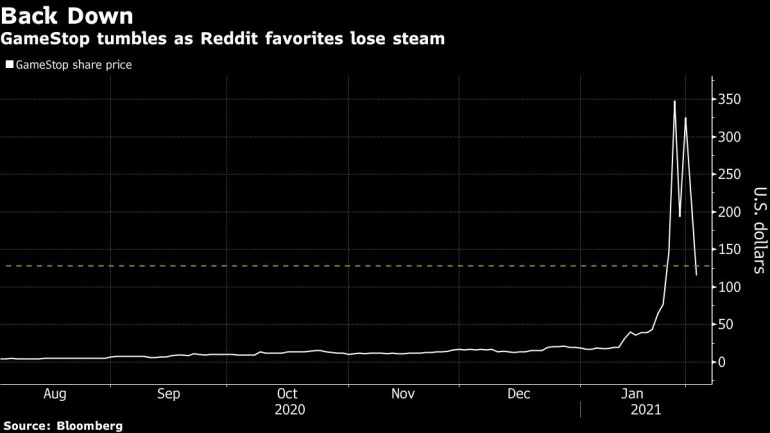 Other stocks recently favored by the Reddit community are also rapidly losing steam: AMC tumbled 42% and at $8 is more than 50% below last week’s intraday high. Express Inc. declined 29% and has lost about 70% of its value since peaking on Wednesday.

The declines come as short sellers reduce their interest, having sustained multi-billion dollar losses. The short interest in GameStop shares has tumbled to 36% of its freefloat, according to data from IHS Markit. 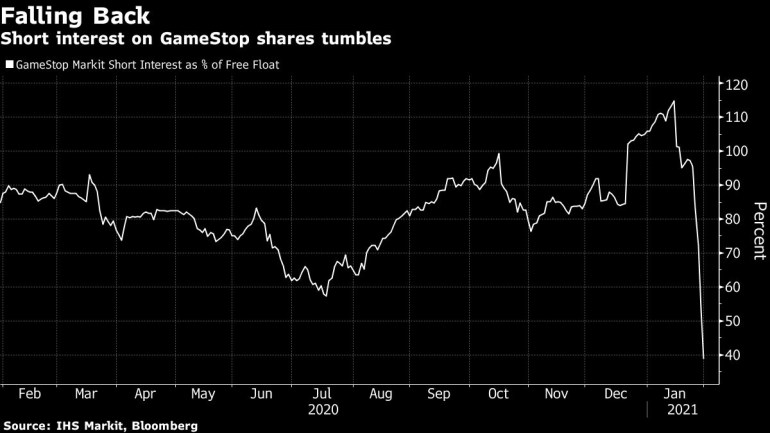 Tuesday’s drop came despite a loosening of restrictions on the amount of shares investors can buy using Robinhood Markets Inc. On Monday afternoon, the popular trading app started allowing users to purchase up to 20 shares of GameStop, up from a cap of one before the market opened.

The lower number of shares sold short could also deal a blow to day traders’ thesis that a higher stock price would only result in more gains as hedge funds who bet against the Grapevine, Texas-based company would need to cover their shorts.

Backlash against short-sellers including Citron Research had been a key rallying point for retail traders using Reddit to communicate about their bets. The mania spread to companies like AMC Entertainment, which saw record volatility as trading volumes soared last week.

“The markets can be very irrational in the short term, but at some point we do believe that in the medium to long term, the market gets back to trading closer to the fundamentals,” Samy Chaar, chief economist at Banque Lombard Odier & Cie SA, said. “If these stocks are in the end not companies that will generate a visible quality trend of profits, then investors that want to buy them at some point will shrink.