Bitcoin jumped to a record high after Mastercard Inc. and Bank of New York Mellon Corp. moved to make it easier for customers to use cryptocurrencies.

The largest digital asset rose as much as 7.4% to $48,364, surpassing the all-time high reached Monday after Tesla Inc. announced it would hold $1.5 billion of the cryptocurrency on its balance sheet. The wider Bloomberg Galaxy Crypto Index also touched a record.

“The crypto-asset world is bursting into the realms of traditional finance at a staggering pace,” said Simon Peters, an analyst at investment platform eToro.

Mastercard singled out so-called “stablecoins,” which often peg their value to that of another asset, such as the U.S. dollar. Mastercard has already partnered with crypto card providers such as Wirex and BitPay, but has required digital currencies to be converted into fiat before processing payments for transactions on its network.

Bank of New York Mellon Corp. said Thursday it will hold, transfer and issue Bitcoin and other cryptocurrencies for institutional customers. 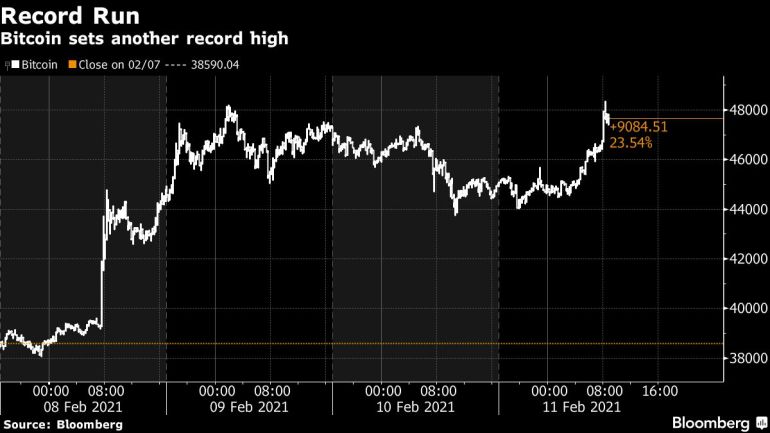 Interest in cryptocurrencies has accelerated yet again as Tesla CEO Elon Musk, the world’s richest person, emerged as a central figure for the crypto faithful, supporting arguments among proponents that Wall Street and the mainstream are becoming more receptive to the asset class. Detractors maintain speculators are behind Bitcoin’s rise and the bubble will once again burst.

Even before announcing Tesla’s bet on Bitcoin, Musk said he was a supporter of Bitcoin on a social audio app and made multiple tongue-in-cheek references on Twitter to Dogecoin — a Shiba Inu-themed crypto started as a joke — sending prices soaring.

Mastercard is also “actively engaging” with central banks around the world on their plans to launch new digital currencies, the company said in a blog post on Wednesday.

Twitter Inc. has also done some “upfront thinking” around how to handle Bitcoin, including if employees and vendors ask to be paid in the cryptocurrency and whether the firm needs to have the digital asset on its balance sheet, CFO Ned Segal said in an interview on CNBC.

While Tesla’s investment of $1.5 billion put the focus on whether more companies will buy Bitcoin, the purchase is a drop in the ocean compared to the holdings of America’s blue-chip corporates. The purchase is worth just 0.05% of about $2.79 trillion of cash and cash-equivalents held on the balance sheets of S&P 500 members, according to data compiled by Bloomberg.

Wall Street Bets, the popular Reddit forum at the center of the retail investor frenzy, is talking about cryptocurrencies as well. The unverified Twitter account “Wallstreetbets mod” posted a call to buy Bitcoin and marijuana stocks.