Deliberate attacks on nuclear reactors may seem almost unthinkable – unless the reactor is located in the Middle East, a region that has the dubious distinction of being the only place on the planet where aerial assaults on nuclear facilities are known to have happened.

As debate intensifies in the wake of the United Nations Climate Change Conference (COP26) over what role nuclear energy should play in global decarbonisation efforts, a new report published on Wednesday brings to light the radiological fallout and subsequent evacuations that could result if a state-of-the-art missile or drone successfully attacks an existing or planned commercial nuclear power plant in the Middle East.

Produced by the Nonproliferation Policy Education Center (NPEC), a Washington, DC-based research institute, the study offers a rare publically available analysis of conflict risks to nuclear facilities in the Middle East, warning that a successful strike on a commercial nuclear power plant there “could result in the evacuation of millions of people, many of whom would not be able to return to their homes for several decades”.

“Building large, vulnerable power reactors in the Middle East is a pretty weird way to hug Mother Earth,” NPEC Director Henry Sokolski told Al Jazeera. “It was time to spell out what the implications [of a successful missile attack] would be in a place like the Middle East, which is clearly entertaining building and operating more nuclear plants.”

“I think it is absolutely critical that people and communities are made aware of the very great risk involved in building nuclear [power plants] in an area of high potential conflict risk,” Paul Dorfman, an associate fellow at the Sussex Energy Group at the University of Sussex, told Al Jazeera.

The map below, for example, illustrates four current and planned commercial nuclear power plants and the evacuation footprints – including in surrounding countries – that could follow a successful aerial assault on a densely packed spent fuel pool, where discarded radioactive fuel rods are cooled before being moved to more permanent storage. 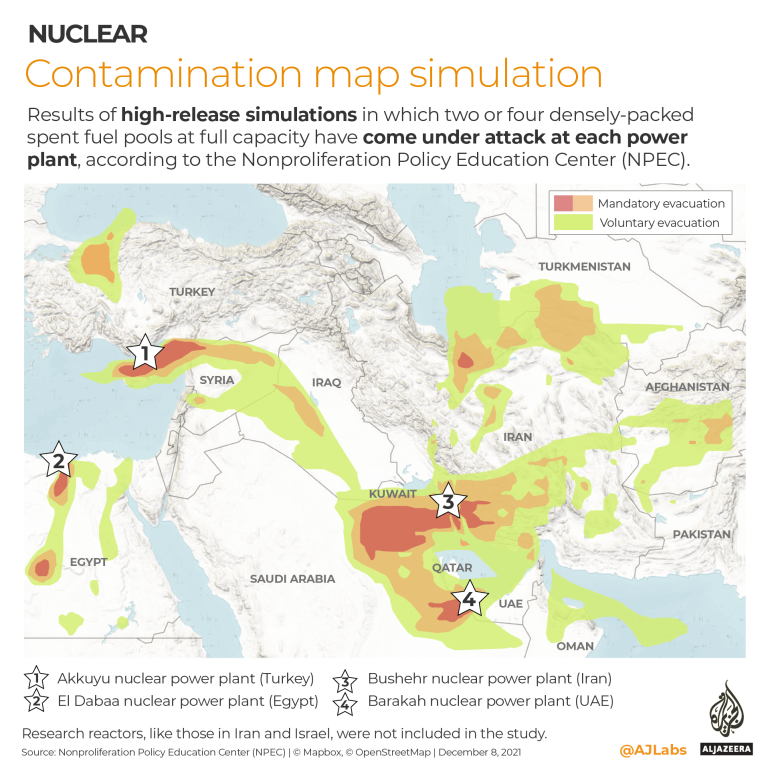 “This alarming image should prompt nations to carefully evaluate and mitigate the risks and plausible consequences of constructing and operating nuclear power reactors,” said the report.

Why the Middle East?

As efforts accelerate to decarbonise the global economy, policymakers the world over are considering connecting new or additional nuclear power to their electricity grids.

The Middle East is no different. Last year, the United Arab Emirates became the first Arab nation to join the global commercial nuclear power club after the first of four planned reactors at its Barakah nuclear facility in Abu Dhabi went online. That unit was connected to the grid this year. A second reactor at Barakah has since been connected to the grid while construction of a third reactor was completed last month.

Iran currently has one commercial nuclear power reactor in operation, Bushehr 1, with construction having started on a second reactor there in 2019. The country has also announced plans to build additional nuclear power facilities.

Given the increased interest in nuclear energy in the Middle East, its unique history of air strikes on nuclear facilities, and the emergence of non-state actors wielding advanced military firepower, NPEC believes that any cost-benefit analysis of commercial nuclear power plants in the region needs to include a public disclosure of the potential radiological fallout and population displacements that could result from a successful aerial strike on a facility.

“There have been no fewer than 13 air strikes since the very early 80s against a variety of [nuclear] reactors [in the Middle East], mostly by air forces and attempts with very inaccurate missiles like Scuds,” said Sokolski.

He added that aerial strike technology has come a long way since the early 1980s, when Israel and Iran bombed Iraq’s Osirak reactor, or even 2007, when Israel destroyed a suspected reactor under construction in Syria.

“Missiles and drones with high accuracies of 1-10 meters, one thousand times more accurate than during the 1990s,” are available to both state and non-state actors, the report warns.

That was on display in September 2019, when a barrage of drones and cruise missiles evaded Saudi Arabia’s state-of-the-art air defences to hit Saudi Aramco’s oil facilities at Khurais and Abqaiq. That attack, which was claimed by Houthi fighters, temporarily knocked out roughly half of the kingdom’s oil production.

To illustrate the potential vulnerability of a nuclear power facility to a high precision missile strike, NPEC analysed four current and planned nuclear power plants in the region for three scenarios involving the radiological release of caesium-137 (Cs-137) into the atmosphere.

“Caesium-137 is one isotope that is particularly concerning for several reasons and it’s one of the most common isotopes looked at when evaluating the danger of a nuclear accident or some kind of radioactive release,” the report’s lead researcher Eva Lisowski told Al Jazeera. “It’s dangerous enough and lasts long enough that it can cause a significant increase in the chances of developing cancer.”

Significant contamination with Cs-137 can result in hundreds of thousands of people being evacuated from their homes, the report warns, and they may not be able to return for decades, given it has a 30-year half-life. 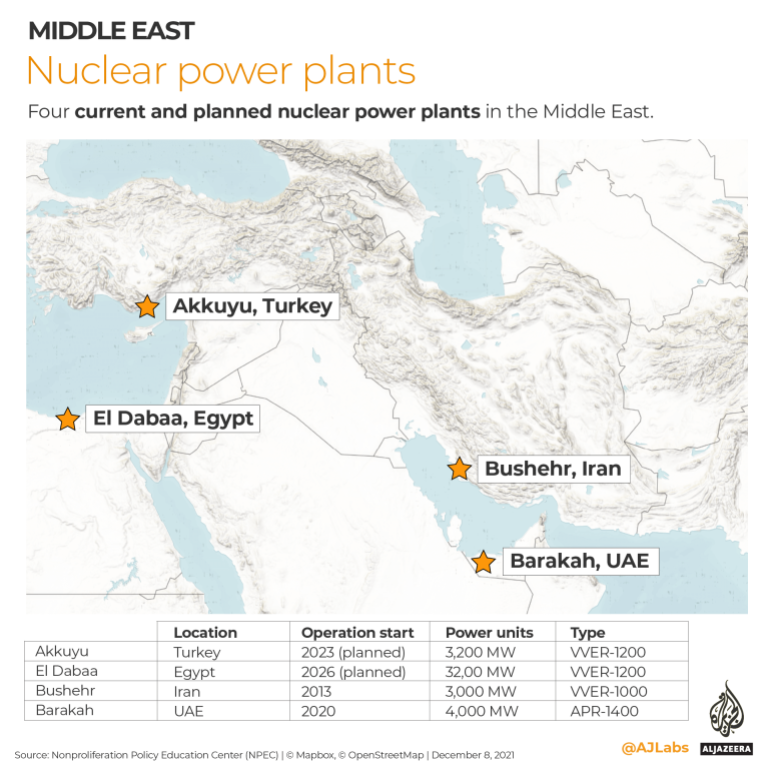 The four facilities chosen for the scenarios include the UAE’s Barakah power plant, Iran’s Bushehr, the plant under construction at Akkuyu in Turkey, and the site of Egypt’s planned commercial nuclear power station at El Dabaa.

Sokolski also notes that containment buildings and spent fuel ponds are not the only targets for potential sabotage.

The amounts of Cs-137 released in each scenario, as well as the estimated number of evacuees in each contamination zone, were simulated for four different months of the year based on 2020 weather patterns: March, June, September and December.

The simulations all include neighbouring countries that could be affected by mandatory evacuations.

The report examined scenarios for both a large release of Cs-137 (75 percent) and a smaller release (10 percent or 5 percent) to illustrate the potential differences between a densely-packed spent fuel pool catching fire, versus one that is not full.

The amount of nuclear material stored in a spent fuel pond is equivalent to several reactor cores, making it potentially a far more destructive target. But the report notes that none of the reactors involved in the simulations have densely packed spent fuel ponds at this time and that the first ones won’t reach full capacity until 10 to 20 years after commercial operations begin. 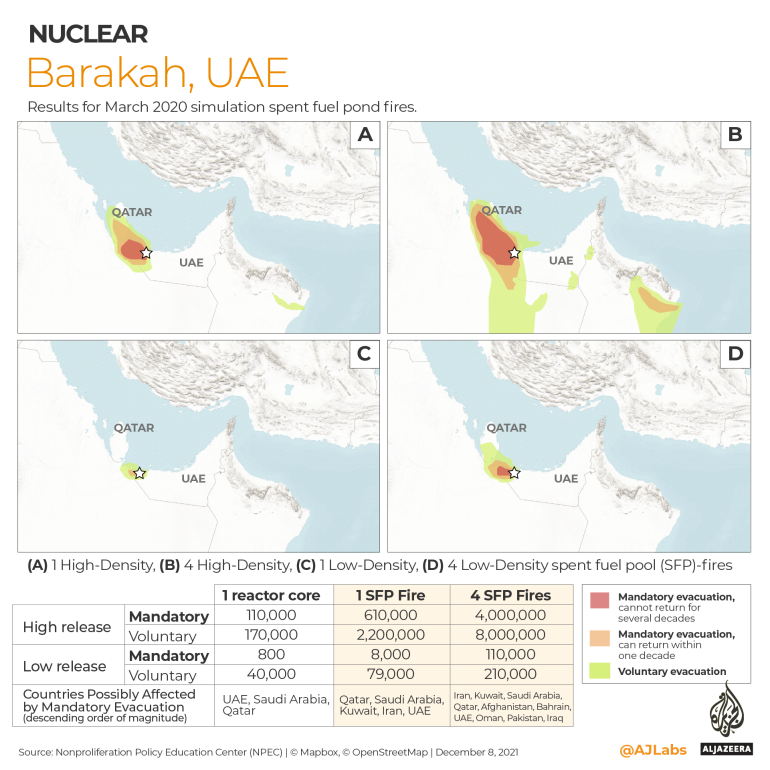 The three scenarios involving a missile or drone attack on the Barakah nuclear power plant predicted average population displacements ranging from 800 mandatory and 40,000 voluntary evacuations in a low-radiological release simulation involving a core breach, to 4 million mandatory and 8 million voluntary evacuations if a densely packed spent fuel pond is hit resulting in a high release of Cs-137. 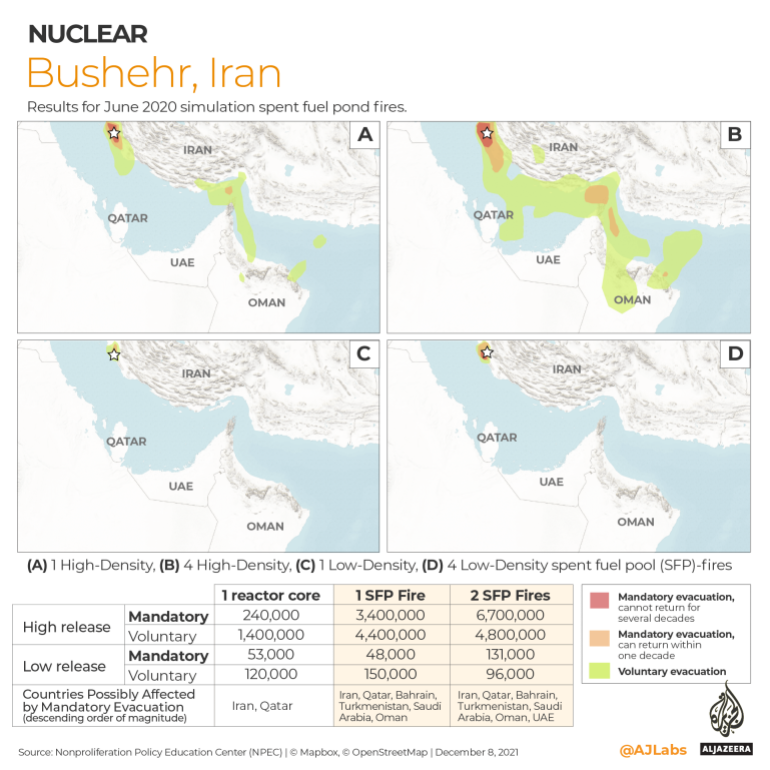 The three scenarios involving a missile or drone attack on the Bushehr nuclear power plant predicted average population displacements ranging from 53,000 mandatory and 120,000 voluntary evacuations in low-radiological release simulation involving a core breach, to 6.7 million mandatory and 4.8 million voluntary evacuations if a densely packed spent fuel pond is hit resulting in a high release of Cs-137. 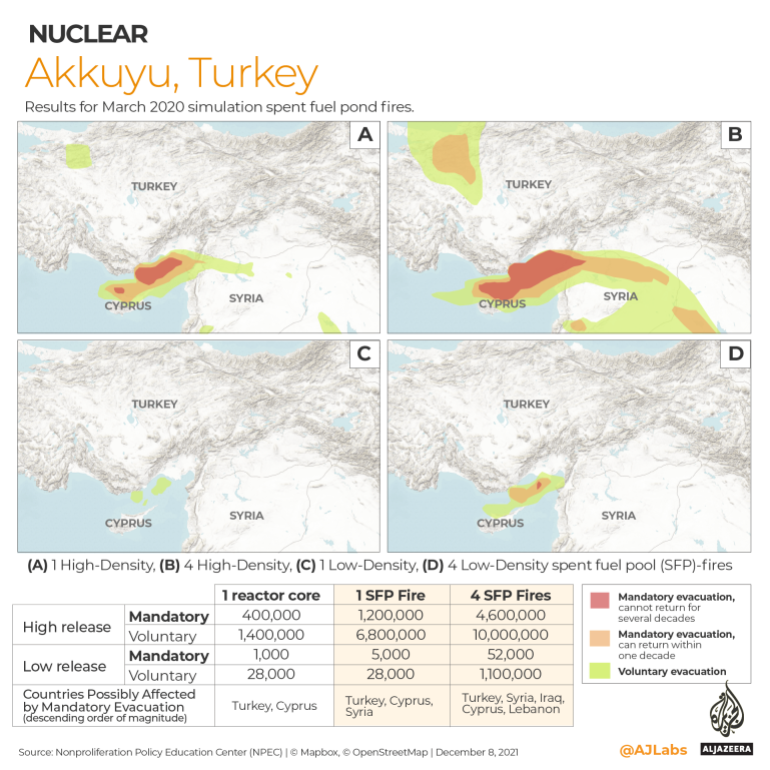 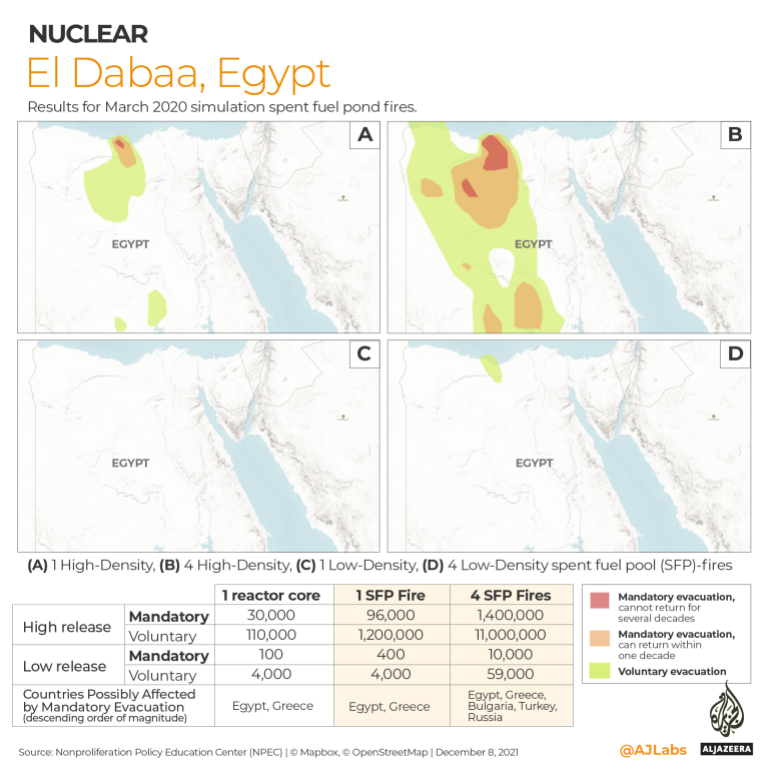