Deaths in South Africa mines, which include the world’s deepest gold and platinum operations, rose for a second consecutive year as worker safety deteriorated.

The toll so far in 2021 was 69, up from 48 a year-earlier, the Department of Mineral Resources and Energy said in a statement Monday. In 2019, 51 people died over the whole year, the lowest number of fatalities on record, before climbing to 60 last year.

Miners are looking to improve safety practices to address the falls of ground and transport-related accidents that were the leading causes of death as the sector, the ministry said in the statement, which was jointly issued with the Minerals Council South Africa. The industry, which employs more than 450,000 people and accounts for about 8% of the economy, has previously seen declining fatalities over several decades. 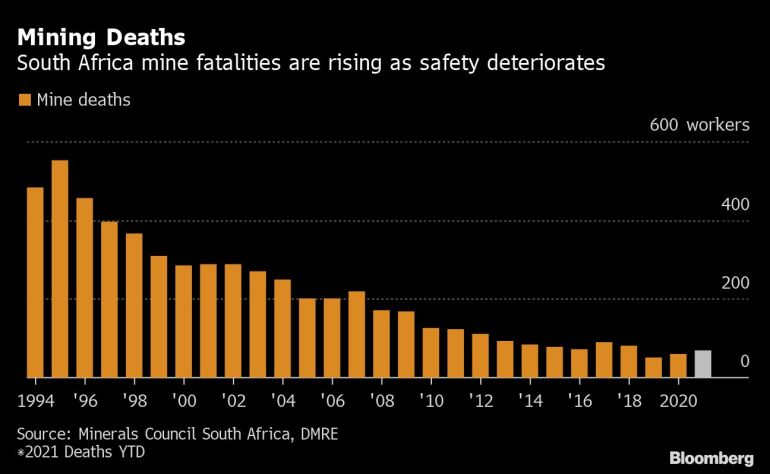 “This is the second consecutive year of regression in fatalities and the industry’s stakeholders have committed to urgently address the unacceptable situation,” they said.

Sibanye Stillwater Ltd. said on Friday that four workers died in two separate incidents at its platinum and gold mines, raising the 2021 death toll at its operations to 18. Rival miner Impala Platinum Holdings Ltd. also reported four fatalities in recent days after two incidents at its mines in Rustenburg.

(Updates with comment from ministry and minerals council in fourth paragraph)