New Year’s Eve air travel got off to a bumpy start Friday morning, with more than 1,300 flights canceled in the U.S. and 1,000 scrubbed for Saturday.

JetBlue Airways Corp. had scratched 145 flights, or 14% of its schedule, by 12:17 p.m. in New York, according to FlightAware.com, while Allegiant Travel Co. canceled 91 flights, or 19%. United Airlines Holdings Inc. had scrubbed the most flights among U.S. carriers, 210, representing 11% of its service.

Total cancellations came to 1,359 Friday, and 1,001 were already off the boards for Saturday. The pace of cancellations slowed substantially after midmorning, as occurred on Thursday as well.

Carriers have been struggling with staffing shortages as the coronavirus omicron variant caused infections to jump. The New York City area, where the variant made its initial incursion into the U.S., has borne the brunt of cancellations over the last two days. 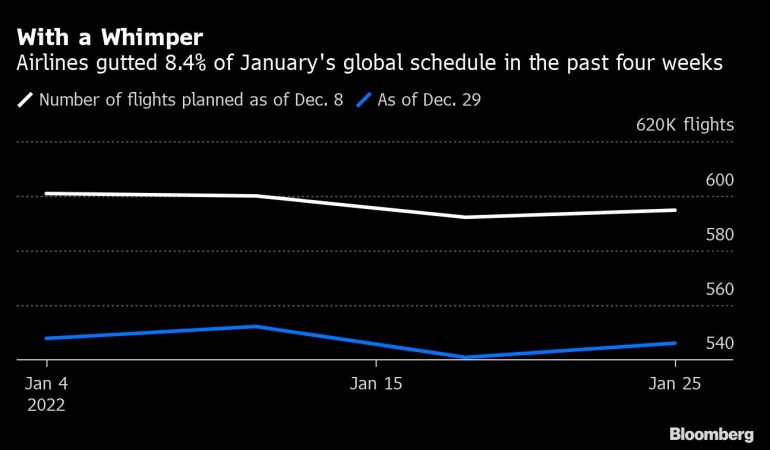 “You have a high level of vaccination among airline employees and yet, because of omicron, I think the absenteeism is higher than you would have expected,” Raymond James analyst Savanthi Syth said on Bloomberg Television. Airlines have been caught by surprise “at a time where you also have been having some winter weather issues across the U.S.”

Air travel in the U.S. is about twice the level of last year, before vaccinations made flying safer. The Transportation Security Administration screened 2.05 million passengers on Thursday.

The National Weather Service warned that severe conditions will usher in the New Year, with moderate-to-heavy snowfall expected in the Western mountains. Totals could exceed 3 feet in the highest elevations of Utah and Colorado. Hazardous travel conditions are forecast for New Year’s Day from the Central Plains to the Great Lakes.

Not all carriers were hit hard Friday. Delta Air Lines Inc. cut 5% of its flights by midday, and American Airlines Group Inc., 1%, according to FlightAware.

Flying this weekend? Lots going on in the skies that could impact your travel plans.
-Heavy holiday travel
-Weather across the country
-And Omicron
Check with your airline before you head to the airport for flight status. Check airport status at https://t.co/smgdqJN3td. #FlySmart pic.twitter.com/Ac4hUIxrdA

Border restrictions tied to the case surge damped the outlook for global travel as well. Cathay Pacific Airways Ltd. almost halved the number of flights into Hong Kong from outside China next month. British Airways plans to scrap flights to the territory through March.

The impact looks set to persist well into the new year. Airlines worldwide eliminated about 8.4% of the flights they had planned for January during the past four weeks, based on data from BloombergNEF, which tracks demand for jet fuel.

The drop is even more severe in Europe, at 15% of January flights canceled, after some countries imposed new restrictions on cross-border travel to try to stem the spread of omicron.