The Bank of England unexpectedly raised interest rates for the first time since the pandemic struck, setting aside the threat to the U.K. economy posed by record coronavirus cases to become the most high-profile central bank to take on surging inflation.

Officials led by Governor Andrew Bailey voted 8-1 to lift borrowing costs by 15 basis points to 0.25%, delivering an increase that no other Group of Seven central bank has made since the start of the crisis. Silvana Tenreyro was the sole dissenter. Policy makers said more “modest” tightening is likely to be needed as inflation heads toward a peak likely to be around 6% in April. 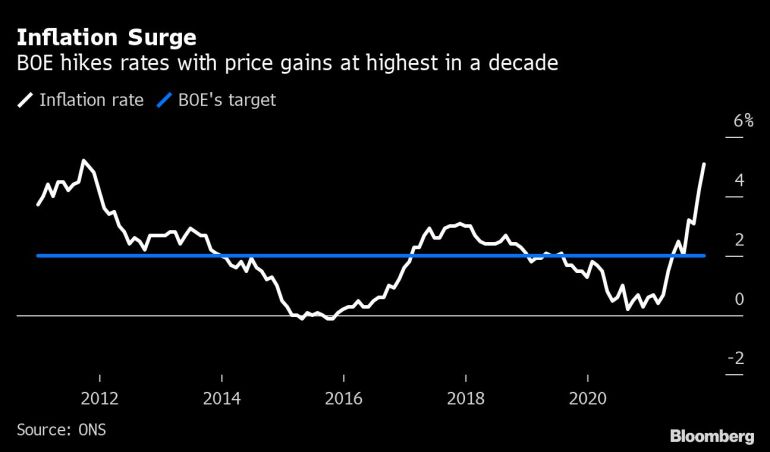 The pound rallied as much as 0.8% while U.K. 10-year yields jumped 5 basis points after the decision. Traders now see the BOE’s key rate rising to 1% by September.

The U.S. Federal Reserve already set a hawkish tone on the eve of the BOE announcement by signaling three rate hikes next year and accelerating the wind down of its stimulus program, while Norway kept up its own tightening effort on Thursday with its second increase this year.

The BOE’s precipitous shift into tightening mode will surprise the large majority of economists who anticipated no change, and investors who were pricing in around a 40% chance of a move. The outcome was the second in a row featuring a surprise after November’s decision to stay on hold wrong-footed financial markets.

The BOE hike is a response to the danger posed by surging prices gains, with a report this week showing inflation jumped to 5.1% in November – more than double the central bank’s target – and a separate report Tuesday showing U.K. companies added to payrolls at a record pace.

Considering that backdrop, Goldman Sachs Group Inc. Chief European Economist Jari Stehn told Bloomberg Television just hours earlier that an outcome of no change was “not a done deal,” even though it was his main expectation. 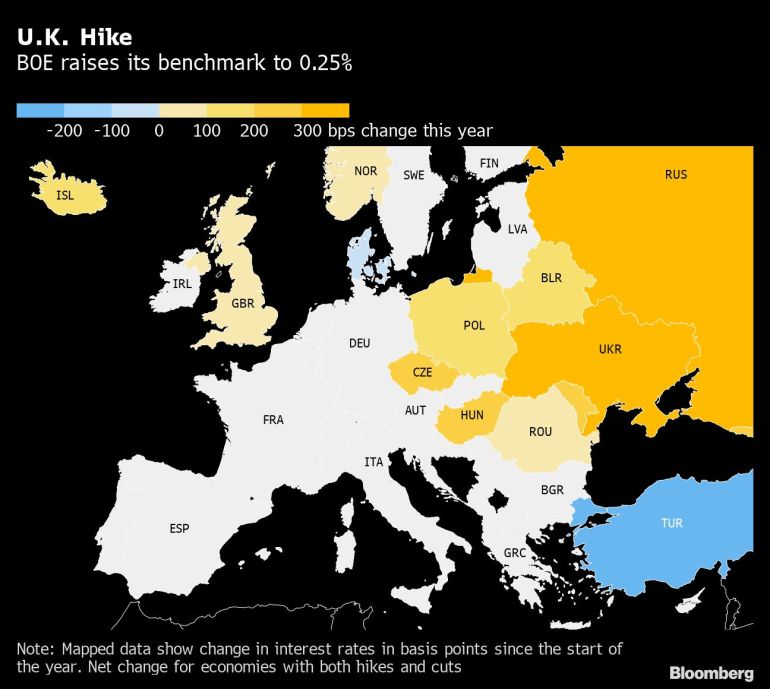 The decision to move now is all the more remarkable since the country is in the grips of a new coronavirus wave driven by the more infectious omicron variant, which has pushed daily case loads in the U.K. to the highest recorded total since the pandemic began.

The danger that poses in potentially overwhelming the country’s health services is such that Prime Minister Boris Johnson’s government has reintroduced some curbs on activity, with more possible in coming days and weeks if the outbreak can’t be quelled.

By moving now, the BOE heeded a warning this week from the International Monetary Fund, which cautioned against policy inaction on inflation.

The increase is the first from the BOE since 2018 and comes a day after officials wrapped up their pandemic-era quantitative easing plan. The buying has left the central bank’s holdings of government bonds at 875 billion pounds ($1.2 trillion), from 435 billion pounds before the crisis hit.

The central has only hiked rates once in December in the past 45 years, and never since it was granted independence in 1997.

Outside of emergency actions during the pandemic, it’s also the first time officials have moved at a meeting that isn’t a so-called “Super Thursday,”– the nickname for the quarterly events when the BOE simultaneously publishes its decision, minutes and forecasts — since they were introduced in 2015.

Later on Thursday, the European Central Bank is due to explain its own plan for moving on from emergency stimulus. President Christine Lagarde has been at pains however to persuade investors that a rate increase in the euro zone isn’t going to happen any time soon.